The Best Memes, Tweets, and Reactions to the Second Clinton vs. Trump Presidential Debate 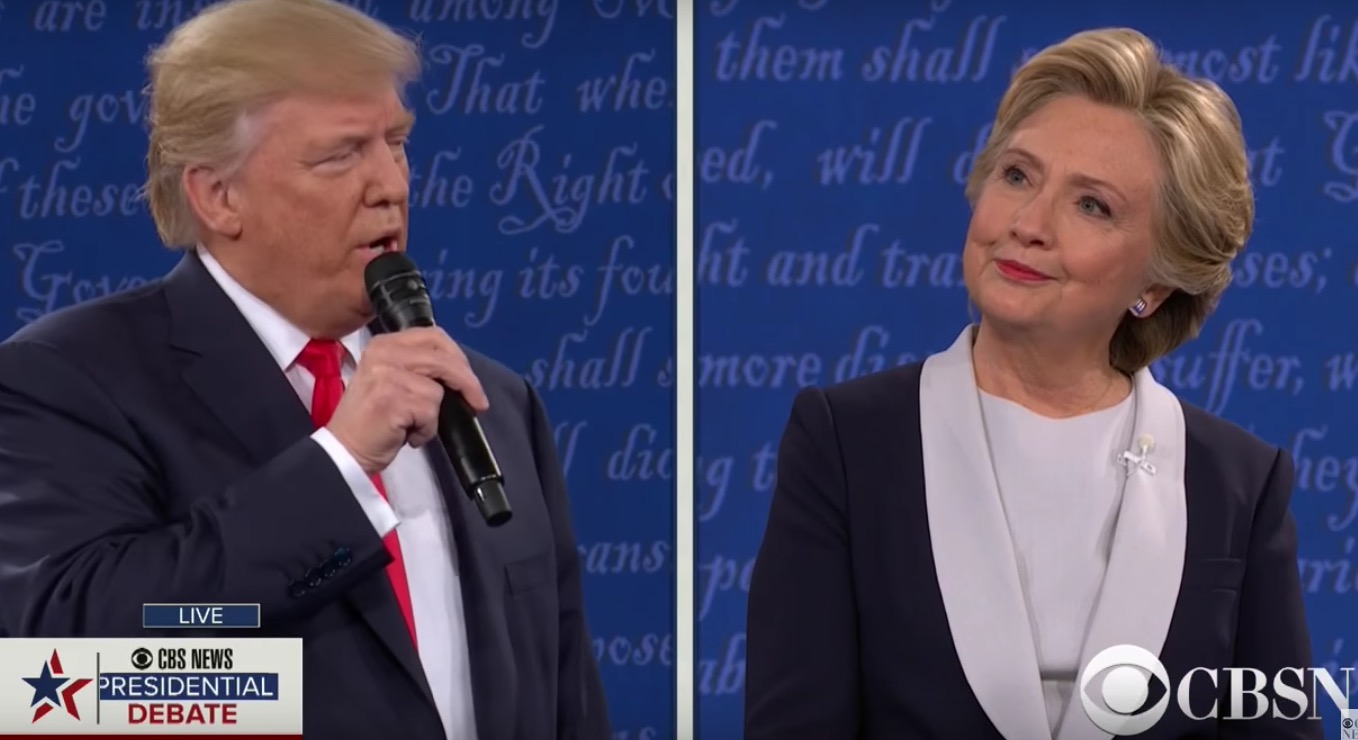 This weekend was a crazy one for U.S. politics. Things kicked off Friday when a tape came out with Trump in 2005 bragging that he could sexually assault women and get away with it. That kicked off a firestorm that saw him losing support from other Republican politicians—a ridiculous turn considering that Trump has shown himself to be plenty racist and sexist already—and culminated in last night’s presidential debate. (Replay here if you’re some kind of masochist.)

Last night was like watching two people who’d prepared a group presentation get up to deliver it, where only one of them had clearly done all the work, while the other knew only the subject headings and then rambled about them incoherently (and also lied a whole bunch). Polls—not the ones gamed by 4chan users—back this up, just like after the first debate. Do not be fooled by the idea that Donald Trump “won” just because he didn’t literally spontaneously combust on stage, which is only one small step of hyperbole away from how low a lot of people actually set the bar for him.

Now, on to the comedy! First up is my personal favorite. The debate audience was supposed to be made up of undecided voters, but this guy appears decidedly decided:

I think this dude just flipped to “decided voter” pic.twitter.com/h6WRytOhEs

Then there was Trump looming behind Clinton menacingly while she appeared unaware (probably because she was doing her best to ignore his obnoxiousness all night):

(Check out Pajiba for more.)

Let’s also use this opportunity to remember that Trump fielded a question about Islamophobia by placing the onus on Muslims to report terrorism, because that’s a thing he thinks Muslims have inside info on. #MuslimsReportStuff took off.

Then there was Trump’s relationship with his chair, which … I’m sorry you won’t be able to un-see this.

Hillary Clinton get’s serious on policy during last night’s #debate whilst Donald Trump gets even more serious with the chair. pic.twitter.com/VVQfSzX3t5

This moment Donald Trump had with his #debate chair inspired a hilarious Photoshop battle https://t.co/PXHIBBOMp7 pic.twitter.com/o6PBDnVMtF

So what exactly is Trump doing to that chair? Actually, don’t wanna know pic.twitter.com/PMiJDP2paM

At best, Trump looks like he’s completely zoning out and just waiting for his turn to talk. At worst … yikes. You can find Photoshops of that one all over the Internet by now. I’m so sorry.

Anyway, Trump also mentioned his “extreme vetting” process for trying to keep people out of America based on ideological assessments—one of his more fascist proposals.

THIS is the kind of extreme vetting I’m into. #debates pic.twitter.com/0rgbaDowjE

Then there was walking meme Ken Bone and his epic sweater.

“How will you protect my job as a card in Guess Who?” #debates pic.twitter.com/KZ3N1Xhq4O

When Ken Bone’s mother dressed him for tonight, do you think she even imagined her son would become a living meme?

He’s a good sport about it, btw. (I think. Unless this account is fake, in which case we riot!):

Finally, there was the duet/rap battle between Clinton and Trump:

I love all of the pictures from the debate because they all look like either the best or the worst rap battle of all time. pic.twitter.com/yuuilSvBBV

(Mediaite has a few more variations of this one.)

And, of course, the infinite variations of each of these jokes that you can now find strewn across the Internet like pieces of our shattered dreams of the future.

A live look at Anderson Cooper off camera #debate pic.twitter.com/1sabUTLE5Q

Have a great week, America!