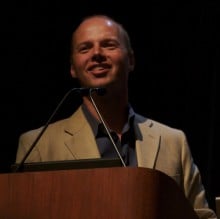 Researcher and professor Sebastian Thrun turned a lot of heads when he headed a bold experiment in online teaching at Stanford University by offering an artificial intelligence course for free. Of the 160,000 enrollees, 23,000 graduated the course with a Stanford University certificate and a head full of computer science knowledge. The experience of teaching a course on such a massive scale apparently left its mark on Thrun as well, who announced today at the Digital Life Design conference that he was leaving Stanford and was heading up a new free education project called Udacity.

Like the Stanford course, Udacity will be focused on computer science courses taught at the university level and free of charge. There are currently two courses available. The first, CS 101: Building a Search Engine, will require no previous knowledge of programming and aims to teach the fundamentals of computer science in seven weeks. It will be taught by Thrun and University of Virginia professor Dave Evans. The second course is a follow up to the Stanford AI course called CS 373: Programming a Robotic Car, and will certainly touch on Thrun’s passion of driverless vehicles.

The motivation to take free education to a new level was for Thrun a matter of true urgency. I Programmer quotes Thrun as having said:

Now that I saw the true power of education, there is no turning back. It’s like a drug. I won’t be able to teach 200 students again, in a conventional classroom setting.

And not just more people, but people of all walks of life and from all over the world. Moreover, Thrun believes that his online teaching techniques surpass interaction in a physical classroom. He points out that during the original Stanford course, his 200 person class dwindled to 30 people. Thrun said that this was a testament to the intimacy and success of online teaching, though it’s just as likely they preferred being able to sleep in.

Snarking aside, Thrun believes that his approach is a better way to teach. Felix Salmon with Reuters writes:

Thrun was eloquent on the subject of how he realized that he had been running “weeder” classes, designed to be tough and make students fail and make himself, the professor, look good. Going forwards, he said, he wanted to learn from Khan Academy and build courses designed to make as many students as possible succeed — by revisiting classes and tests as many times as necessary until they really master the material.

While Udacity certainly looks like a positive step forward for free online education, and for increasing the computer science knowledge base — something that our society badly needs — it lacks one thing that the Stanford course had: Name recognition. No doubt many people signed up for the Stanford class simply for the love of learning, but the promise of a certificate from a well known university was likely a major incentive as well.

Even though Thrun talks about reaching 500,000 students with his next course, he’s also espousing a fairly utopian view of education where the learners want to learn and the teachers want to teach. Conventional wisdom would have us believe that only small groups of passionate individuals could make that happen. Thrun has, however, already done the unthinkable with his Stanford course, and perhaps he will again.

(Udacity via Slashdot, Reuters, I Programmer, image via Wikipedia)