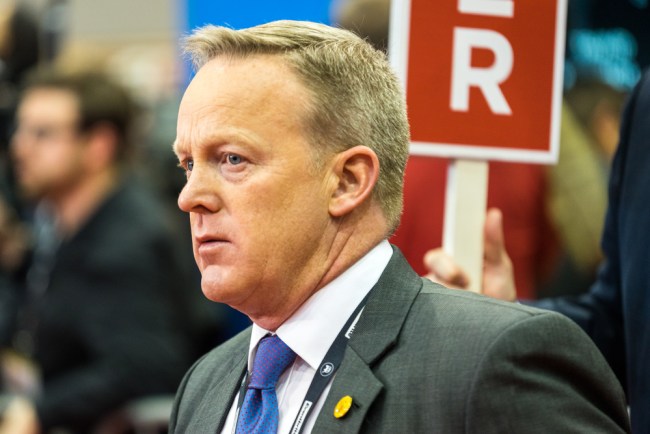 We all deserve a brief laugh as we process the tinpot-dictator horror of Trump’s sudden, suspicious firing of FBI Director James Comey – and White House Press Secretary Sean Spicer delivered that comic relief on Tuesday night. In order to avoid answering questions about the firing, Spicer hid in the bushes with his staff, and then, when the Washington Post reported on it, someone demanded that they update their story to clarify that Spicer was “among” the bushes rather than “in” them. Okay…

Now, the internet has memefied Spicer’s ineptitude for the real-world, just in time for spring! People’s hero Lisa Kadonaga shared cutout templates of Sean Spicer’s head on Facebook and Dropbox, allowing users to create their own lawn ornaments of the Press Secretary peeping out from behind shrubs, bushes, and flowers. Kadonga has dubbed her creation the “Garden Spicer.”

The “decoration” has since taken off.

Seen in my FB feed: Some lady made a cutout of the top half of Spicer’s head and is sticking it in random bushes pic.twitter.com/R7WHodwbx7

Made myself a Garden Spicer while my husband was in the shower. Let’s see if he notices it! pic.twitter.com/gK3gx4SGVP

Holy shit!! Someone put @seanspicer in a bush off the freeway! 😂😂😂 pic.twitter.com/Qi1P6oN6n2

Enjoy, TMS readers, and adorn your lawns, windowsill flowers, and apartment-corner succulents as you see fit.

(Via Mic and the Los Angeles Times; image via Shutterstock)