Baking Bread with 4,500-Year-Old Ancient Egyptian Yeast Is a Pursuit We Can Appreciate 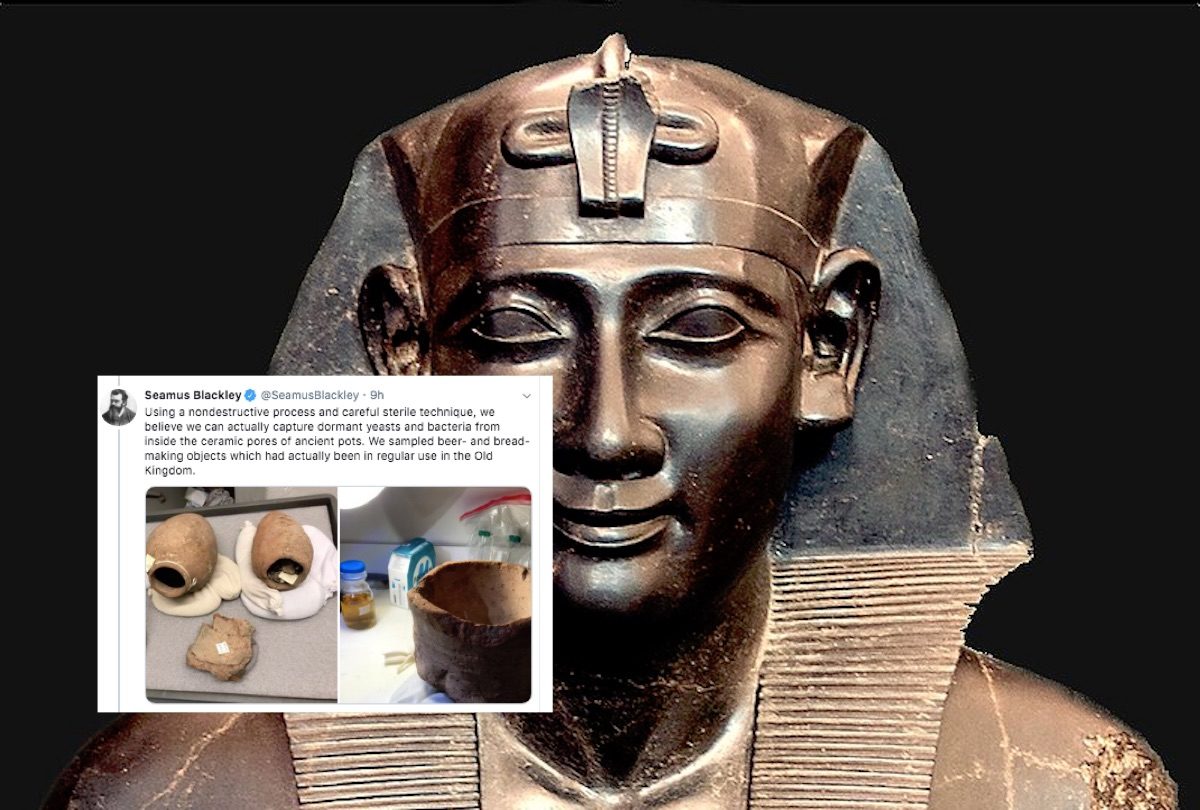 On Twitter, physicist (and “father of the X-Box”) Seamus Blackley shared his adventures in gastroegyptology, which is a thing I have just now learned about! Blackley recently worked with specialists in order to bake a rather unique bread fit for a Pharaoh, and it’s hard not gaze in wonder at what science hath wrought.

Blackley, a former video game designer and producer who was instrumental in the development of the X-Box at Microsoft, also calls himself an “amateur gastroegyptologist” in his Twitter bio. Along with Egyptologygist Dr. Serena Love and microbiologist Richard Bowman, Blackley & co. visited museums to harvest 4,500-year-old yeast samples from Ancient Egyptian vessels. Blackley’s subsequent raising of the organisms from the dead for doughy purposes is the ultimate combination of science-meets-whimsical curiosity, and I love it.

Bowman will analyze the samples to determine which “which microorganisms are old and which are modern contaminants,” so it’s not 100% clear yet what the team came back with. But that didn’t deter Blackley from cooking up a sample that he kept.

Two weeks ago, with the help of Egyptologist @drserenalove and Microbiologist @rbowman1234, I went to Boston’s MFA and @Harvard’s @peabodymuseum to attempt collecting 4,500 year old yeast from Ancient Egyptian pottery. Today, I baked with some of it… pic.twitter.com/143aKe6M3b

Using a nondestructive process and careful sterile technique, we believe we can actually capture dormant yeasts and bacteria from inside the ceramic pores of ancient pots. We sampled beer- and bread-making objects which had actually been in regular use in the Old Kingdom. pic.twitter.com/9FahMRjJBU

We took many samples and will continue to build our sample library over the next year or so. This is important as we need to learn which microorganisms are old and which are modern contaminants. Samples go to @rbowman1234 for rigorous analysis EXCEPT I was naughty and kept one… pic.twitter.com/cAIGmGcIJO

Here is a large batch of starter, carefully made from the Old Kingdom sample, added to water and some unfiltered olive oil. The idea is to make a dough with identical ingredients to what the yeast ate 4,500 years ago. The aroma of this yeast is unlike anything I’ve experienced. pic.twitter.com/vf6QwKZmFi

This crazy ancient dough fermented and rose beautifully. Here it is in the basket, just before being turned out to bake. The ancient Egyptians didn’t bake like this- you’ll see- but I need to get a feel for all this so I’m going conventional for now. pic.twitter.com/lcGnOsaT9n

And here is the result. The scoring is the Hieroglyph representing the “T” sound (Gardiner X1) which is a loaf of bread. The aroma is AMAZING and NEW. It’s much sweeter and more rich than the sourdough we are used to. It’s a big difference. After this cools we will taste! pic.twitter.com/sYCJ8uP1oj

The crumb is light and airy, especially for a 100% ancient grain loaf. The aroma and flavor are incredible. I’m emotional. It’s really different, and you can easily tell even if you’re not a bread nerd. This is incredibly exciting, and I’m so amazed that it worked. pic.twitter.com/qGRmi2Yg8Y

Finally, I need to say again, this was just for practice. @rbowman1234 needs to isolate and characterize the samples before we know for sure this is real. @drserenalove and I need to teach ourselves to actually bake like Egyptians. BUT ITS NOT A BAD START! Good Night! pic.twitter.com/ZkgeTqvloC

There are also practical applications to the experiment, including, as a Twitter user on Blackley’s thread points out, potentially low-gluten grains. As Blackley reminds, further analysis will be needed to know if they’ve isolated the ye olde yeasties they desire. Whatever Blackley did bake, however, sounds and looks uniquely tasty.

Yes. But first more work to be sure we have what I HOPE we have. Science.

Of course, people are already having fun with the subject matter in Blackley’s thread.

Until we hear more, we’ll remain cautiously optimistic—emphasis on cautious.

Do you have the tastebuds of an adventurer? Would you want to snack on ancient bread? While I’m not usually the boldest of eaters, I’d be ready to try this with a wedge of cheddar. The idea of biting into the past, and savoring flavors no one has known for millennia, has an exciting appeal that’s hard to resist.