SDCC 2017: On the Hunt With the Stars of Shadowhunters | The Mary Sue

SDCC 2017: On the Hunt With the Stars of Shadowhunters: The Mortal Instruments 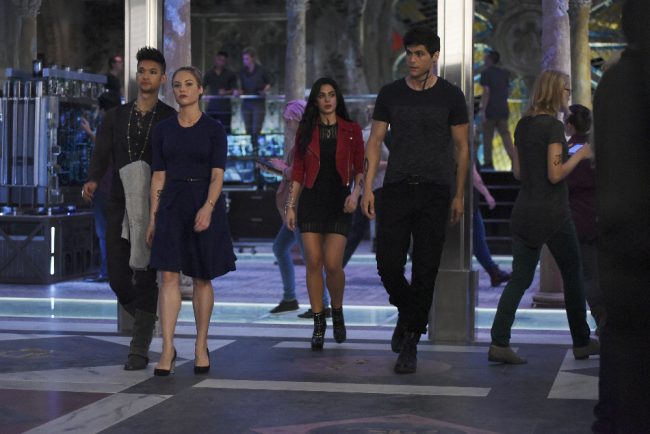 Nerds have always considered themselves outsiders, and sci-fi stories like Star Trek have always been on the forefront of promoting diversity and acceptance, but it hasn’t been until recently that convention culture has caught up with those ideals. On the first day of San Diego Comic Con this year, it was clear that acceptance and diversity is not just the norm on stage and screen but expected, celebrated and championed by audiences and creators alike. This was absolutely evident when one of television’s most diverse and subtly progressive shows made its Comic-Con debut to the delight of fans: Freeform’s Shadowhunters: The Mortal Instruments.

Since its 2016 debut, Shadowhunters has become a bona fide phenomenon. This wasn’t inevitable, given the less than stellar success of the first attempt to adapt Cassandra Clare’s series of novels: 2013’s The Mortal Instruments: City of Bones starring Lily Collins. However, the television series format has worked perfectly for the complex subject material and Shadowhunters has been steadily gathering steam both in terms of the overall quality of the show and the passion of fans. Now airing the second half of season 2, the cast climbed geek Everest for their first appearance at San Diego Comic-Con on Thursday in the Indigo Ballroom of the Hilton Bayfront.

The audience in the Indigo was primed for the Shadowhunters cast and producers, following a raucous panel by geek icon John Barrowman and a presentation by Shadowhunters‘ network sibling Stitchers. Once the cast and producers were on stage, it became immediately clear why Shadowhunters has found a loyal an passionate fanbase. The cast is charming and funny, and they truly love and appreciate their characters and the fans as well. The story of Clary Fray—or Fairchild, or Morgenstern, depending on the day—played by Katherine McNamara, and her journey into the world of Shadowhunters–half angelic being that first against demons and others from “the downworld”–is full of romance, angst, and action, not to mention a diverse background full of attractive werewolves, vampires and warlocks. Fans lined up at 4 AM to get a chance at cast autographs and the love in the room was evident.

The Comic-Con audience was thrilled by a first look at Sarah Hyland as the devious Seelie Queen, and were excited about the news that fan favorite Alisha Wainwright, who portrays werewolf Maia, had been promoted to a series regular. The cast in attendance included McNamara, Dominic Sherwood (Jace), Alberto Rosende (Simon), Emeraude Toubia (Isabelle), Matthew Daddario (Alec), Harry Shum Jr. (Magnus) and Isaiah Mustafa (Luke). They answered fan questions and hinted at the high drama and heartbreak in store for the final episodes of season two. Of particular interest to fans was the continued happiness—or lack thereof—of the fandom’s favorite couple, Magnus and Alec (or ‘Malec’). Whereas some other shows simply toy with subtext, Malec is at the forefront of the story a a canon queer romance. Not only does Shadowhunters showcase a same sex relationship as one of its most prominent love stories, it features characters and actors of all ethnic backgrounds as well as all sexualities, including a recently revealed asexual character.

After the panel, I sat down with the cast and producers to chat about their first SDCC and the importance of show’s commitment to representation. Alberto Rosende, who plays Jewish vampire Simon was enthusiastic when the show’s diversity was raised. “It’s a tremendous opportunity and a tremendous responsibility,” Rosende said of playing a character whose Jewishness is not a throw away detail, but a key aspect of his life. Growing up, Rosende looked up to Latino actors and knows the impact that seeing one’s self represented on screen can have. “We’re doing it well, it’s not just part of a joke,” he said. Similarly, Emeraude Toubia noted that she and Rosende are part of a new generation of Latino actors who were raised in the U.S. and play characters who aren’t Latino, with her and Rosende being prime examples. Toubia stated that, “It just shows you how Hollywood is changing and how the world is changing.”

While their sexuality does come up, especially in terms of others’ acceptance of Alec, the greater conflicts come from the same issues any couple faces–trust, communication, and work stress. In this case, though, when the “work stress” is dealing with a possible downworld uprising, it’s maybe not exactly like a normal relationship. Still, the fact that Malec is simply another story among many that audiences can engage with is an important step. Daddario recalled a story from a fan who was afraid to come out until his mother said how much she loved Malec. “I really like that … to make it so that it changes people’s minds,” Daddario said.

The diversity on the show is not accidental, according to producers Todd Slavkin and Darren Swimmer, along with producer-director Matt Hastings. The diversity in casting is “100% a priority,” according to Slavkin and they will continue to add to it in coming seasons, including the introduction of another Latino character, Bat Velasquez. They also spoke about more screen time for the recently introduced lesbian (and Asian) character, Aline. Slavkin noted that even what they have now is “not enough” and especially at this time in history, diversity is important. Hastings echoed the same sentiment saying, “There’s a great degree of social relevance to this show. We have a responsibility to everybody.” A show like this is important because “the world has changed dramatically, and we’re waiting for some of the world to catch up.” To hear producers and stars alike understand the importance of their stories and the impact representation can have on audiences young and old is inspiring.

Diversity still needs good stories to keep audiences engage, and from the preview shown at the panel and the comments of the cast, it seems we have a great deal of drama to look forward to in the final episodes of the season. Dominic Sherwood teased that the end of the season is “really dark and gritty” and McNamara said, “All of us are really excited for these last two episodes because it’s some of our favorite stuff that we’ve ever done on the show.” Hastings described the finale as being on the scale of a movie, and hinted that season three will be just as grand and dramatic. As the season finishes and season three begins, one thing is for sure: fans will continue to see the diversity and the drama that they love.