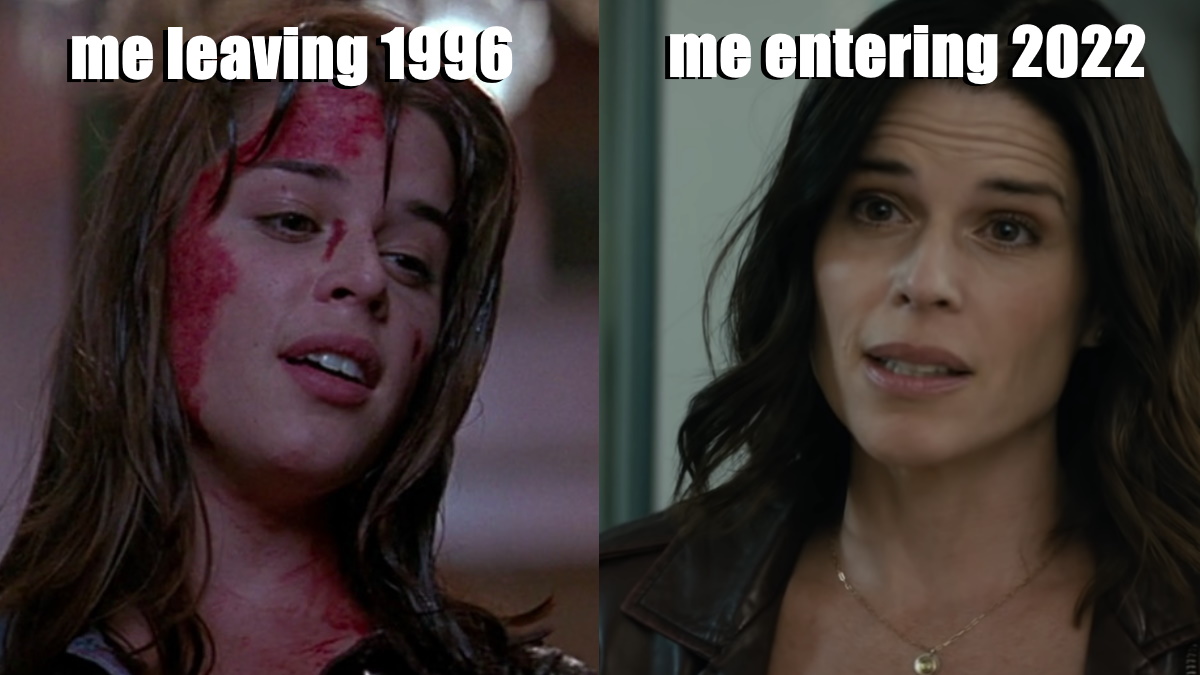 With the latest installment of the Scream franchise set to release tomorrow, I thought I would take a look back on the movies that made me thankful for caller ID back in the 90s.

Back then, my friends and I weren’t as savvy about movie tropes as we are now, so watching a horror movie that commented on the tropes in horror movies while dealing with said tropes of horror movies was pretty great. Also? Watching Sidney Prescott go from victim to, according to the upcoming release, “I’m Sidney Prescott, of course I have a gun,” makes me feel like I’ve grown up watching the evolution of a horror movie badass. I like seeing a final girl who is so aware of being a final girl that she makes sure to check behind her, in front of her, left, right, above, and below.

I’m going to start with my favorite film and work my way down to my least favorite in preparation for the fifth installment of the series.

Scream, at the time, was one of the most relatable horror movies I’d seen. I was used to the supernatural baddies like Freddy Krueger or the ridiculously overpowered like Michael Myers or Jason Voorhees, so seeing high schoolers dealing with killers who ended up being their own classmates was a fresh take on the genre that terrified me so much. Now the horror was in a more relatable setting, granted, as a Black girl from Chicago there was no way in hell I’d ever have parents who leave me alone during something like Scream.

While I know what to look out for when watching a scary movie these days, when Scream premiered in 1996 I had, well, a vague idea. However, the things I was certain about ended up being subverted. I thought for sure that Drew Barrymore being on the cover meant that she was safe or, at the very least, safe for a good portion of the movie. I suspected Billy pretty early on, only for the movie to go out of its way to clear his name to make me feel like a liar.

Only for me to be proven right! After I told myself that I was wrong!

The concept of there being two killers never occurred to me and I, for the life of me, did not expect one of them to be frickin’ Stu. I also didn’t expect to see a total breakdown of their plan, one so detailed that they both decided to stab each other to make it look like they’d been attacked. That being said, what I enjoyed the most about Scream was watching Sidney rise above both of them in some truly satisfying ways. Her taking the time to toy with them over the phone before jumping out of the closet in the Ghost Face mask was a moment that elicited a “yeah girl!” from me.

Definitely my favorite of the bunch and one I rewatch at least once a year.

Of course, a sequel was inevitable, but Scream 2 ended up being a great follow-up to the first movie. Turning the events of Scream into an in-verse book/movie franchise (Stab) felt true to real life, and we got to watch Sidney deal with that unwanted level of celebrity. Of course, this meant that Gale got another punch to the face, and her relationship with Dewey was on the rocks (not the first time that will happen).

The second movie also introduced a concept that I liked seeing in Scream throughout the years – how the killer(s) operate with the advancement of technology. We got caller ID and were so self-aware that Joel, Gale’s Black cameraman, had the sense to LEAVE THE MOVIE because Black folks rarely (if ever) survived in horror movies (also, Gale’s last cameraman was murdered). The deaths this time felt more brutal and shocking (I didn’t expect Randy to die) and you wondered if Sidney was right to suspect her new boyfriend or if she was just being paranoid.

The twist on who the killer was an unexpected surprise (at least the main killer, Mickey was kinda expected). A delightfully pissed-off mom returning to avenge her son was a quaint idea, especially taking into account the failed Mrs. Voorhees phone trivia from the original Scream.

A more than worthy entry into the franchise, though we know these things never end with just two movies.

Instead of going into Scream 3, I’m skipping to Scream 4, or SCRE4M, or Scre-four-um as I like to sound out the “4” in the middle.

What I like about this movie is seeing what’s happened with the original cast, and even Woodsboro itself, after all these years. I liked seeing Sidney, Gale, and Dewey interact with the newcomers in an, “I’ve been through this before,” sort of way. It’s a new generation of horror coming together with the old generation to face a familiar threat, which I thought created an interesting dynamic.

I also liked struggling writer Gale trying to figure out what to do next in her career. What do you tackle when you’ve already tackled Woodsboro? What do you tackle when that story now has so many sequels that the high school kids can have an entire “Stab-a-thon” on the anniversary? On the flip side, Sidney has become a best-selling author, finally telling her story, which makes Gale feel some kind of way.

I really like the twist of the killer being someone in Sidney’s family and the plot thread of growing up in Woodsboro and being known as Sidney Prescott’s cousin. Jill was also completely ruthless, killing her partner to perfectly craft her sole survivor narrative. Still, as Sidney says to her dear cousin, you don’t f*ck with the original.

A surprisingly fun fourth entry to the series even if I hated to see Hayden Panettiere go out like that.

My least favorite (but still not a bad time): Scream 3

I always waffle between thinking the Hollywood setting is too much and finding it a touch bit charming as we watch the actors of the movie within a movie deal with the murders.

First of all, I will forever love the Carrie Fisher cameo in this movie, so Scream 3 will always have that going for it. There are also a lot of fun moments that happen that could only work in a Scream film (Gale Weathers, the person, working with Gale Weathers, the actress, who takes her role absurdly seriously).

I also like Sidney just being done with peopling as a whole. I feel like that’s a mood we can all relate to.

All that said, I… really don’t like the killer in this movie. I don’t like Roman being the one who mentored Billy Loomis and was fine with Billy (and Stu) coming up with the idea on their own. I also feel some kind of way about Roman understanding the abuse his mother suffered (an extremely relevant topic in Hollywood)… then defaulting to murder when she couldn’t handle seeing him after so many years. He can be upset about it… but convincing your half-sister’s boyfriend to murder your mother AND your half-sister?

It all just felt so convoluted, even if trilogies do be like that (as Randy explains because of course he left a videotape behind, oh, and he has a sister). While I like the family killer in SCRE4M I don’t really think it was necessary in this one.

While this is probably the film that, for me, felt a bit to meta, I still watch it whenever I get in the mood to watch all the Scream films. It’s just the one I don’t like as much as the others.

What is your ranking order on the Scream films, more importantly, how do you think the fifth installment will fair compared to the other movies? According to critics, it’s actually a pretty good time! I predict that it might land above SCRE4M for me but under Scream 2?

I might be biased because I adore this grizzled “I’ve seen some shit” Dewey in the upcoming Scream.