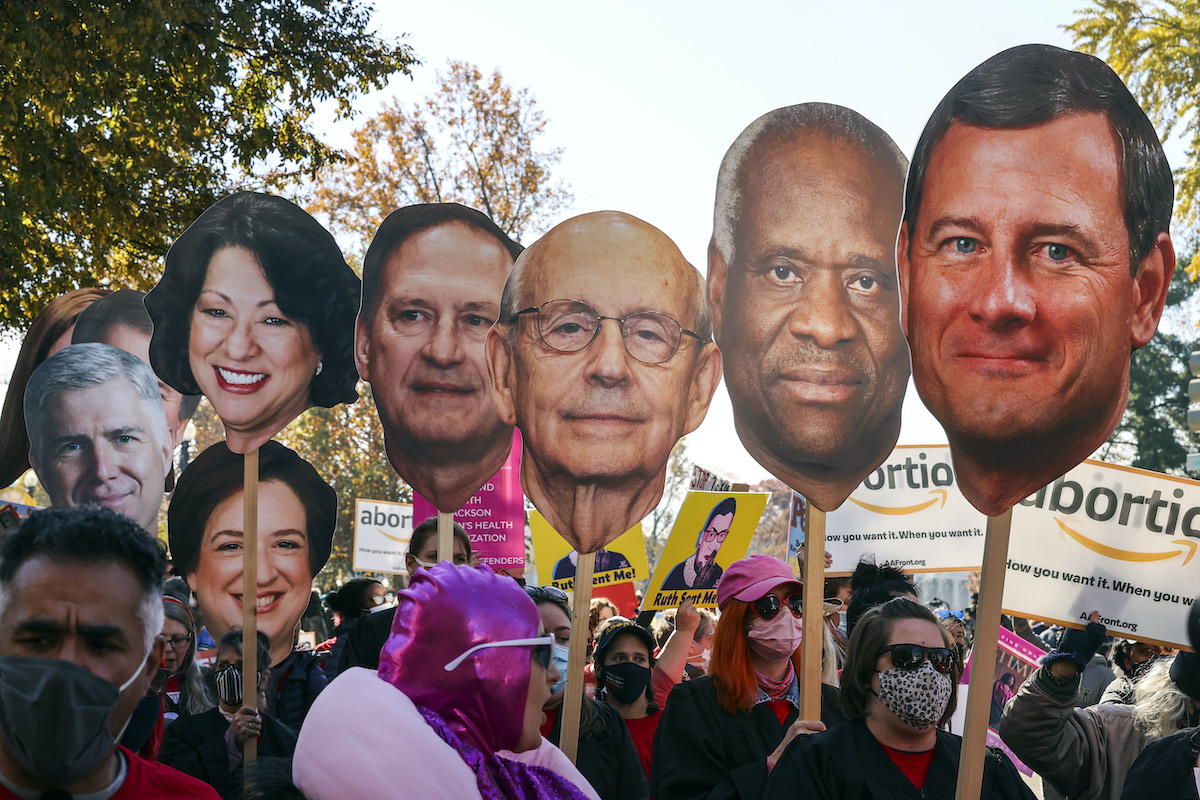 The Supreme Court heard oral arguments Wednesday in the case of Dobbs v. Jackson Women’s Health Organization, and things did not go well.

Dobbs v. Jackson involves a blatantly unconstitutional law out of Mississippi that bans nearly all abortions after 15 weeks gestation. Since Roe v. Wade specifically established a constitutional right to abortions before the point of fetal viability (about 24 to 28 weeks), there really wasn’t any reason for the court to even hear this case unless they were considering overturning that established precedent—which is exactly what they seemed to be doing.

A lot happened during the two hours of tense discussions, and if you want a full recap, the New York Times has a good timeline here, and Rewire’s live-tweet thread can be found here, and continued here.

Otherwise, here are some of the day’s highlights, by which I really mean lowlights, because again, this was a bad day.

The problem (or one of many) is that if the “arbitrary” marker is eliminated, there will be nothing to keep states from implementing their own standards. In Mississippi, it will be 15 weeks (for now), but that’s clearly just a stepping stone to fully banning abortion outright. Also, if Roe is overturned, dozens of states already have trigger bans on the books that will immediately go into effect banning abortion to different degrees, many of them entirely.

Brett Kavanaugh said that when it comes to abortion, “you have to pick” between the “interest” of the pregnant person and the fetus, and that it’s not possible to “accommodate” both.

“When you have those two interests at stake and both are important… why should this court be the arbiter rather than Congress, the state legislatures, state supreme courts, the people being able to resolve this?” Kavanaugh asked. “And there’ll be different answers in Mississippi, in New York, different answers in Alabama than California, because there are two different interests at stake, and the people in those states might value those interests somewhat differently. Why is that not the right answer?”

It’s specifically because different states and different people might “value those interests” differently that this needed to be implemented on a constitutional level to begin with!

There were many horrifying statements during the SCOTUS hearing. But the low point for me was Justice Kavanaugh’s statement that this case is hard because ‘we can’t accommodate the interests of both the woman and the fetus’: it was clear who he was prioritizing and it isn’t women

Both Samuel Alito and Kavanaugh invoked Plessy v. Ferguson (which established the idea of “separate but equal” being just fine) as an example of a Supreme Court needing to overturn a harmful, wrong precedent.

That means they are putting a person’s right to abortion on the same level as a person’s “right” to institutional racism.

Amy Coney Barrett had a hell of a day.

Barrett suggested that abortion is unnecessary because adoption is always an option. She repeatedly brought up “safe haven” laws, which allow for parents to safely and legally give up an infant immediately after birth.

As the Times writes, “Her point seems to be that banning abortion would not necessarily doom women to also raise unwanted children, in terms of the impact on their lives.”

Where to even start with that one? Maybe with the idea that forced birth is immoral, inhumane, and straight-up violence against a pregnant or potentially pregnant person. Or with the fact that it’s not just parenthood but the physical and emotional toll of pregnancy itself that can impact a person’s life? Or how about the fact that the American healthcare system is beyond broken and forcing a person to be pregnant and to give birth is an incredible financial burden?

Also, the idea that all abortions are traumatic is completely false, but forcing a person to remain pregnant to term, give birth, and then give up an infant sounds infinitely more likely to have a severe emotional impact.

Barrett suggesting abortion isn’t necessary because women can just gestate and birth a child and then give it up—a horrific trauma in itself, regardless of the physical demands and dangers of pregnancy and birth.

All signs seemed to point to the mega-conservative court overturning Roe and Planned Parenthood v. Casey. About midway through the arguments, Justice Sonia Sotomayor asked an important question: “Will this institution survive the stench that this creates in the public perception, that the Constitution and its reading are just political acts?”

I just can’t move off of Justice Sotomayor’s question: “how will this Court survive the stench?…” It was a shocking moment. An unadorned recognition of the legitimacy issues that are clearly preoccupying a number of the justices.

As for what comes next, the New York Times explains:

The justices will cast tentative votes at a private conference in the coming days. The senior justice in the majority will then assign the majority opinion to a colleague or, just as likely, keep it. Draft opinions, almost certainly including concurrences and dissents, will be prepared and exchanged.

On average, it takes the court about three months after an argument to issue a decision. But the decision in the abortion case is not expected until late June or early July, when major rulings tend to arrive whether they were argued relatively early in the court’s term, as this one was, or in the court’s final argument session, in April.