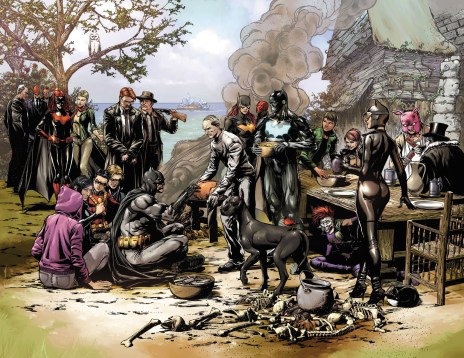 For years, Scott Snyder has been gathering fans in both the superhero and horror genres. Via DC’s Vertigo line, he’s created the sci-fi horror series The Wake, which brings up old terrors from Earth’s oceans, and the American Vampire saga that features how the New World mutates familiar monsters. Along with this, he’s been hailed for his work on Swamp Thing, Batman and Superman Unchained. Currently in the pages of Batman, he’s redefining the early days and Bruce Wayne’s war on crime in the story Zero Year. Along with this, he’s gearing up to join other creators for the new series Batman Eternal, which will feature new challenges for Gotham City and its heroes in the present day. At Emerald City Comicon, Scott was kind enough to chat about his current and upcoming work on Batman.

The Mary Sue: Scott, you seem to refuse fitting into any category. You jump from The Wake and American Vampire to writing stories of Superman and Batman and then back again. Is there a conscious effort not to be typecast?

Scott Snyder: There’s a conscious effort by me to challenge myself. Raphael [Albuquerque] and I had always discussed taking a break from American Vampire. So we were at that point and decided to do it and so then, before The Wake started, I only had to write Batman and Superman Unchained. And I thought, it’s good, I have room to just do these stories for a bit. And I got so depressed after just a month or two. I mean, I’ve always had a problem with depression, but I couldn’t understand why  because I love both these stories and these heroes. But not having a place I could go that was my own and that made me push myself a different way, with a different set of priorities to make me exercise different muscles as a writer, really made me unhappy.

So I think I learned a valuable lesson, that I should never, ever do that again where I only have superhero work or, hopefully, where I only have creator owned work. That balance is important to me. I work on a superhero thing that has restrictions and expectations and a tremendous amount of pressure, but also the goodwill sentiment that comes with it, and at the same time building something else from scratch that you have to sell to people with no familiarity with it. I can’t do only one thing, it makes me feel unhappy. I need that variety.

TMS: Even when you’re working with the same characters, you go into very different atmospheres for your story arc. Your early Batman story The Black Mirror is a suspenseful thriller, while Court of Owls is all about conspiracies and doubting things you take for granted. And right now, Zero Year is a new version of Batman’s origin that feels like a high action blockbuster.

Snyder: The Black Mirror was me trying very hard to do a straight detective noir. Dick Grayson was Batman and the city was coming to get him in this punishingly dark way. Court of Owls though, I thought let’s create a threat that’s really shaking the city, that’s operatic and huge. But then Death of the Family is very intimate. Now with Zero Year and redefining Batman’s early days in Gotham, we’re going the other way. I’m not using narration, I’m not using the same sort of cause-and-effect storytelling. I’m intercutting, making it symbolic and cacophonous and odd, and I’m trying to make everything colorful and bright. A lot of stuff doesn’t happen at night. Things are exaggerated and almost cartoonishly fun. I try very hard to make each project something that challenges me, otherwise you’d see through it pretty fast.

TMS: I’ve really enjoyed how different Zero Year is from Frank Miller and David Mazuchelli‘s Batman: Year One, rather than retreading old ground. Some stories have tried so hard to be like Year One, and to avoid any possible comparison with Silver Age and Adam West campiness, that I think they overcompensate and take away the fun stuff, like acknowledging that Batman wears a cape, works in a cave, adorably personalizes his gear, and fights people with costumes and powers. Zero Year‘s atmosphere definitely feels like it embraces comic book elements more. It’s a world where it wouldn’t be weird or surprising to see Bruce later run into Superman and Wonder Woman.

Snyder: Right, and this is an inversion of Year One, which was great and important for so many reasons. As a kid, I live in New York and reading Year One I thought, this looks like my city, this looks real. But to do that exact thing now and make Batman grim in the same way, where a lot of it a corollary to urban decay, I don’t think that works for as many people now. Urban decay exists, but I think now people are more afraid of climate change, terrorism, and of economies running on fumes. All of these things are represented and exaggerated by the villains. Nothing can live up to Year One anyway, so we’re just going to be so different you can’t compare them. But at heart, both are about making Batman personal and contemporary. 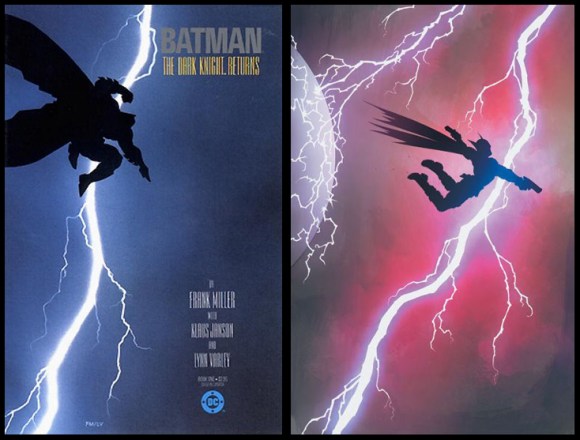 TMS: Speaking of Frank Miller, a recent chapter of Zero Year had a scene where Batman leaps from a zeppelin while lightning strikes behind him. It’s a nod to the famous image from The Dark Knight Returns and there are other nods made to classic Batman images and covers, but I understand that this one in particular had to be redrawn.

Snyder: Yeah, originally Greg [Capullo] drew a perfect replica of the silhouette from The Dark Knight Returns. But my feeling was we needed a much more desperate, energetic pose than that confident pose. It didn’t fit our younger Batman to make the image look exactly like what came before.

TMS: That also makes sense with the rest of the story, where the homages are never exactly like the original images. The scene that duplicates the cover of Detective Comics #27 doesn’t have two guys in fedoras looking up at Batman, it’s now two members of the Red Hood Gang. The Frank Miller image has him looks like a missile, but in Zero Year I think it’s clear he’s making a last-ditch effort and just praying it works.

Snyder: Exactly. It’s not that old man who has confidence and knows what he’s doing and who’s leaping directly at bad guys. He’s younger and hungrier, he’s straining, he doesn’t know that he’s going to make it. Greg and I went back and forth. Sometimes I defer to him, sometimes he defers to me. As much as I know that he loves that old image, I think we did the right thing. An homage is great but we want to make something that’s our own version of those moments and I wanted this one to be an inverse of the earlier one. The pose is different, the age is different. The original is blue, ours is red. That’s the fun, reinterpreting things that are iconic and making them your own.

TMS: Switching gears, what are we going to see in Batman Eternal that is different from what happens in Bruce’s other titles? 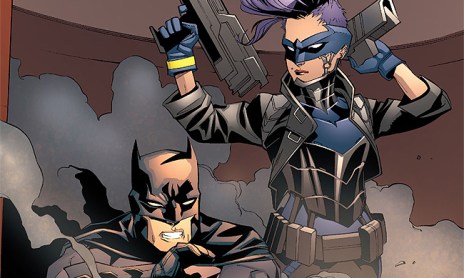 Snyder: Batman Eternal explores Gotham in a way that you normally wouldn’t see in a monthly series. It’s an experiential book. The other writers and I show you what it’s like to live in Gotham, to be a cop in Gotham, to be the night watchman at Arkham, to be a guy who wrote a book on the Joker. You’ll experience what it’s like to be Bluebird, who’s newer to this than other characters. It’s intimate but there’s also this very over-the-top, vaulted story that gets bigger and bigger. The first issue, you’ll see something happen that changes the power structure. The fifth issue brings a villain back I don’t think you’ll expect. It’s going to burn Gotham down in a lot of ways.

TMS: Sounds like a lot of fun to look forward to.

Snyder: Thanks. Before you go, I’d also like to say to everyone at The Mary Sue, you’ve all been very supportive and awesome. So thank you to everyone there and everyone who reads The Mary Sue.