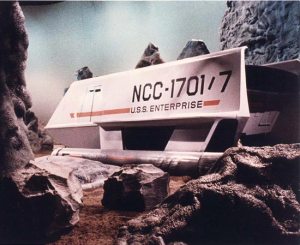 In these hard economic times, it’s good to know that some people out there are still storing enough money under their mattress for a sound investment or a little indulgence. In this case, someone had an extra $70,000 laying around so they could engage in a bidding war for an actual, gigantic prop from the set of Star Trek: The Original Series. But the Galileo NCC-1701/7 wasn’t the only piece of pop culture memorabilia up for auction. See what else had people bidding, like Gene Wilder‘s original Willy Wonka costume and more Star Trek stuff.

The Galileo shuttlecraft, which is 24 feet long and nine feet tall, was sold to an unnamed bidder who ended up paying $70,150, beating out other interested parties with money to burn in a bidding war that ended the auction. Although, another account says that it was sold to Alec Peters and Adam Schneider of Galileo Restoration for $60,000, plus the buyer’s premium, which probably brought it up to the higher amount. Either way, that hunk of vintage sci-fi junk cost more than my car.

But this weekend’s auction in Los Angeles wasn’t the end of this collector’s dream! More items, part of the Dreier Collection, will be part of an ongoing call for bids throughout the month of July. Items include the aforementioned Willy Wonka costume worn by Wilder, a Chewbacca mask from Star Wars, production props from Alien 3, and various items from the Indiana Jones movies, Battlestar Galactica, the original Superman movie, and more. 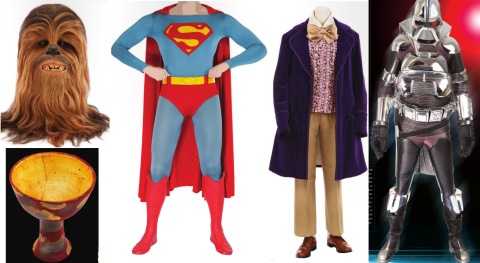 Probably some of the more attractive items are set pieces from Star Trek, namely The Next Generation. There are over forty lots worth of items, including the Captain’s Chair (sat in by Jean-Luc Picard himself, Patrick Stewart) and one of Geordi’s VISORs. Of course, you will still need several thousand dollars for things like that. (Only a few hundred for a Cardassian PADD.)

So, what are you waiting for? You’ve been swing your allowance all this time, right? Break open that piggy bank and go for it!