We talk to one of the genre's rising female directors about her latest horror comedy. 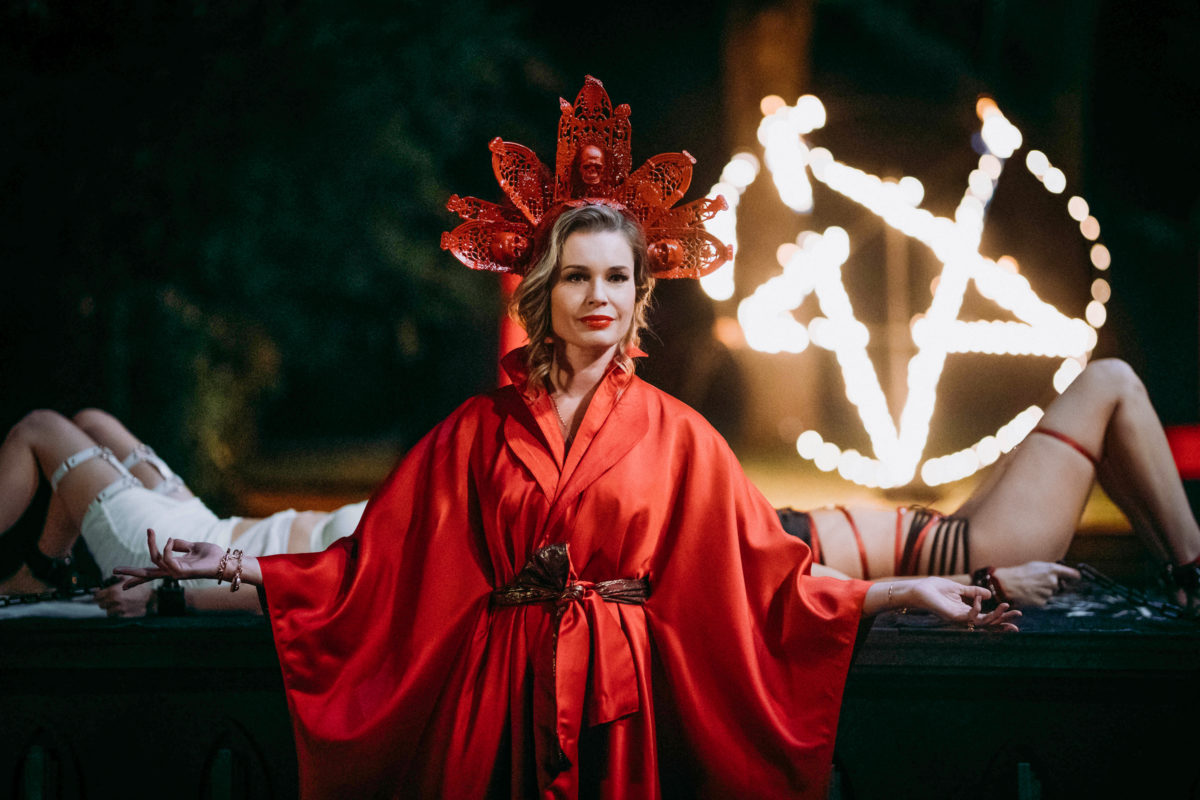 It’s a tale as old as time: Sam (Hayley Griffith), a young pizza delivery girl is just trying to make her rounds when she unwittingly makes a delivery to a suburban coven of Satan worshippers. Her night is derailed as she tries to avoid becoming the coven’s virgin sacrifice and escape their charismatic leader Danica Ross (Rebecca Romijn). This new horror comedy from Fangoria is the latest work from Chelsea Stardust (All That We Destroy), who is quickly making a name for herself in the world of indie horror.

We sat down with for a meeting of the Chelseas to discuss Satanic Panic, Satanist Martha Stewart, and the gooey gross joys of practical effects.

The Mary Sue: What I really liked about the film, and I think we’re seeing this theme in a lot of horror films right now, is the rich vs. poor dynamic and wealth inequality. We’re seeing it in Ready or Not, The Purge films, was that something that attracted you to the project?

Chelsea Stardust: Absolutely, I love the commentary on class-ism that this script (written by Ted Geoghegan
and Grady Hendrix) was making, that was one of the big things that attracted me to it, and that it was this upper class world of Satanists that’s completely run by women, all the men take a backseat and the women own this world, and I absolutely loved that. And when we were doing production design/costumes/hair and make-up, everyone kept saying “what would Martha Stewart do?”, like if Martha Stewart was a Satanist, how would she decorate her house, how would she design this altar? We just kept going back to “what would Martha do?”

TMS: Rebecca Romijn, who plays their leader Danica Ross, is so good in this film, and I loved that she was like, the Tony Robbins of Satan, with that self help vibe. Was that how you envisioned the character from the start?

CS: Rebecca is so f-cking fierce in this movie, I really hope I see people cosplaying Danica Ross! When we were talking casting, and Rebecca’s name came up … I’d seen her in sci-fi and the X-Men films of course, and I had a Skype session with her and she told me she loved Fangoria, loved horror movies, and she really loved the role. We talked about the character and she was like, “let’s do this, I’m all in”. She had never really done gore before, so I got to all those things with her and it was such a blast. She just brings this incredible power to the role, which I loved. She just brought this great comedy to it as well. She was just such a blast to work with, and totally owns the part.

CS: Everything I’ve done has had practical effects funny enough. First off, Fangoria prides itself on practical effects, because they lean into the old school horror which I love. What’s great about practical effects is that it’s real. We’re still working on VFX, and we can tell what’s real and not real. I think in a few years we’ll be there, where we can truly trick the eye, but I think practical effects give the actors something to really interact with, that’s not just a blob of green! It helps elevate and heighten the performance, just to have something to act with and act against, and I think that’s really important in the horror genre.

And also, we’re making these crazy looking things … we were really looking at Evil Dead and Poltergeist, studying those shots, and there’s a lot of technical aspects to keep in mind when shooting with practical effects. It’s time consuming, but absolutely worth it, because when it really works, it’s f-cking awesome!

TMS: What are some of your favorite horror films and directors that you’ve been inspired by?

CS: Oh my goodness, so many! I love John Carpenter. One of the biggest influences for Satanic Panic was Karyn Kusama’s Jennifer’s Body, also Sam Raimi’s Drag Me to Hell, Evil Dead of course. Deathgasm, and Ti West’s House of the Devil, I definitely think that and Satanic Panic are two sides of the same coin.

I also really love Kathryn Bigelow. She’s maybe my favorite director, Near Dark is one of my favorite horror movies. And I love Mary Harron, American Psycho is another huge influence and inspiration. In terms of weirder horror, I love Frank Henenlotter’s Brain Damage … and of course I was raised on Texas Chainsaw Massacre, Night of the Living Dead, and those classic Universal monster movies. But I love the genre so so much.

TMS: Speaking of the genre, Satanic Panic is such a different film tonally and visually from All That We Destroy. You’ve done moody sci-fi horror, now horror comedy, what other subgenres do you want to explore?

TMS: Horror is a notorious boy’s club, what advice would you have for female filmmakers looking to break into the industry?

CS: Don’t put up with any bullshit! I try to practice kindness, as Patton Oswalt says, “it’s chaos, be kind”. I think I’ve achieved a lot more with kindness than with any sort of anger. But speak up, speak your mind, let people know what you’re thinking and feeling. And pick your battles: know what you really want to fight for, and know what you can accept. And just don’t give up. Always keep trying. This industry is so brutal, you have to want it with everything in your body and your being. Never stop, and don’t let anyone else stop you either.

Satanic Panic hits theaters, on demand and digital on September 6, 2019.