And different types of comedy in general. 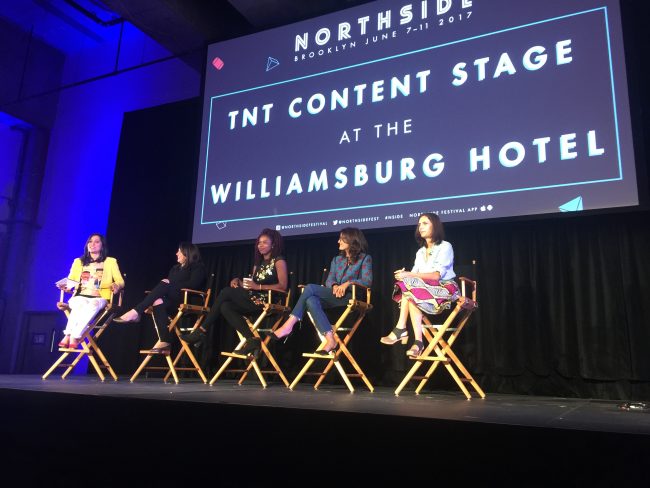 Last week, I spent time at the Northside Festival in Brooklyn, where I attended events like a panel titled “Transforming the Content Supply” with Sasheer Zamata, Raeshem Nijhon, Grace Edwards, Sarah Aubrey and Paola Mendoza at the TNT Content Stage. The panel focused on representation and diversity in media from the side of both creators and higher-ups.

I was especially struck by Zamata’s points, which focused on the benefits and importance of diverse comedy. There’s a kind of rhetoric, especially in comedy, that argues that a push for representation equals an attempt to censor, eliminate, or attack white male comics. In reality, it’s giving people more options for what they choose to watch and giving diverse comics more of a voice, something the former SNL member emphasized.

The panel began with each woman sharing an anecdote that stood out for them in regards to representation, and Zamata talked about the comedy scene when she was in university:

“This is probably a lower-stakes thing, but in college there was only one improv team when I was starting, and it was a bunch of white dudes—which is fine, they’re funny. But it was just one note and I didn’t think that was ok—like that was the only comedy we could absorb at the time. And also I didn’t make the team, so I was like, alright! [laughs] I’ll start my own group.

“I started my own group with one of my close friends, who’s still doing comedy and I felt like we just had a wildly different voice because we had more women, we had more people of color and the group still exists at the school—and it opened up another opportunity for more people to create and do stuff. Out of that group came a sketch group, and then out of that came a political humor column, and it begat more things.”

When moderator Nijhon pointed out that Zamata starting her own group is an example of how the burden is often on the under-represented to create their own, the comedian agreed and acknowledged how important it is to see examples of yourself in the field you’re going into.

“I’m very excited to see new opportunities grow because I was able to say ‘Well, we need more. We just need more ways to get humor out and be able to touch other people,’ because I get bored watching the same thing over and over again and imagine other people do too.

And at the college level it’s like, because I was doing it then I felt like, ‘Oh, I can do anything,’ that propelled the rest of the stuff I do in my career and now. So I would hope that that kept happening for other people too. I think it is important at every level to be able to see an opportunity to create and get your voice out there and to be able to do it.”

When asked to speak more about her time on SNL, Zamata recalled how certain biases would show that became even more clear when Leslie Jones also joined the cast:

“There was a lot of different views on blackness just from people watching the show, and also people creating the content of the show too. I got hired and Leslie Jones got hired shortly after and sometimes people would come to my face and say things like ‘I like the way you perform vs. Leslie’ or ‘Leslie would probably do this better than you.’

“We’re both very different performers, different taste, and different delivery. But that’s fine. [laughs] That’s a good thing! We created variety and some people in their mind have an idea of what they want to see out of a black woman and get confused when they see more options. It’s interesting—it’s interesting what roles we got in the process of it. I mean, all we can do is do what we do.

“It’s like, we would never be cast in the same thing—as the same character, but people are still like ‘Well, this is what I think a black woman is, so if you’re a different thing from what I’m used to I don’t wanna see you.'”

Fortunately, Zamata never let these comments deter her or dictate how she acted, though it was something she noted. “People really have an issue with two different types when we had so many white men,” she said. “It’s ok if you just like this,” the comedian points out, emphasizing that it’s perfectly fine to prefer one type of comedy over another, or even only one kind of humor. “But at least there’s choice. There’s options you can choose from.”