@SarcasticRover Is Teaching Us All about Martian Santa Today on Twitter

Have a very spacey Christmas, everyone. 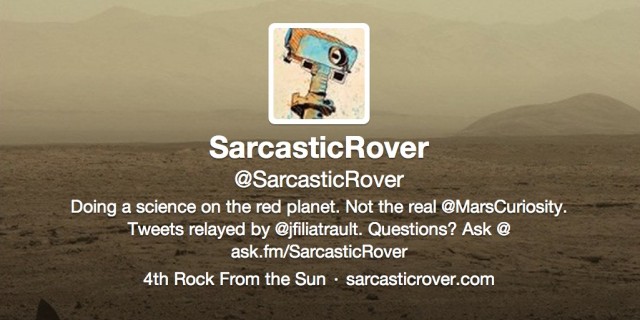 The @SarcasticRover twitter account really is one of our favorites. It’s a perfect blend of comedy and science, and today it’s throwing Christmas into the mix and teaching Earthlings about Martian Santa in a string of tweets. How does he get around? What does he like to eat? Is he like your dad? Find out in these Tweets.

Earth Santa lives at the North Pole, but what about Martian Santa?

Martian Santa lives in a giant red sand-castle on top of Olympus Mons. His wife is named Betty and she has a doctorate in physics.

Martian Santa will get you a different present than you asked for. He has a bad memory and never writes stuff down. Just like your father. — SarcasticRover (@SarcasticRover) December 16, 2013

Think about a gigantic new rover.

Martian Santa can bring you gigantic toys because of the lower gravity on Mars. He can, but he doesn’t.

Bow ties are cool. Even on Mars.

Martian Santa wears a thermal space-suit to combat the freezing cold of Mars. He also wears a bow-tie because he likes to look fancy. — SarcasticRover (@SarcasticRover) December 16, 2013

You got what you want, Martian Santa! Now give these people air!

Martian Santa knows you want to go outside, but the outside will kill you – so instead just play with this toy and have a Merry Christmas.

These are just a few of our favorites. @SarcasticRover was at this for hours. They put together the full list as a Storify page, but you should really be following @SarcasticRover on Twitter so you get to experience this kind of thing firsthand in the future.