That's not how words work. 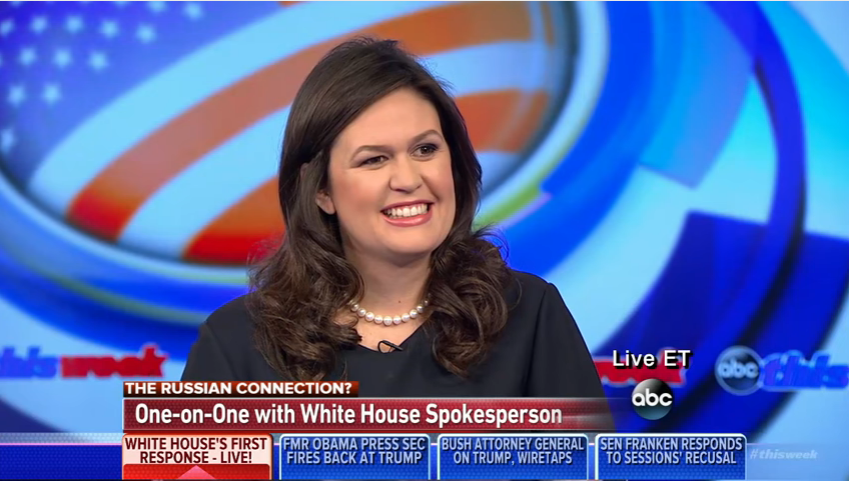 Between Kellyanne Conway, Sean Spicer, and Trump himself (just for a start), you would think that the White House was full up in the word vomit department. Apparently that’s not the case. Trump’s principal deputy press secretary Sarah Huckabee Sanders (as in daughter to Trump’s former opponent and racist garbage monster Mike Huckabee) did the TV news circuit this weekend and the result is a vortex of nonsense.

First, she stopped by ABC News to talk about Trump’s tweet storm, in which he proclaimed Barack Obama had wiretapped Trump Tower during the election campaign.

Terrible! Just found out that Obama had my “wires tapped” in Trump Tower just before the victory. Nothing found. This is McCarthyism!

ABC’s Martha Raddatz asked Huckabee Sanders where Trump got that information, because every outlet that had written about it had made it clear any reports were unconfirmed. None of them made the kind of definitive declaration Trump himself did. So how is he able to say this wiretapping definitely, for sure happened? According to Huckabee Sanders,

All we’re saying is, let’s take a closer look. Let’s look into this. If this happened, if this is accurate, this is the biggest overreach and the biggest scandal.

And Raddatz had to interrupt her to point out “You keep saying if, if, if.”

.@MarthaRaddatz to WH spokesperson on Trump’s unsubstantiated wiretap claim: “You keep saying if, if, if” Watch: https://t.co/gUk1yR45tB pic.twitter.com/ueKc76CkH9

Yeah, Raddatz asked how Trump knows this happened, and the response was well if it happened, it’s bad. And that’s not an answer. It’s pure deflection.

In this weekend’s Last Week Tonight, John Oliver included that exchange in his rundown of what he has dubbed “Stupid Watergate.”

Let’s break that down: she thinks the president saw information that led him to believe that this is a real potential.

So I guess this is just how things are going to work now. The president once saw a banana with a bruise that looked like a picture in an article he read in a dream, and that is why we’re at fucking war!”

This morning, on Good Morning America, George Stephanopoulos also had to interrupt Huckabee Sanders that she can’t just puts words in front of each other in whatever form she sees fit without regard for, you know, facts.

In addition to not addressing the difference between an illegal wiretap (for which there’s no evidence) and a court-approved wiretap (which has been speculated), there’s the issue of sources. Specifically, that Huckabee Sanders continuously cites sources that do not back up Trump’s claim.

For those readers of legal age, Stephanopoulos interrupting Huckabee Sanders to say “That is simply not true” is a new addition to the White House Surrogate Drinking Game I’m making up right now.

Oh, and just in case you thought we hadn’t hit rock bottom of quotes from White House representatives who don’t understand their jobs, that first interview also included this actual exchange from Huckabee Sanders when

Sarah Huckabee Sanders: “I’ll let the President speak for himself.

Martha Raddatz: “But you’re his spokesperson!?”