No Woman Owes You Her Story of Sexual Harassment, Not Even Sarah Huckabee Sanders 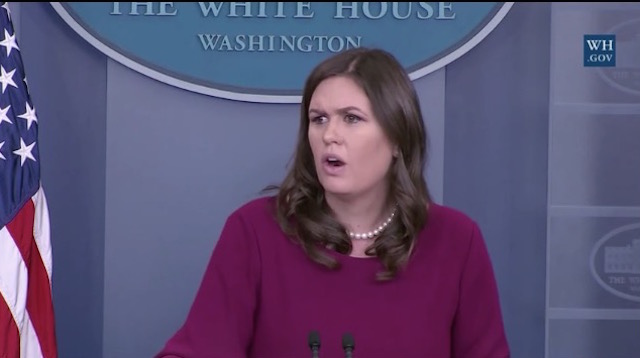 Sarah Huckabee Sanders held her usual daily press briefing yesterday just a few hours after three women publicly shared their stories of being sexually harassed by Donald Trump. Naturally, reporters were going to ask about their press conference. I’m sure they didn’t expect Sanders to give any sort of straightforward or honest response (that would be a fun change), but she is the spokesperson for Trump’s White House, so of course she should be asked for a statement.

However, here’s how Brian Karem, the White House correspondent for Playboy, asked for that statement:

“As a woman standing up there talking to us,” he said, “I know your job is to relate what the president says, have you ever been sexually harassed and do you understand — and I’m not saying by the president — I’m saying ever. And secondly, do you have any empathy for those who come forward? Because it’s very difficult.”

Look, Sarah Huckabee Sanders has said some horrendous things about women. She’s said that the women accusing Trump of sexual misconduct are liars. She smirked her way through a defense of Trump, saying the difference between him and Al Franken was that Franken “admitted wrongdoing and the president hasn’t.” She called on ESPN to fire Jemele Hill. She maintained that Trump’s derisive use of “Pocahontas” as a nickname for Elizabeth Warren isn’t a racial slur. And while it’s not specifically just about women, she also said that “many historians” believe a “failure to compromise was a cause of the Civil War.” It’s hard to find something that will make me feel empathy for Sarah Huckabee Sanders. But that question from Karem did it.

The number of women who have been sharing their stories of sexual trauma is incredible. When women share their stories, it can not only be empowering for themselves, but it has the power to make other women feel less alone in their experiences. Most women have experienced some form of sexual harassment or abuse at some point in their lives, and we shouldn’t have to stay silent about that.

But plenty of women have chosen not to share their stories, and there are myriad reasons for that. It can be traumatic to relive those experiences, or maybe they fear retaliation, or maybe they just don’t want to open up to strangers. Whatever the reason, it’s their choice.

It is completely inappropriate to ask a woman–any woman–if she’s ever been harassed. Especially in public. Especially by a man who is not engaging in any sort of empathetic reciprocal sharing, but instead demanding the story as if he’s journalistically entitled to it. No woman owes anyone her #MeToo moment, not even Sarah Huckabee Sanders.

By the way, Sanders’ response is maybe the only thing she’s ever said from that podium that really knocks it out of the park.

I absolutely would say that I have an empathy for any individual who has been sexually harassed, and that certainly would be the policy of the White House. I’m not here to speak about my personal experience on that front, but I’m here to relay information on behalf of the president.

(via The Hill, image: screencap)