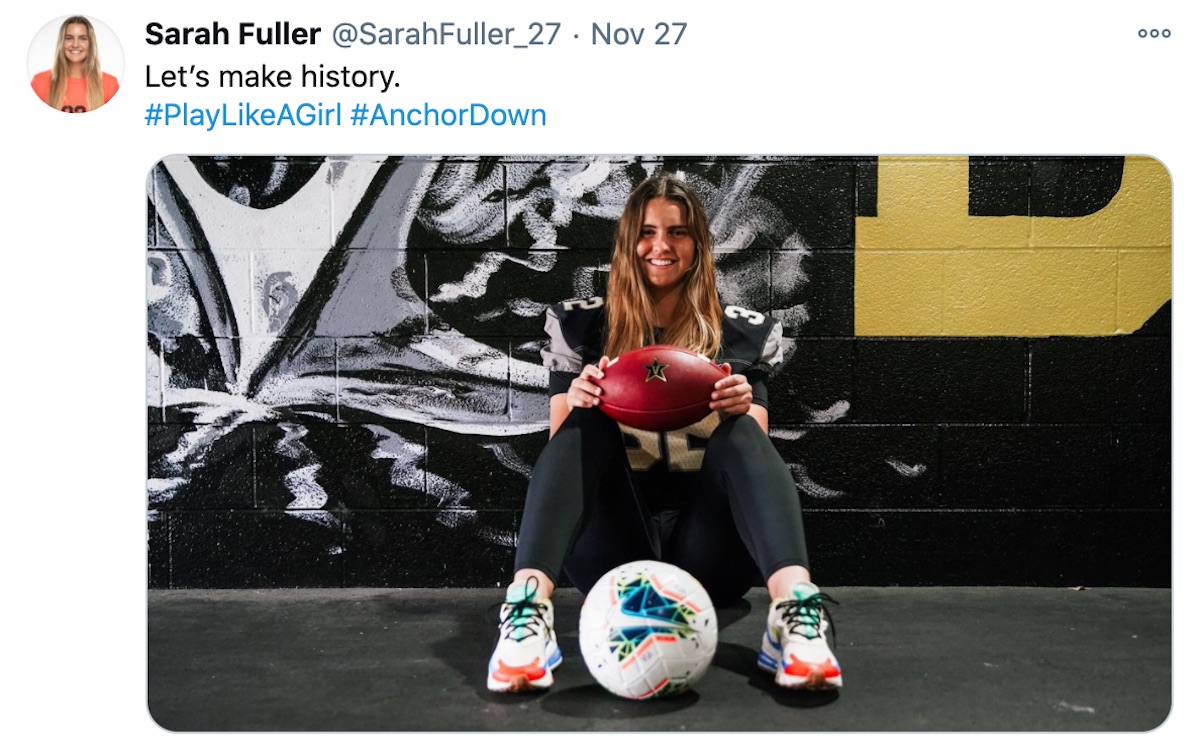 Vanderbilt’s Sarah Fuller has made history as the first woman to play in a Power 5 football game, kicking off for Vanderbilt against Missouri.

I freely admit to knowing very little about football, and if you’re in my football-less boat, here’s what “Power 5” refers to, per Wikipedia: “In college football, the term Power Five conferences refers to five athletic conferences whose members are part of the Football Bowl Subdivision (FBS) of NCAA Division I, the highest level of collegiate football in the United States.” I also freely admit to wishing that the sport of football be abandoned and left as a relic of the past, but if we must have football, I’m here to celebrate Fuller’s barrier-breaking and history-making moment.

History is made by the bold.

Thank you for inspiring us all, Sarah Fuller.#PlayLikeAGirl | #AnchorDown pic.twitter.com/4oKsfLhYHb

NPR writes that the decision to add Fuller to Vanderbilt’s roster as a kicker came earlier in the week, reportedly “after several team specialists entered quarantines related to COVID-19.” Fuller was already well-known in Vanderbilt sports, serving as a goalkeeper of the women’s soccer team.

Fuller’s historic kickoff in the third quarter of Saturday’s game sent the ball 30 yards to the opposing team’s 35-yard line. Missouri did not return the kick. Despite Fuller making college football history, Vanderbilt was crushed by Missouri, losing the game 0-41.

Fuller is just the third woman to play in the NCAA Division I Football Bowl Subdivision, after Katie Hnida of New Mexico and April Goss of Kent State, according to ESPN. Liz Heaston was the first woman to play — and score — in a college football game, kicking two extra points that helped lead Willamette University to victory against Linfield College on Oct. 18, 1997.

Also, she was great:

Sarah Fuller squibbed it exactly where she was supposed to (watch Vanderbilt’s coverage guys all funneling short right) and left it un-returnable for Mizzou. Probably one of Vandy’s best executed plays of the day in all honestly pic.twitter.com/7cEY8j9rnN

My own personal feelings about football notwithstanding, this is an important day in sports history. Fuller’s accomplishment will mean a lot to many people watching, and the impact of her out on that field will resound.

Here’s why the Sarah Fuller story is awesome, whether she plays today or not. My teenage daughter came downstairs just now and immediately said, “Let’s check in on the Vanderbilt game.” pic.twitter.com/kh1QarFbH9

Congrats Sarah on being the first in P5 history. Thank you for being someone my little girl can look up to. This UK family is rooting you on. #trailblazer pic.twitter.com/nNKYbwne0G

Good Morning to those that smash barriers. Today, Sarah Fuller becomes the first woman to play in a Power 5 college football game when she lines up at kicker for the Vanderbilt Commodores. I don’t normally watch Vandy games, but yeah, Imma catch this one. pic.twitter.com/pmDRMxUxli

Good luck to @VanderbiltU’s Sarah Fuller, goalkeeper for the women’s soccer team, who is dressing for their football team as its place-kicker.

If she plays, she will be the 1st woman to do so in Power 5 football.

Women belong in the game! https://t.co/XouFpvMRgd

Sports figures all over were rooting for Sarah Fuller on her historic day 🙌 pic.twitter.com/KXCQujBFGe