Sandra Fluke Responds to Being Called “Slut” by Rush Limbaugh, Gets Call From President Obama 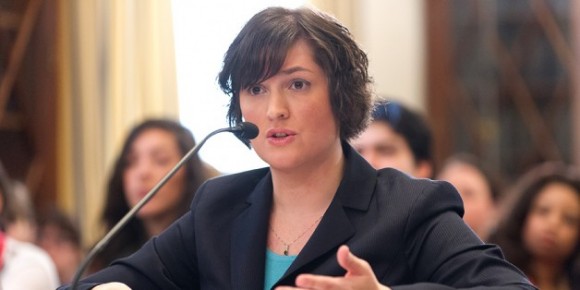 The day after hilarious radio personality Rush Limbaugh called Georgetown law student Sandra Fluke a “slut” and “prostitute” who should make videos of herself having sex if she wants her insurance to cover birth control pills (to show pay society back for supporting her healthcare, you see), Fluke has issued a response, she received a phone call from the President, and sponsors have started dropping their ads from Limbaugh’s show. Sorry guys, we couldn’t let this one go. But let’s look at the support Fluke has been receiving since this infuriating thing happened. (Don’t worry, there is lots of support.)

I guess my reaction is the reaction a lot of women have when they’ve been called these names. Initially you’re stunned but then, very quickly, you’re outraged because this is, historically, the kind of language that is used to silence women, especially women who stand up and say that these are their reproductive health care needs and this is what they need. And what’s been amazing to me today is the outpouring of support. Everyone from members of Congress to Georgetown faculty to so many women who’ve contacted me, and I think it’s clear from what they’ve said that they’re not going to be silenced by this.

Limbaugh’s statements were also dismissed as “inappropriate” by Republican House Speaker John Boehner‘s office, “as is trying to raise money off the situation.” It’s not really clear whether by “the situation” the Speaker meant “having sex,” “calling a woman a slut for wanting to require insurers to cover birth control” or this.

However, unequivocal support came from an even higher office — that of the President of the United States. President Obama placed a call directly to Fluke, right before she appeared on MSNBC’s Andrea Mitchell Reports, thanking her for “speaking out” and that her “parents should be proud.” To boot, Georgetown’s administration also called their student “a model of civil discourse.”

Clearly, Limbaugh will give less than a crap about this. In fact, just today, he dug himself even deeper by saying that Fluke “should back off how much sex she’s having” and that no, her parents should not be proud of her.

But surely, this will hit him where it hurts: Rush Limbaugh is losing advertisers. Two have officially dropped their commercials (Sleep Number and Sleep Train), and others are “looking into” the issue after receiving a lot of feedback.

Limbaugh unlikely to learn from this, if he hasn’t by now. But the best we can hope for is that he loses monetary support. We have a first amendment that lets us say whatever we want — but companies can also pick and choose where they want to put their money.