Motorized Shoes Are Real, Not Just Pulling Your Leg 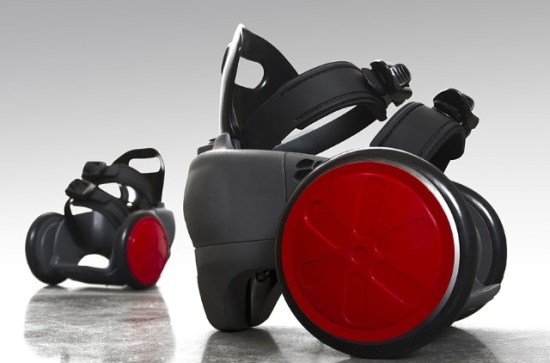 If you ever wanted your own pair of remote control, motorized shoes, you don’t have to wait any longer. spnKiX (pronounced “spin kicks”) have just launched at CES and are exactly what they appear to be. These puppies boast speeds up to 10 mph and can support a wide variety of feet, men’s sizes 6-14 and women’s 7-15.5. Ironically enough, it might seem, spnKiX are NOT recommended for anyone over 180 pounds, so they’re no substitute for your trusty Rascal. That being said, they might be a step towards the future I think we all want.

Now, as you might expect, spnKiX have their drawbacks, one of which is price. For a limited time, you can preorder a pair for $375, but after that, they’ll jump up to a hefty $649. Nothing to sneeze at. Their battery power might also be an issue. Currently, they run on a rechargable lithium-ion battery. It’ll provide enough power to keep you going for 2 to 3 miles, but that’s it. After that they need to charge, which can take around 3 hours. Of course, if you were to just mount them on rollerblades where traditional leg-power could be converted into charge for the battery which would then be used for small, controlled boosts of speed while you’re running from the cops, you might have a solution on your hands, er, feet rather.

All that being said, there’s certainly a demand for the things. A recent Kickstarter campaign aimed to raise $25,000 and wound up making $70,000.  Although everything is set and in the works, you can’t actually get your hands on a pair until the first shipment goes out, which is expected to be March of this year. In the meantime, you’ll have to satisfy yourself with Heelys.

Awesome shoes you could wear spnKiX with