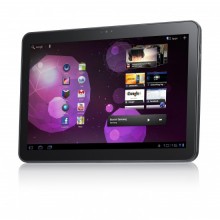 Whether you worship Apple or think its products are woefully overrated, you’ve got to acknowledge the benefit it brings to consumers simply by forcing its rivals to compete. Following the launch of the iPad 2, Samsung has been brave enough to admit publicly that the iPad 2 is making it rethink its strategy with the Galaxy Tab 10.1: Not only is Samsung impressed with and challenged by the upticked thinness of Apple’s latest, but it is considering making its own 10-inch tablet cheaper.

Samsung exec Lee Don-Joo told Korea’s Yonhap news agency that it had been planning to make the Galaxy Tab 10.1 even more expensive than the already-pricey 7-inch Galaxy Tab, but that it would “have to think that over” following Wednesday’s announcement from Apple. Don-Joo also said that “We will have to improve the parts that are inadequate”; it’s not clear if something was lost in translation here, but he is likely referring to improving future Galaxy Tab models rather than scrapping the current line.