The iPad 2 Details You Need to Know

This afternoon, Steve Jobs popped in from his medical leave to officially announce the iPad 2. (The first revelation about the new device: “iPad 2” isn’t a placeholder name, but is actually what it will be called.) Given all the leaks, speculation, and coy hints from Apple itself, we would have been shocked if we didn’t get an iPad 2 today: However, some of the details came as a surprise.

The biggest question going into today was just how big a refresh to the iPad we’d be getting: Since John Gruber hypothesized that Apple would surprise everyone with an iPad 3 in September or so, many have speculated that the iPad 2’s relation to the iPad would be akin to the iPhone 3GS’ relationship to the iPhone 3. But while a few hoped-for features are missing from the iPad 2 — most notably Retina Display — this is a substantial overhaul. Jobs, for his part, said that “we think 2011 is clearly the year of iPad 2.”

The key details below:

Pricing and availability: No price cut: The iPad 2 will start at $499. It will be available starting on March 11th from both AT&T and Verizon. Where previous Apple launches have provoked early morning stampedes, the iPad 2 will be available at Apple Stores starting at 5pm, which is good news for most interested buyers but will prolong the wait for the diehards who camp out overnight. Also available for online order.

Oh, and it comes in black and white from day one. This. Changes. Everything. 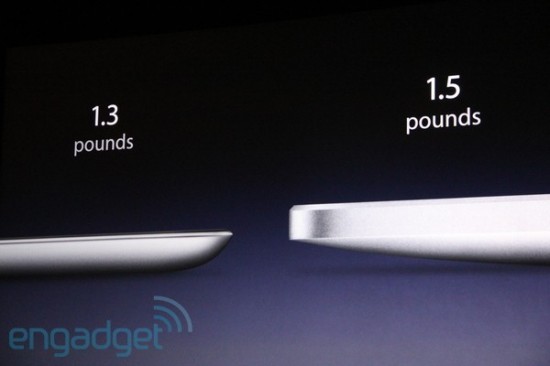 As expected, the iPad 2 will be getting a brand new “1GHz dual-core Apple A5 custom-designed, high-performance, low-power system-on-a-chip.” Apple says the CPU is twice as fast and the graphics are up to 9x faster.

Also as expected, the iPad 2 also gets its front camera, allowing for FaceTime, while keeping a rear camera. Specs:

Back camera: Video recording, HD (720p) up to 30 frames per second with audio; still camera with 5x digital zoom

Tap to control exposure for video or stills

No Flash on those cameras though. LOL.

A fancy case: The Smart Cover

Though iPhone and iPad cases have both been booming cottage industries, Apple seems intent on making sure it has the must-buy case this time around. When you open its smart cover, it wakes the iPad; it’s auto-aligned with the iPad by magnets, which are attracted to magnets within the iPad, and it even cleans the iPad while it sleeps. Ridiculous. And it comes in lots of colors. Unfortunately, the price is a little ridiculous to match: $39 for polyurethane, $69 for leather. 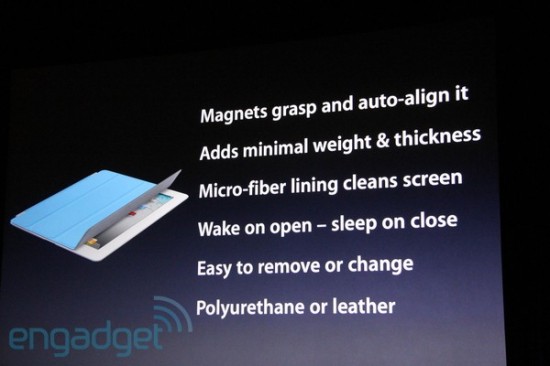 When the iPad 2 rolls out to stores on March 11th, it — as well as the original iPad, GSM iPhones, and third- and fourth-gen iPod Touches — will be able to download iOS 4.3. The tweak isn’t that much — Geekosystem reader Apo Apostolov rather witheringly wrote on Twitter that “The iOS 4.3 improvements are less compelling than a minor Android upgrade” — but it allows iTunes home sharing over WiFi, lets iOS devices stream content through Apple TV, supposedly speeds up Safari performance with the Nitro JavaScript engine, and, most importantly of all, brings back preference control for the iPad switch, allowing users to choose whether it mutes the device or sets rotation lock. Apple admitting a mistake!?

Now that the iPad has a front-facing camera, users can do what iPhone users have been able to do for a while now and videochat using FaceTime, which is a big enough deal that Apple highlights it as one of the key new features on their site. Via Engadget: “Next is FaceTime. It’s the best and easiest way to video conference. We’re bringing it to the iPad. You can FaceTime between two iPads, between an iPad and an iPhone, or between an iPad and a Mac.”

Battery life is still 10 hours. Mention of memory was curiously absent from both the presentation and even Apple’s “technical specs” page, which leads us to believe that it’s still 256MB and will not move up to the 512MB that was widely rumored before today. No Thunderbolt: Retains 30-pin dock connector port.

Having not yet gotten hands on with the iPad 2, we can’t pass final judgment: However, based on what we’ve seen today, this is a real upgrade to the original iPad. The Oatmeal’s comic on what it’s like to be an Apple owner is cruelly apt today for iPad 1 owners. (Though contrary to the comic, if you got an iPad for Christmas, don’t run and throw it out: No need to be a stereotypical Apple consumer!) If the success of the iPad is any indication, the iPad 2 will draw yet more customers into the fold — which is good news for Apple, because as competitors like the Motorola Xoom, BlackBerry’s PlayBook, and others appear on the scene to challenge Apple’s overwhelming tablet dominance, it can’t afford to rest on its laurels.