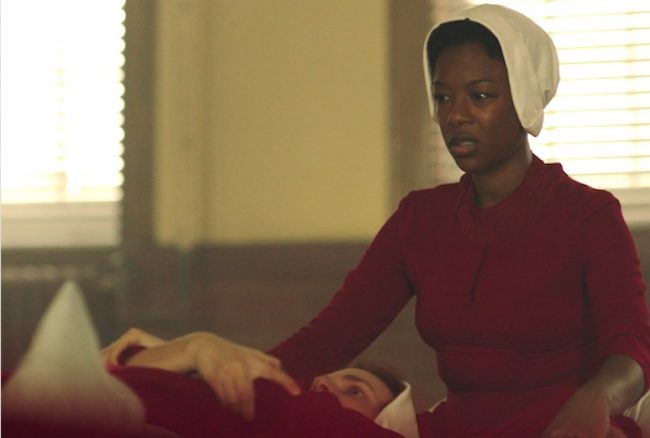 One of the most intriguing characters on Hulu’s The Handmaid’s Tale (aside from Elizabeth Moss’ June, of course) is June’s best friend Moira, played beautifully by Samira Wiley, who initially stole our hearts as Poussey on Orange Is the New Black. In a recent interview, she discussed why she loves Moira (as created for the show) so much, and what she thinks of the show’s handling of race.

In an interview with Deadline Hollywood, Wiley addresses the handling of race on the show, saying that she appreciates that the focus was squarely on all women, and that all races, ethnicities, and socioeconomic backgrounds were affected equally by the increased sexism of Gilead.

“Margaret Atwood is a consulting producer on the project,” Wiley begins. “[A]nd even in having conversations with her, we were finding that in this retelling of the story, what is paramount for the world of Gilead is children, and that is paramount above and beyond anything else, so whoever can be a handmaid, it is so important for us to have you that everything else goes away.

Also, just in talking to Bruce, we want our show to be able to reflect the time that we’re living in right now. We want to be able to make comments on race sometimes, but not have our show be racist, in terms of not having African American people and people of color involved. I think it’s a great choice, and it’s obviously a very conscious choice. It’s not one made haphazardly.”

She then adds, “Also, selfishly, I’m just so happy they made that decision because now I get to play a great role.”

Wiley also talked about how emotional it was for her to play a lesbian in the world of Gilead, which hit very close to home. “I remember having to call my wife at the end of days and talk through it,” she reveals. “[A]nd remember that we aren’t there. We’re in a different place, and we still can be vigilant about the things that are happening around us, but it wasn’t easy having to step into that world every time I was on set.”

Definitely check out the rest of the interview over at Deadline. Wiley, Moira, and the show as a whole are definitely reminders of the work that needs doing. “We aren’t there” yet, but we also don’t want to get anywhere close.