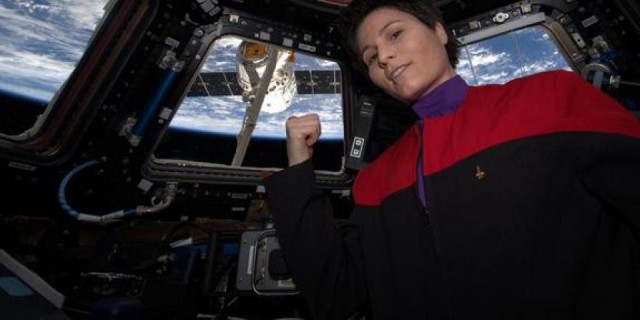 Sometimes, it pays to wear your favorite Starfleet uniform when taking selfies in outer space. We’ve known for a while that Italian astronaut, Samantha Cristoforetti, who’s currently aboard the International Space Station, is a huge nerd. So much that, on one occasion, she did her best Janeway impression in the above photo. Well, it looks like all that in-uniform camera prep paid off!

Cristoforetti is going to be appearing in an upcoming Star Trek fan film called Star Trek: Axanar, which recently had a successful crowdfunding campaign on IndieGoGo. According to Space.com, Axanar:

[F]ollows the story of Garth of Izar, a character who was introduced in the Star Trek: The Original Series episode “Whom Gods Destroy.” Garth’s story takes place about 21 years before the events of the first Star Trek episode, “Where No Man Has Gone Before.”

We don’t yet know what Cristoforetti’s role is, but she’ll be joining fellow astronaut, Dr. Mae Jemison, as one of the only two real-life astronauts to appear in the Star Trek universe. Pretty damn awesome.

Will you be watching Star Trek: Axanar?