Those fish better pitch in for gas. 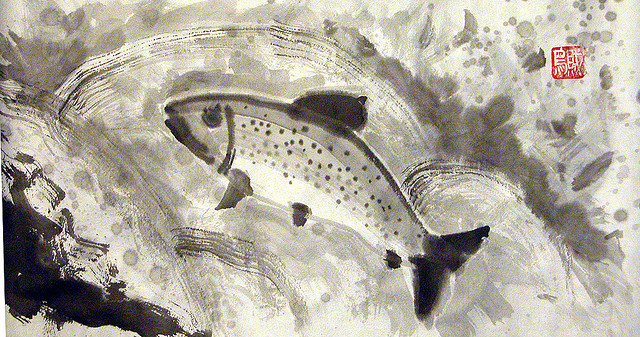 This should convince you that the natural world is in balance (not): if California’s drought doesn’t end soon, bizarre measures will be taken to ensure that hatchery-raised salmon survive their migration. Last Monday, California cemented plans to transport juvenile fish to the Pacific Ocean via tanker truck.

The weird arrangement should be a huge relief for California’s multimillion dollar fishing industry. This year’s unseasonably warm and shallow waters have made food sources scarce and salmon extremely vulnerable to predators. Bob Clarke, fisheries program supervisor at the US Fish and Wildlife Service says, “The conditions may be so poor as to produce unacceptable levels of mortality for the out-migrating juveniles.”

To ensure that some salmon will live to spawn, wildlife and federal officials are planning to transport over 12 million fish from hatcheries on the Sacramento, Feather, American, and Mokelumne rivers via truck. It will take about three hours for the six-inch long adolescents to be driven from their hatcheries to the Pacific.

It may sound dystopic to replace an incredible natural phenomenon with tanker trucks, but John McManus, Executive Director of the Golden Gate Fishing Association, says  “What this means is we’ll likely have a much better salmon fishing season in 2016, when these fish reach adulthood, than we would have otherwise gotten.”

The weird journey also has precedent. Similar methods were used during the drought of ’91-92, and hatcheries have been experimenting with trucking in recent years, although not without issues.

One problem is that highway salmon are unable to “imprint” on their home river enough to know where to spawn, sometimes causing them to spawn in the wrong river and compromise the specific genetic trait of that species. Truck-carted salmon also experience severe shock after being released into the ocean, making them more vulnerable to predators.

Regardless of the risks to trucker salmon, California may not have an alternative. Clarke promises that if water levels rise, the salmon will migrate the old fashioned way. “We don’t want to truck them down if conditions aren’t going to be as bad as we think they’re going to be.”

Everyone bust out your rain dance. Clearly California needs this drought to end more urgently than we thought.

(via The Sacramento Bee, image via Charles Burns)