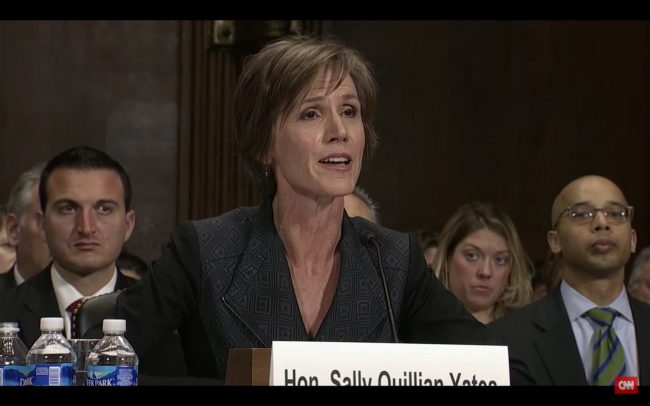 Representative Jackie Speier announced on Twitter today that she was nominating former acting Attorney General Sally Yates for the President Kennedy Profile in Courage Award, in recognition of Yates’ actions in defense of refugees and immigrants targeted by Trump’s Muslim Ban.

Specifically, she ordered the Department of Justice to not defend Trump’s order, effectively eliminating any strength or timber that the government could wield in enforcement of the ban. Yates acted in defiance of a presidential order, and did what she believed to be right. Predictably, the Trump administration was not happy with her actions, and they fired her on the Monday following the signing of the executive order.

Yates was acting as Attorney General because Trump’s appointee, Senator Jeff Sessions, is still going through the process of being confirmed for the position. Yates, who was appointed to the position of Attorney General by President Obama, stayed on after President Obama left office. Now, though, she’s been replaced with Dana J. Boente, an attorney from the Eastern District of Virginia, who immediate rescinded Yates’ order to not defend the EO.

The Profile in Courage award is given to people—usually elected officials—who “by acting in accord with their conscience, risked their careers or lives by pursuing a larger vision of the national, state or local interest in opposition to popular opinion or pressure from constituents or other local interests.”

One previous recipient is Governor Dannel Malloy, who, days after the Paris attacks in fall of 2015, announced that the state of Connecticut would continue to welcome Syrian refugees. He made the announcement at a time when many were beginning to subscribe to a hateful, xenophobic rhetoric, and when the discussion of banning refugees was reaching a fever pitch. Governor Malloy was given the award in 2016.

Judging by such criteria, it seems that Yates may be a shoe-in for the award. While the struggle to fight the immigration/Muslim Ban continues, it’s important to remember and recognize the heroes within the movement who give us the courage to keep up the fight. Yates certainly stands as one of those heroes.

(via The Daily Dot, Image via screencap)