Now that's how you end a season!

Our old friend Ikuhara shows up for one last spin in the director’s chair and makes damn sure to go out on a high note. As rough as SuperS has been at times, this is a visually stunning and thematically satisfying finale, tying up loose ends and setting the stage for potential future conflict. Say what you will about this season or its series director, but the guy knows his way around a tight narrative and striking imagery, and that’s on full display here. So let’s all go out with a bang together.

Episode 166 – SuperSweet Dreams Are Made of This

For the first time in Sailor Moon history, I had to keep pausing when I wanted to take notes because I was afraid if I glanced away I’d miss something beautiful. The animation and cinematography (coupled with pitch-perfect musical selections) were arguably the best they’ve ever been, and do far more to convey the emotions and magnitude of this conclusion than my puny point-by-point recap can. I have about as many screenshots for this one episode as I usually have for two, so you’ll forgive me if I overload on pics because MUAH, SO GOOD.

This finale relies more on image and motion than exposition, but a whole lot does happen in the first half, as the rubble clears (RIP my beloved circus) to reveal Nehelenia not only alive(?!) but carrying the unconscious Chibiusa. As the eclipse begins to clear, the circus remains lift into the air, carried back to the New Moon.

So Usagi does the only thing she can do: Uses those wicked sailor muscles to hitch a one-handed ride to the sky! 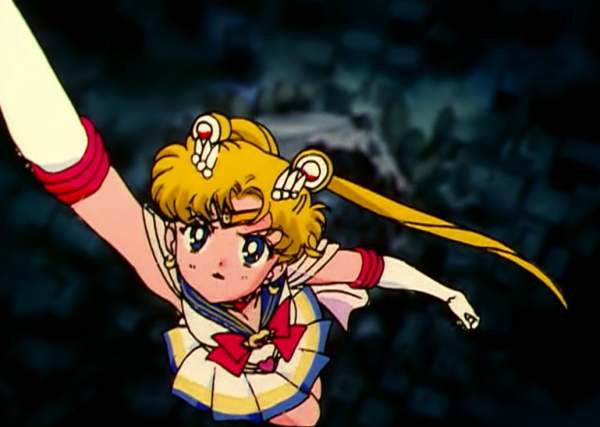 Nothing like 165 episodes of striking dramatic poses to really build the ol’ deltoids.

Pulling herself onto the structure, Usagi runs up a long spiral staircase to Nehelenia’s throne room. There, we find our Big Bad standing appalled before the shattered mirror, staring at her reflection, which reveals not a beautiful young queen but a Zirconia-like crone.

“‘Age-defying skin cream’ my ass! The next time I see that Mary Kay rep…”

Nehelenia tells Usagi the circus is being drawn back into the New Moon and her time of solitude is going to begin again, but she will NOT go gentle into that good night, not without getting a little vengeance first. Also, not before she explains her back story to the reincarnated Moon Princess. Like ya do. Flashback time!

A long time ago in a shojo palace far, far away, Queen Nehelenia ruled as a beloved queen surrounded by adoring subjects. But one day she came face-to-face with one of life’s most frightening, inescapable truths: One day, you are going to grow old and die. Horrified by the vision her mirror (in proper fairy tale fashion) showed of her as an old, ugly woman, Nehelenia became obsessed with maintaining her youth and beauty. She devoured the dreams of her subjects to maintain her youth, turning her people into Lemures and becoming the eternal queen of the dead. Like ya do? 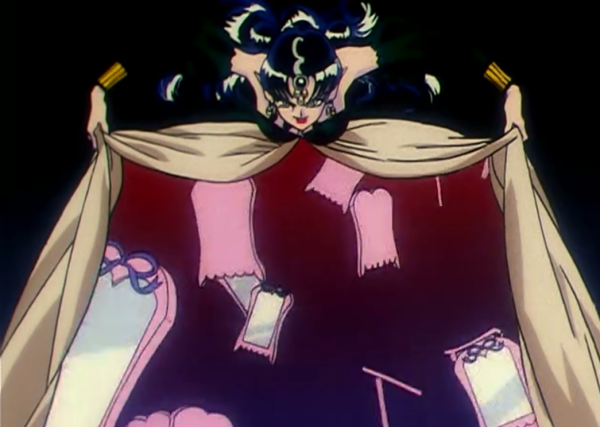 Seriously cannot even with the art in this episode.

Back in the present time line, Usagi listens to the story of the woman who’s “fine” with being alone forever if it means she can be young forever, and does exactly what I do: Pities the heck out of her. I think most people can relate to Nehelenia’s terror at her own mortality, and how tempting it would be to pursue the means needed to slow or even stop time’s inevitable march. But (as with so many of Ikuhara’s works) her “eternity” is not a dream but a nightmare, a place of selfishness and stasis and isolation. Nehelenia has chosen a familiar Hell over an unknown future, and there is something rather tragic about that.

Refusing the pity of Moon Monarchs and bloggers alike, Nehelenia takes her “revenge” by chucking Chibiusa off the side of the platform to her death?! (Dang, lady. I totally take back that thing I said about Helios and Queen Serenity treating you too harshly.) She returns to her mirror of beauty and solitude, pleased with her own petty “justice.” 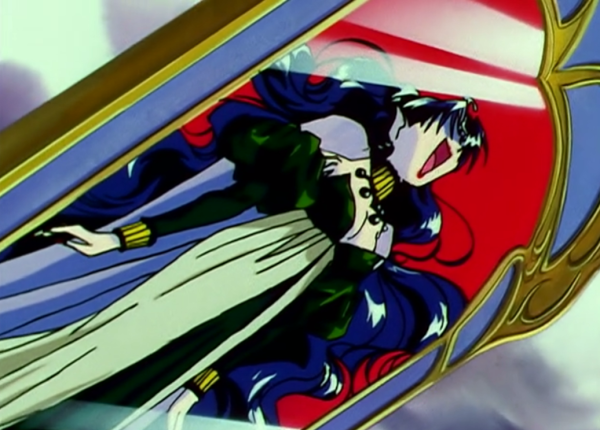 As for Usagi… well, if you said to yourself, “Boy, I sure hope SuperS’s emotional and thematic climax features a beautifully shot and dynamically animated skydiving sequence where Sailor Moon turns into Princess Serenity so she can rescue her future-daughter from certain death,” THEN HAVE I GOT GOOD NEWS FOR YOU. 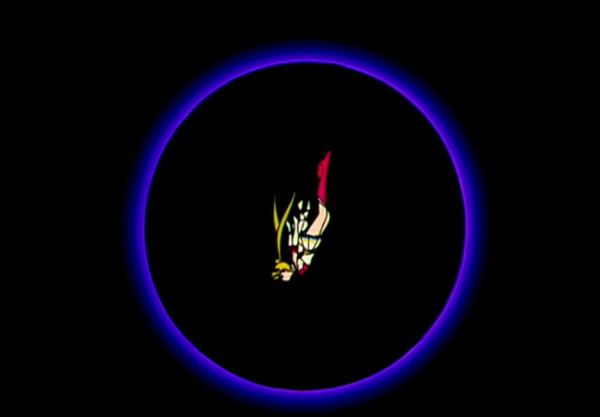 Usagi catches up to Chibiusa, but she can’t use the Golden Crystal on her own. She urges Chibs to wake up, reminding her of their dreams and pleading for them to be able to “grow up together.”

So, to summarize: Nehelenia chooses selfishness and rises up into darkness and an eternity of lonely stasis while Usagi chooses altruism and dives down into a world of light and change with the people she loves. 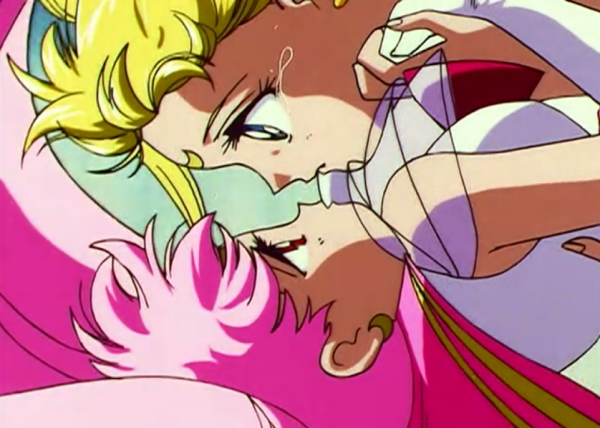 Chibiusa wakes up, of course, and they use the Golden Crystal to call on Helios to fly them gently to the earth. The episode continues to look beautiful. No one is surprised at this point.

With multiple worlds saved, it’s time for Helios and the Moonies to say their goodbyes. Now that the danger is past, he can’t remain in their world anymore and must return to Elsyion. He and Chibiusa have a cute, private farewell of their own, and… well… I know I said I didn’t have much investment in this relationship, but dammit if the rising swell of “Watashi-tachi ni Naritakute” didn’t put a little mist in my eyes after all. Sneaky music cues.

And so the scouts look on as their Alicorn friend flies home, Nehelenia returns to her prison, the Amazoness Quartet go out to find their own future (after providing a little helpful “magic” for Chibs and Helios), and the world is at peace once more.

Mr. Showrunner, I believe you had something you wanted to add?

SuperS is notoriously polarizing, and it’s easy to see why. On the one hand, it dropped its outer guardians; put greater focus on Chibiusa (who personally hasn’t bothered me since R, but first impressions die hard, I s’pose); contained a metric ton of one-off characters and plot-free episodes; used a “guest protagonist” who never really developed a proper personality; and fluctuated wildly in terms of quality character writing.

But on the other hand, it contained some of the show’s most stylized visual motifs; easily the most entertainingly designed and choreographed monster battles (which helped keep the filler fun, particularly in the early going); a greater willingness to explore our protagonists’ pettier flaws, revealing new facets to their personalities and relationships to one another; hands-down the most compelling antagonists in both Nehelenia and the Amazon Trio (whose redemption arc remains the emotional highlight of the season for me); and a thematic through-line about beauty, growth & change, and the price of “eternity” that was on par with S‘s meditation on death and rebirth.

Did it drag badly in the middle? Yes, to the point where if I was recommending this season to someone, I’d probably cut out some episodes just to help them get through the midway slump. Did it also feature some of the show’s lowest points? It sure did, and in fact Episode 136 may go down as my all-time least favorite in terms of sheer, across-the-board awfulness.

And yet, for all that, it also featured some of Sailor Moon‘s funniest moments, most memorable scenes, and ambitious story arcs. More importantly, it allowed our cast to address their fears about adulthood, stew in the nostalgia (and selfishness) of their childhood, and come out the other side ready for the next step in their lives. The shift from child to young adult is full of growing pains as we fluctuate between self-centeredness and self-awareness, immaturity and empathy. Perhaps it’s fitting that the scouts’ stories this season—and SuperS as a whole—mirrored this process, too. 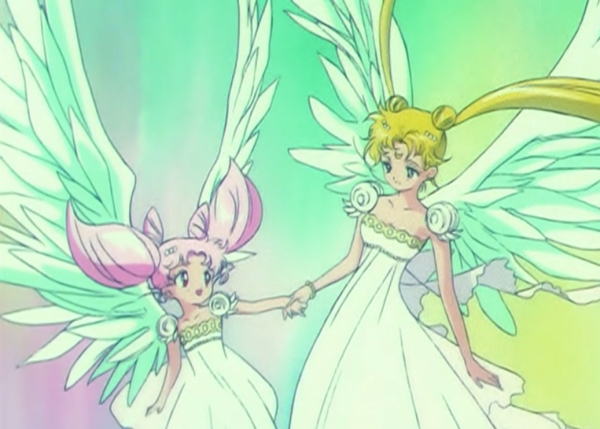 Admittedly I’m still coming down from the high of that top-notch finale, so my opinions on SuperS may lose their glow as time passes and I’m able to look over it as a complete unit rather than a pitch-perfect conclusion, but overall I leave this one feeling pleased—surprisingly so!—with the way it turned out. For all its inconsistency, I’m mighty fond of its ideas, villains, and art design, and I’m even starting to cozy up to the way it wrote the central cast, allowing them to backslide the way actual people often do in the midst of major change and growth.

SuperS may not be the best Sailor Moon season, but it’s still a season worth the watch. Despite my past frustrations, in the end, I’m bidding both it and our series director a fond farewell as we brush off the dust of one apocalypse and turn our attention to what is sure to be another. As they say, the future is written in the Stars.