When you wish upon a star seed... 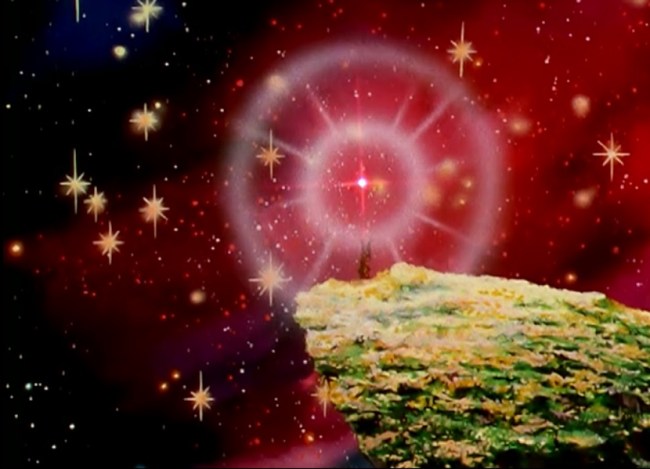 The plot is everywhere, and its devices are right there with it. My ongoing struggles with Stars continue into its penultimate episode, alas, but overall I was far more invested this week than I thought I’d be, thanks to some heart-wrenching character beats and a surprisingly layered backstory for our previously 2-D antagonist. Compelling antiheroes and sympathetic villains? Yep. Some of the magic might be missing, but it’s still Sailor Moon, all right. 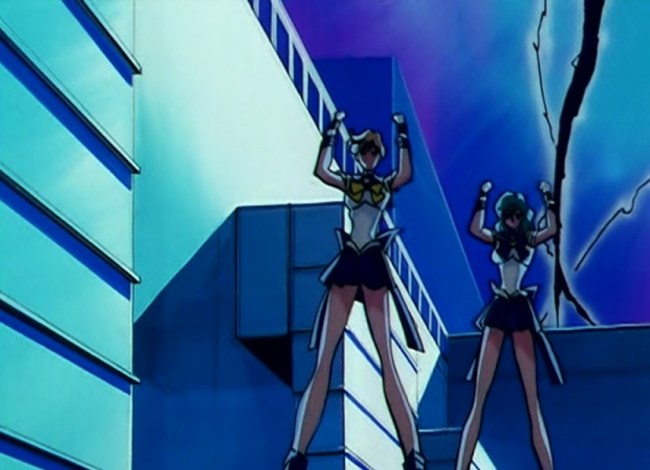 Hankies at the ready, team! This one’s gonna Deep Submerge you in feels and leave you World Shaking by the end of it.

While Usagi’s buying HaruMi’s “traitor” act about as much as I am, our deadly duo sure are getting into their roles. Haruka and Seiya throw enough energy at each other to briefly knock Usagi unconscious, during which time she has THE SADDEST DREAM about how everyone faked their own deaths as part of an elaborate scheme to defeat Galaxia–they just couldn’t tell Usagi since she can’t keep a secret. So not only does it speak to her own lack of self-worth (something she’s always struggled with), it is also THE SADDEST DREAM. 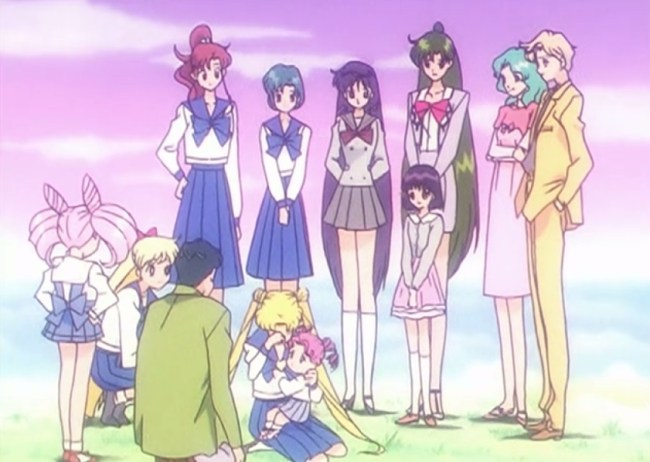 She wakes up with C.C. and Haruka, so Usagi’s all “Yo, what’s the plan?” and Haruka is all “SLAP!” And thus the fighting resumes. This elaborate ruse goes on a bit too long (given that I wrote “get on with it!” right before the halfway mark), but the relentlessness does serve two purposes: One, it wears Usagi down to the point where she actually does doubt HaruMi’s loyalty (something positively unheard-of for our trusting bunhead); and two, it fully convinces Galaxia that she’s got two bad mutha-shut-yo-mouth! minions under her command.

She orders HaruMi to take their opponents’ star seeds…to which the two respond “PSYCHE!” and turn their bracelets on Galaxia, using their power to try to steal her star seed instead! HOLY CRAP THAT IS GENIUS. I did not even consider that and it is genius. GET ‘ER, LADIES! Rip ‘er like a pickpocket! Take that star seed like she owes it to ya! OUTER GUARDIAN POWAH!

Their attack…tickles? Because Galaxia doesn’t have a star seed?! OH NO. It looks like the “PSYCHE!” is on the other foot! The very, very angry foot.

Galaxia’s impressed that they’re the first guardians she couldn’t control (“they never were very good at listening to others,” your blogger affectionately scoffs), but she’s also not a fan of insubordination. So she rips off their bracelets and leaves them to slowly die?!

In a sequence of heart-stomping dying words, Usagi apologizes for doubting them (stomp); Haruka encourages Seiya to fight to protect people instead of some abstract ideal (stomp STOMP); the two lament that not only did Saturn and Pluto die for nothing, but they’ll surely be condemned to Hell for killing their own allies (stomp STOMP STOMP); and our young, fading  couple reach out to hold hands one final time (aaaaand SQUISH).

It is brutal in its one-two punch of despair and love, and so perfectly in-character for these two fierce, loyal, morally flexible soldiers. They made a lot of mistakes along the way, but you can’t doubt their dedication to their duties, or to one another.

And then some other stuff happened but I didn’t care ’cause all my favorite characters were dead. THE END, BUH-BYE, SEE YOU FOR THE FINALE NEXT WEEK.

…Okay, fine, I guess I can finish recapping these. But I’m not gonna enjoy it. So there.

Shaken by her own doubt, Usagi actually considers giving up until Seiya reminds her of all the people who believe in her, including the Star Lights, who FINALLY accept that friend request that’s been sitting in their notifications for months. And all it took was an impending apocalypse and the deaths of almost everyone they knew! 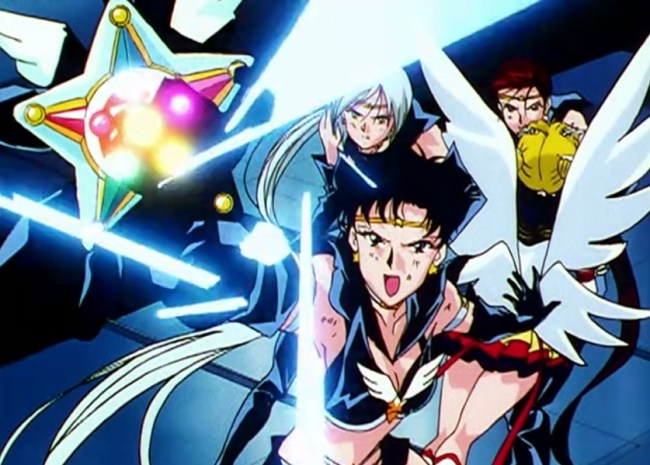 Okay, you’re right, sorry, Seiya. You sent your friend request to Usagi, so you’re exempt from my snarking.

The quartet (and C.C. or whatever) stand to face Galaxia again, but she’s got one more plot bomb to drop on us before the end credits. Because remember that story about the Legendary Sailor Guardian that Princess Kakyu told us? Yeah, she left out one important detail. Miss Legendary didn’t just seal away the chaos—she sealed it away inside herself.

Whereupon I shouted “Holy shit the Legendary Guardian is Galaxia!” and not five seconds later Galaxia announced that as well. The list of bummers just keeps on a-growin’, don’t it Usagi? 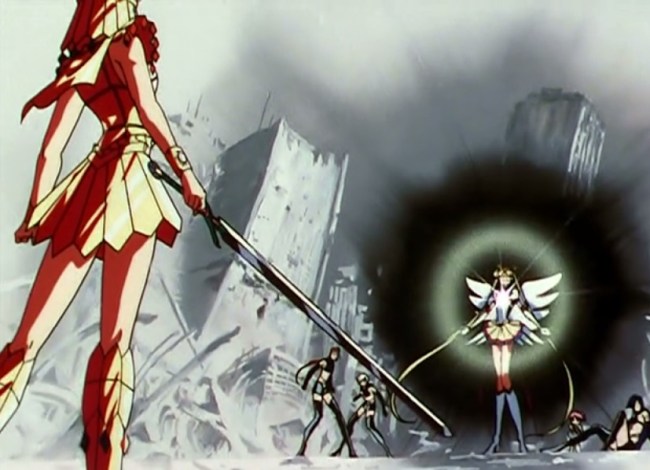 There’s a lot packed into this one, but it’s also pretty repetitive, so I’m going to play fast-and-loose with my usual “chronological recap” format this time. The whole thing is built around the present-day battle, but throughout we get sporadic flashbacks to Sailor Galaxia shortly after she sealed the Chaos: exhausted, lonely, and feeling as if she had no one to rely on. Convinced there was no one else she could trust to keep the peace (and likely infected by the Chaos she’d trapped within herself), she decided to “create a new future for the galaxy” with herself as ruler. And thus the conquest began.

Galaxia’s story is, in effect, a tragedy about the price of power—its isolating effects both socially and emotionally, and how “I’m the only person who can save everyone” can so quickly turn into “I’m the only one who matters.” It suggests that Usagi not being the strongest is actually a boon to her kingdom, and once again highlights the importance of community and teamwork.

It also makes Galaxia a damn sight more interesting. The most compelling antagonists are usually the ones who believe they’re on the side of justice (as the Black Moon Clan and Nehelenia both did to varying degrees), so the fact that she thinks this is the best way to save the galaxy adds an extra intriguing layer to her arc. I wish we’d seen flashes of this previously, as it would have made this season’s conflict a lot more compelling in the early going, but it’s solid characterization even so. 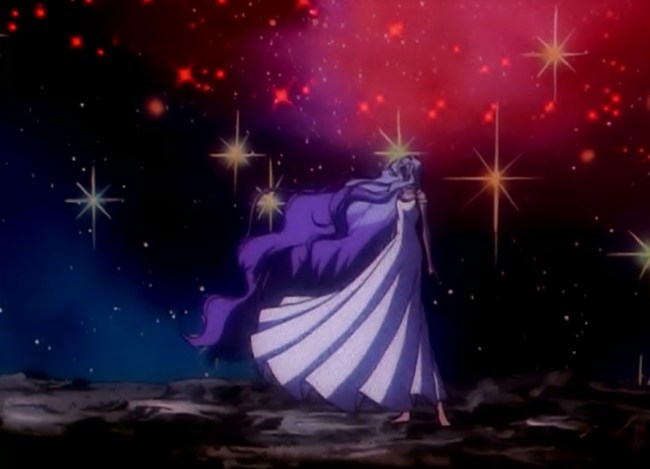 Also the red butterflies are back. But don’t worry. I’m sure they don’t foreshadow Galaxia’s connection to C.C. at all.

After learning all this, Usagi (like me) is pretty sure it’s not the Legendary Guardian who decided this, but the Chaos inside of her. She does her ample best to defeat Galaxia with Friendship!, but it’s shockingly ineffective every time she tries. Along the way, Team Seiya keep trying to go all Charge of the Star Light Brigade on Galaxia, and Usagi keeps jumping forward to protect them from that final blow.

This all happens a few times with slight variation, leading to a broken Moon Rod, a bunch of battered Lights, combo attacks that actually deal damage (OF COURSE THEY DO, I’VE BEEN TELLING THEM TO COMBINE THEIR POWERS FOR THE LAST…ah-hem, sorry), and Galaxia finally going “Eff the star seeds, I’ll just kill you punks.” 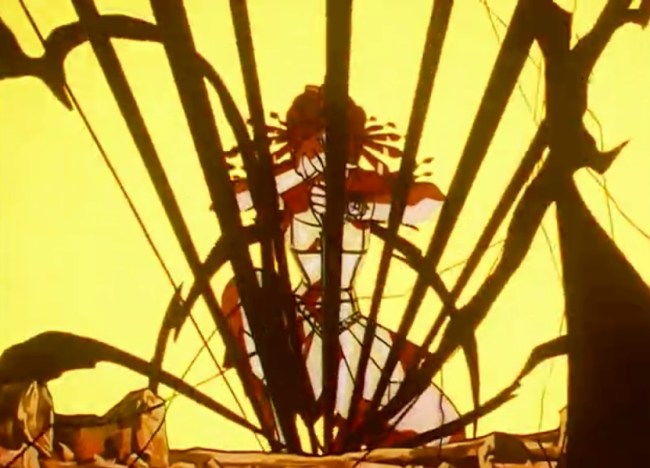 Eventually Usagi tries to release the energy from her star seed to save the day (yeah, I don’t think she had a plan here), to which Galaxia responds “Mine now!” and tries to steal her seed from her. Then we get one last flashback that isn’t entirely clear, but the important part is that Sailor Galaxia yanked out her own star seed and sent it away so that it could be nurtured in peace and one day awaken as the Light of Hope.

And where is that Light now? I’ll give you three plot devices. I mean, guesses. Yes, after standing around while her allies died (some of them crushed under the guilt of knowing they killed their fellow guardians in a last-ditch gambit to save the world that still ended in failure, NNGH), Chibi-Chibi finally gets off her ass and does something. She returns Usagi’s star seed to her, and I guess gets ready to defeat Galaxia or whatever. Because who needs battle tactics when you’ve got plot devices!