We interrupt this broadcast to bring you the apocalypse. 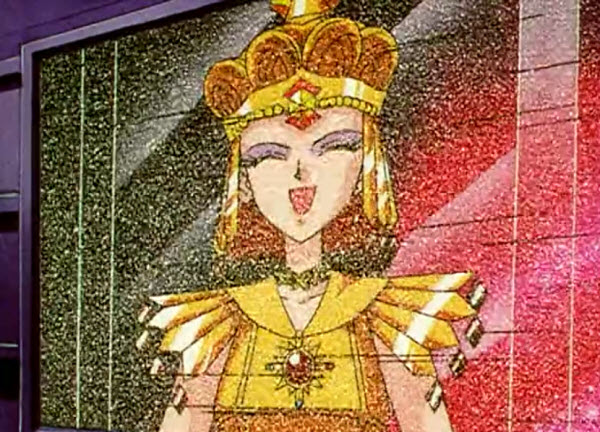 Season-long mysteries get devastating answers, our cast struggles to know who to trust, desperate times lead to desperate plans, and characters be droppin’ like flies. Geez. Did I accidentally switch over to Game of Thrones: The Animated Series at some point? 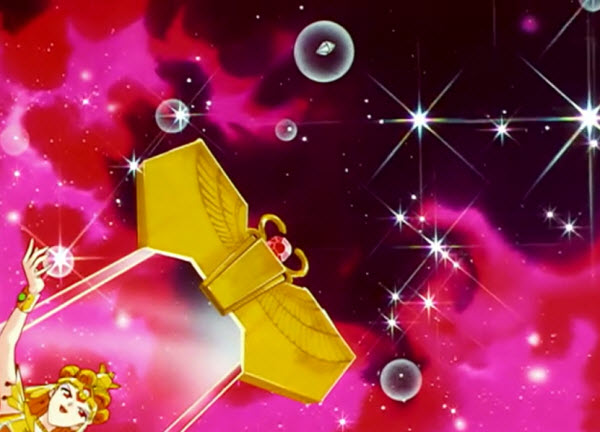 Galaxia’s TV station takeover finally makes sense as she uses it to broadcast her message of doom to the rest of the Juuban. Ami uses Awesome Science to trace the signal back to Ginga TV, and the Star Lights be all “Hey! We got nothin’ else to live for! Who’s up for a suicide mission?!”

The rest of the scouts regroup at Rei’s shrine (along with Doctor Puu and Hotaru, YAY) for a bit before…er, there’s a lot of unclear staging in this episode, but apparently HaruMi marching dramatically off didn’t make it obvious that they were going to Ginga TV too, and then Sailors Saturn and Pluto must’ve been like “Look! a distraction!” and run off, because suddenly all the Outers are off to fight the Big Bad and the Moonies are trying to figure out where they went.

But really, the only truly meaningful thing to take out of this is RETURN OF THE FLOWER PETAL ENTOURAGE. 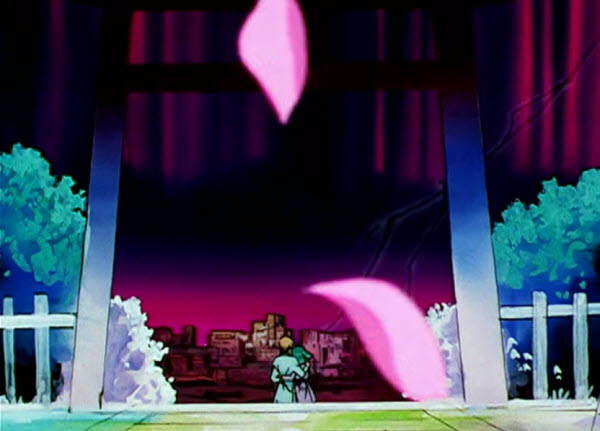 Because it’s just not a proper Spring in Japan without a cherry blossom-strewn stroll through torii gates while malevolent forces threaten to destroy the city unless a group of magical teenagers can stop them.

Eventually everyone winds up at Ginga TV, with the Star Lights dragged into Battlestar Galaxia, the Outers searching the studio for a way in, and the Moonies trapped outside behind a very bird-unfriendly barrier. This seems to imply that Galaxia doesn’t want to face them all at once, which would bode well for our team’s chances if they could ever manage to work together instead of attacking in shifts. (Spoiler alert: They will not manage that this week.)

The Lights are in bad shape and the Moonies are front-row center for the show, helpless to stop it–but wait! 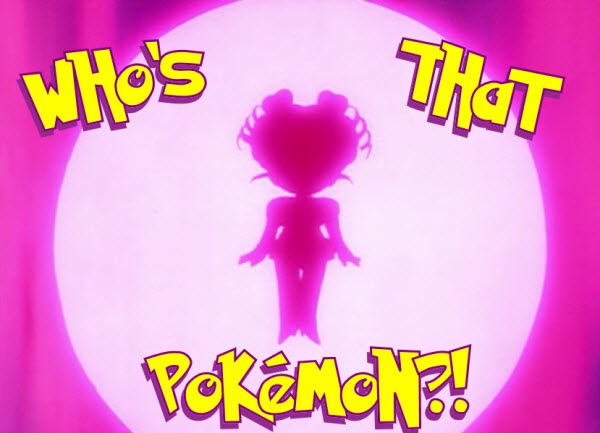 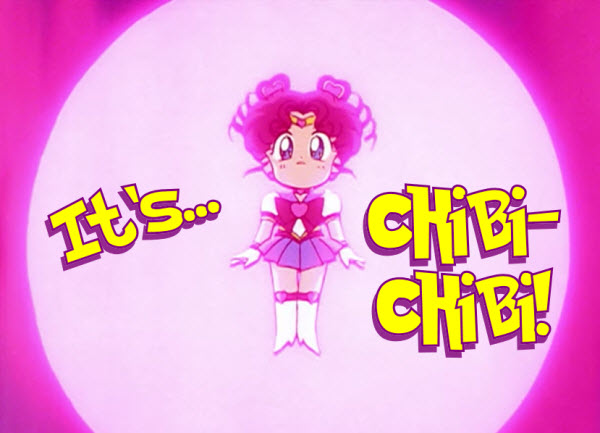 Plot devices save the day again, teleporting the Moonies straight into the Battlestar Galaxia. Taiki is all “NOBODY ASKED FOR YOUR HELP, GAWD,” and the Moonies are all “We’re not here for you, buttmilk, we’re here to protect the planet,” and Usagi is all “Galaxia, you stop it this instant,” and they throw some mad shade at each other until Galaxia gets annoyed and decides to suck out some star seeds.

Again, the staging makes it really unclear what happens next, because it never shows the Moonies bravely jumping forward to defend their friends, which kinda kills the shock factor since it looks like the gals just immediately get owned, but…yeah, I guess what actually happens is Galaxia attacks Usagi and the Star Lights, and the Moonies dive forward to protect them.

So their star seeds get ripped out and they disappear in a cloud of sparkles.

Sorry team, but I can’t find it in me to be concerned or moved or anything but annoyed. The Moonies are obviously not gone for good–we’ve seen their future selves, for heaven’s sake–and Usagi has brought them back to life when they were a damn sight deader than this. So basically all this has done has recycled another plot point and character beat where Usagi has to find the strength to go on without her teammates, AND it’s taken away the characters in whose well-being I was most invested.

Okay, it does do one more thing: the Star Lights now have a reason to go on, because the Moonies remind them that there are people who still care about them. They also ask the Lights to support Usagi and save the galaxy in their places. I will jump through my tablet and strangle the Lights if they aren’t willing to cooperate after this noble sacrifice, but we don’t get to see them choose one way or the other yet, because Usagi is roughly as pissed off as I am and demands that Galaxia return her friends to her.

Galaxia responds by showing off her cool star seed collection, including…oh, this old thing? It just belongs to a certain dapper vigilante who also happens to be the Guardian of Earth.

No offense, Mamoru (and I know this isn’t the best time to say this, seeing as how you’re dead and all), but given that your girlfriend is the one constantly protecting the planet while you just lie around getting brainwashed and stabbed and starvested, you might wanna look into a different line of work. Just a thought.

Episode 197 – Sailor Staring Into the Abyss 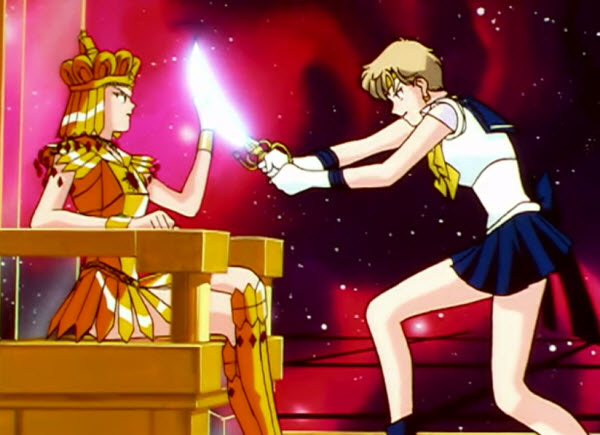 Galaxia takes a time-out from the murder party to explain that this is all quite necessary, you see, because she’s gotta catch all the star seeds in order to become Star Galaxia, Ruler of the Galaxy! Usagi wants to know why, which it turns out was the last thing Mamoru ever asked, too (of his entire existence since he awakened as Tuxedo Mask, most likely).

Which takes us to a brief flashback, as Mamoru’s plane gets time-stopped and he hops onto the wing in his evening best to face Galaxia. He wants to know why she’s making innocents suffer, and her response is the same one she’ll give all episode: She can do whatever she wants ’cause, like, her name is on the lease to this galaxy, fools. (There’s a running commentary this week about property and what someone can truly “own,” but it’s a pretty straightforward message, so there’s not much I can add to it, at least not yet.)

Then Galaxia and The Tux face off for all of five seconds before she rips out his star seed and goes about her merry way. 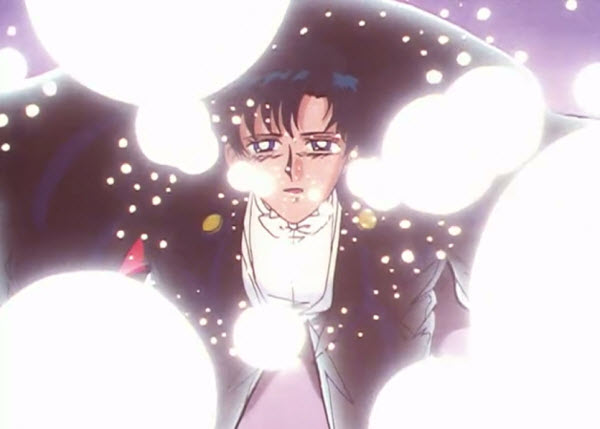 He died the way he lived: Sparkling and useless.

With his last breath, Tuxman promises that the Moonies will stop her, and my dead heart revives long enough to find this very touching and sad, especially since 4/5 of said Moonies have already joined him in that big glitter bin in the sky. Usagi is thoroughly wrecked and the Star Lights can barely stand, so C.C. decides that now (instead of maybe OH I don’t know BEFORE the gals got starvested?!) would be a good time to zip them all away to regroup.

They meet up with the Outers in Ginga TV. Haruka is trying to be a soldier about it, focusing on the mission (“find the Light of Hope”), but it’s clear she’s shaken by the Inners’ sacrifices. HaruMi decide to try their luck on the battlefield while Usagi and the Lights recover their strength. Hotaru encourages the Lights to have faith in Sailor Moon, then she and Pluto are off to join the fracas. It goes about as well as you’d expect. 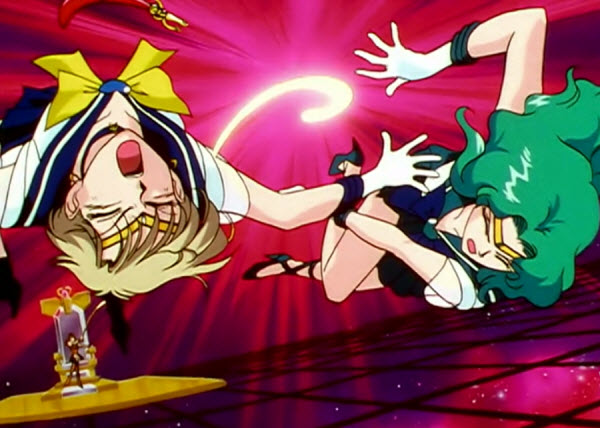 “ZE GRAIL WEAPONS. ZEY DO NOTHING.”

But then, plot twist! Galaxia offers them some fancy mind-controlling bracelets so they can survive as her slaves even after they’ve been starvested. HaruMi… um…agree to this exchange? Okay, this HAS to be a ploy to help them take out Galaxia, because while these two have frustrated the hell out of me this season, they’re nothing if not devoted soldiers ready to do whatever they deem necessary to defeat their enemy. This desperate plan is right up their alley, and the look they share with Saturn and Pluto suggests their fellow Outers realize it, too.

That said, if Nyanko is any indication, their scheme is STILL doomed to horrible, bloody failure because they just gave up their free will. Even if this isn’t an act (it is) and they really did do it out of love (they didn’t), they wouldn’t actually get to be together because Galaxia would always be pulling their strings. And HaruMi saw Nyanko, so they know how these bracelets work. I won’t fault your chutzpah, kids, but you, uh, might’ve wanted to think this one through a little further.

Meanwhile, C.C. reminds the Star Lights of the Moonies’ dying wish, and Taiki and Yaten finally do what everyone and their princess has been telling them to do for weeks now:

TO BATTLE! Usagi, C.C., and the Star Lights return to the arena in time to see Sailors Saturn and Pluto get starvested (thanks for dropping by for all of two episodes, Hotaru, you beautiful underused cinnamon roll!). Hotaru reminds them not to “forget how to believe,” which should really have been followed by two exaggerated winks, and then vanishes, leaving Team Moon to face off against Team Galaxia.

Well, Haruka and Seiya have been wanting to slug each other for weeks now. Maybe this is as good a time as any to get that out of their systems.