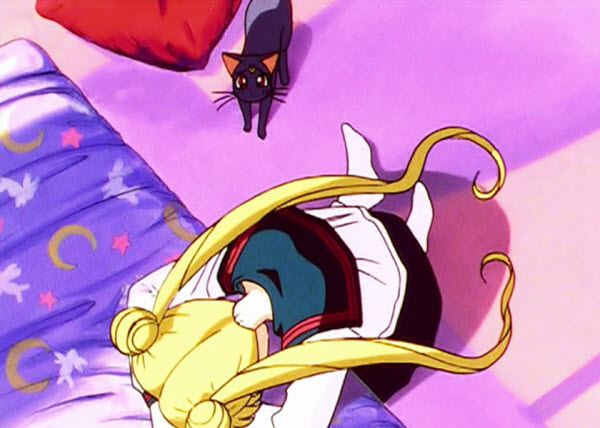 Our teams are still struggling to see eye-to-eye–and in some cases not “struggling” so much as “working very hard to NOT do that thing.” I was pumped when the Outer Guardians returned to the cast at the beginning of the season, but their role in the story has been so limited and aggravating that I almost wish they’d stayed in Time Prison/on their couples road trip instead. Still, despite Team Xenophobia’s best efforts, Team Moonie is slowly but surely winning over Team Lights thanks to a combination of friendship and empathy. Now if only they could do the same for their own allies… 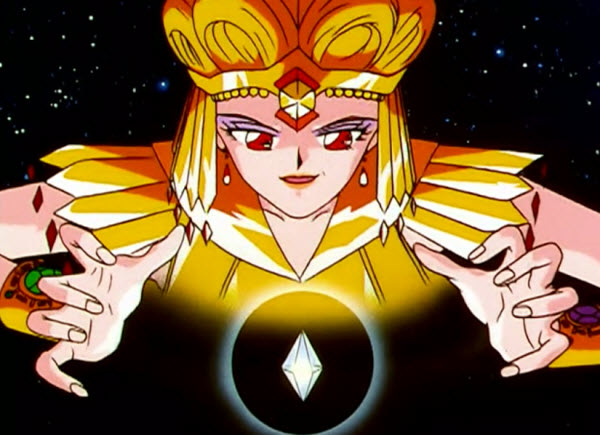 The Outer Guardians have returned for the first time in a while to forgive and forgePFFT AHAHAHA, no, I’m kidding, they’re here to be assholes again. Although, to be fair, Taiki and Yaten are exactly as hostile as they are. They reveal their secret identities to each other and have a super-mature “You stay outta my business,” “No YOU stay outta MY business” stand-off until Seiya shows up to point out that they have zero reason to fight. Seconded, bro. Seconded soooo hard.

There’s an argument where this hostility kind of makes sense–I mean the Lights did show up at the same time as Galaxia, so you could maybe be suspicious of them because of the timing–but that argument is not made here, so basically everyone but Seiya looks like a dumbface. Still, Seiya agrees to stop seeing Usagi to help keep the peace, and the Outers are satisfied.

Cut to school, where the Lights continue to be absent and Usagi continues to be bummed. Everyone tries to cheer her up, but only Mina succeeds by getting her the phone number for the Lights’s rehearsal venue. Yay, friendship! But Yaten won’t let her talk to Seiya since he’s “refusing to see her.” Boo, that-relationship! Eventually the Outers show up to, ah-hem, take credit for this new status quo. Usagi replies:

They insist that they can only trust each other, which would have gotten them all Death By Inner Guardian’d if Usagi had thought that way when she had met them, but whatevs. The important part is that Seiya thinks this is silly too, so he asks Usagi to come to their concert at the local amusement park and listen to their song. (“Which song?” “You, uh, you know the only one we ever sing?” “Yeah.” “That one.”) Cat Bestie Luna encourages her to go, because even cats are more welcoming to strangers than the Outer Guardians.

The concert is sold out, meaning things can once again get a little sweet and a lotta ridiculous, as Usagi stations herself in a nearby(ish) Ferris Wheel and Seiya sings across distance, through glass, and straight into her HEART, serenading her with his back story. It’s mostly stuff we already knew, but it does come with traumatic visuals. 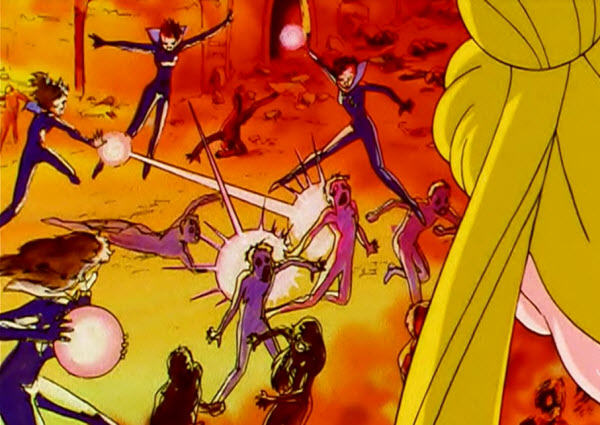 “What, this? Oh, no no no, that’s just how we play tag on my world! Now lemme just pull up the real repressed war memories for you…”

This requires too many feelings, so Seiya promptly passes out. But don’t worry, he’ll wake up soon enough to wander off his stretcher and over to Usagi, just in time for the two of them to get attacked by our latest phage, Sailor Amuse, a.k.a. the amusement park manager. He fights with bomb balloons. Bombloons. (Shush.) And Seiya’s still too injured to transform or even flee properly, so Usagi’s got her work cut out for her.

Luckily(?) the Outer Guardians happened to be out on a romantic date with their chaperon (poooor Pluto), so they help Usagi turn the manager back to normal. BUT THEY’RE NOT HERE FOR SEIYA, OKAY? DEFINITELY NOT FOR HIM BECAUSE BOYS HAVE COOTIES, GROSS, GAWWWD.

The Lights come to collect their wandering friend and the two sides are once again at a stalemate, despite Usagi and Seiya clearly wishing otherwise. Forget “Dammit, Chibiusa”–dammit, Outer Guardians! Stop being stubborn and let Usagi save the world with friendship like she always does! 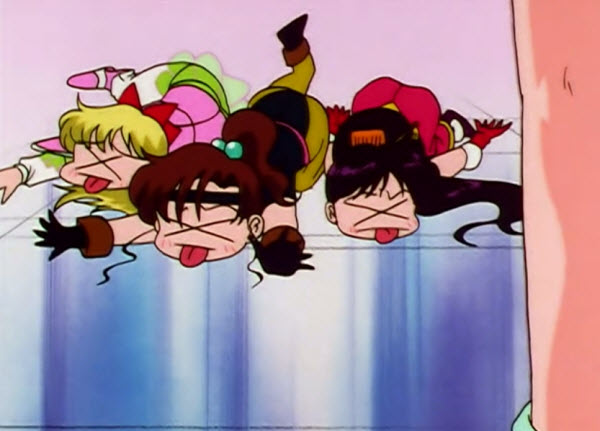 This episode is fun, because it’s about the Inners being silly, and it is also frustrating, because it’s also about the Inners getting beat up and bailed out by others. But we’ll get to that later. First, C.C. has to see-see some glowing red butterflies, don a sailor suit, and find a magical censer. All in a day’s work for plot devices!

The Lights feel this as “the Princess’s energy,” which raises question we will not be answering today, because the arcade is having a special event, and Usagi is TOO DEPRESSED TO PLAY VIDEO GAMES?!

Missing their leader, the rest of the Moonies decide to enter the gaming tournament. But not for themselves, oh, no–they’re here to win so they can have a chance to talk to prize-presenter Taiki about their princess. Usagi has awesome friends. They are also giant cosplaying dorks. This only makes them more awesome.

Ami’s not familiar with the fighting game being played, nor are any of the other Moonies (Mina would’ve won if it was a racing tourney!), but she memorizes the move sets and works her way through the bracket, because genius. She also sees her friends getting pummeled by 6-year-olds. It fills her with determination! 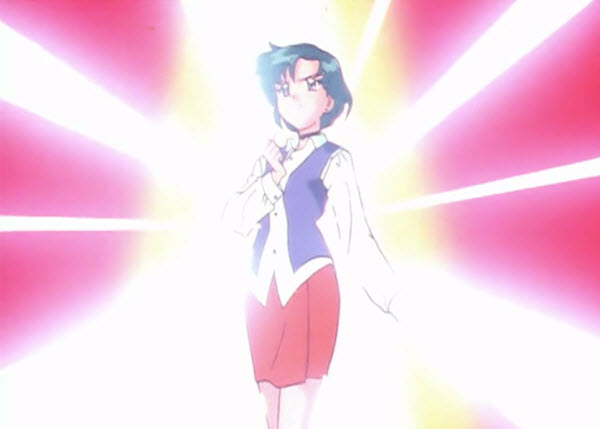 Ami takes on the Fightin’ Wolf in the championship match and owns him, allowing her to get close enough to Taiki to ask for a private word. They’ve watched stars together and helped dying children find their courage, so he figures eh, what the heck, but then quickly loses interest when he realizes it’s not about her burning love-love for him, but about Usagi.

Ami fights for her friend (#UsagiDidNothingWrong), insisting she’s a caring person who “spreads her warmth” and always wants to help others. All true! She also argues that Seiya got hurt because he was helping someone he cared about, and that Taiki would’ve done the same thing. Taiki’s all:

He does his very best to prove her wrong when the other idol (the second target this week so inconsequential I didn’t even bother writing down a name) gets starvested, turns into Sailor Gamer, and starts “Actually”-ing people on the Internet. Mercury is hard-pressed to combat this barrage, so Taiki… walks off, leaving her to handle it alone. See? He really IS heartless, just like he said! So suck on that, Ami!

The other Moonies arrive to help, but Rei and Mina are too into the cosplay to transform and none of them wants to actually hurt the phage. They mostly just get their butts handed to them until Seiya yells at Taiki, he remembers that squishy thing in his chest called a heart, and decides to help the Moonies after all. I swear there was a time when the Inner Guardians could handle fights on their own, but it sure does feel like it’s been a while. 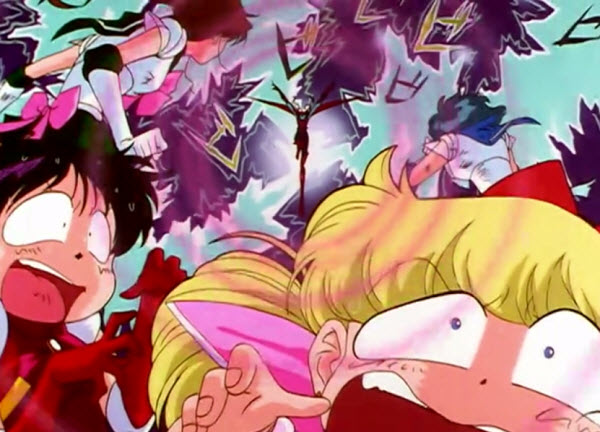 Their CON stat is through the roof, though, I’ll give ’em that.

Usagi conveniently cheers up thanks to C.C’s red butterflies and heads down to the arcade in time to cure the phage. The Lights admire the Moonies for refusing to give up and being willing to endanger themselves to help others, so while Taiki still hasn’t quite accepted their friend requests, he’s willing to at least follow them on Twitter for a while and see how it goes.

I still don’t really know what it is about the Moonies that the Lights have such a hard time “accepting,” given that they have many of the same goals and ALL of the same enemies. But hey, maybe the point is that fear of “the other” is frustrating and irrational and absurd, in which case… well, it’s still frustrating and irrational and absurd, but I can get behind the intent, at least.

Taiki also gets wicked Princess Vibes from C.C. and Usagi together, which suggest things might be a bit more complicated than “C.C. = Princess.” When you’re dancing with the Sailor Stars, “more complicated” is pretty much par for the course, it seems.