Nobody told me Sailor Moon had CLIFFHANGERS. 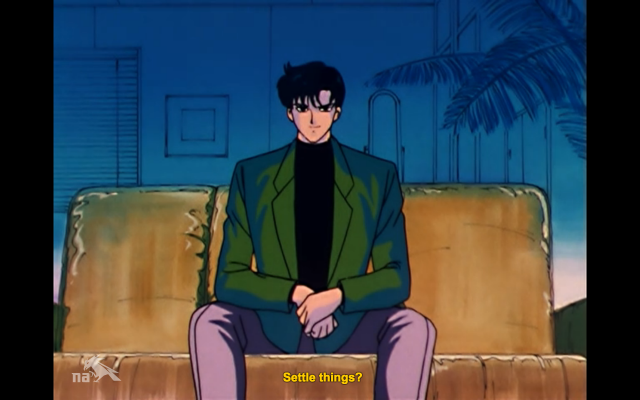 Sailor Moon you can’t just all of a sudden stop wrapping things up in a half hour. Now I have to wait a whole WEEK.

We pick up where we left off last week, with all five senshi together at last. At least for the few seconds it takes for Sailor Venus to establish that she’s not the Moon Princess and to tell everybody that she has vital information to impart… tomorrow. And she has to go. Right now. BYE. Gotta keep up that air of mystery somehow, I guess.

Meanwhile, in the Dark Kingdom (my favorite segue), Zoisite and Kunzite demand to know why they were summoned back when they were just about to destroy the Senshi. Queen Beryl says that the order came straight from their Great Ruler: Tuxedo Mask is not to be killed. Instead he must be brought alive to the Dark Kingdom. Why? That’s on a need to know basis.

Our third establishing vignette of the opening is Mamoru limping back to his apartment, still bleeding from a stab wound and kicking himself for being unable to protect Sailor Moon. Chill, dude, she turned out fine, thanks to infamous vigilante Sailor V. But who to Mamoru’s wondering eyes should appear on his big screen TV? Why, it’s Zoisite, who compliments him on his taste in interior decorating. Man, it was 1992 when this came out THIS TELEVISION IS ENORMOUS. 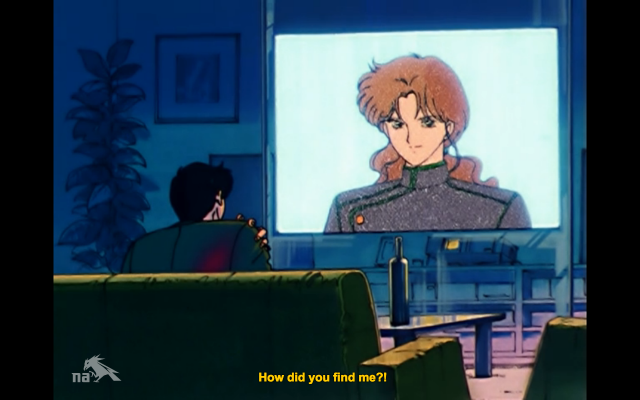 “I saw your face, remember? I mean even on this show, that’s enough.”

Zoisite challenges Mamoru to a final showdown, mano a mano [Editor’s note: excuse me Susana I think you mean mano a Mamo OHOHOHOkay I’ll leave now], at the “Starlight Tower” skyscraper that’s 100% coincidentally shaped like a giant crystal. Winner walks away with all seven Rainbow Crystals. Despite his injury, Mamoru accepts. I can feel the feels start to creep up on me. Stop it, Sailor Moon. It’s been weeks since Nephrite died. I put this behind me.

The next afternoon, Usagi is, predictably, late to the usual meeting at the shrine. But she’s also not answering her communicator, which is somewhat more sinister. Just as Ami, Rei, and Makoto discuss what they could possibly do about this, a completely unrecognizable stranger shows up, claiming to be Minako Aino, the secret identity of Sailor Venus. She’s also with Sailor Venus’ white cat Artemis and looks just like Sailor Venus, so. Minako and Artemis have been watching the Dark Kingdom activity much more closely, and have pinpointed it to the Starlight Tower. She orders the other Senshi to come along with her to rescue Usagi, who must be there. This is entirely true. But how did it happen?

Well, Usagi runs into Mamoru on her way to the shrine (not literally) and notices that he’s both A) acting weird, i.e., he’s actually being nice to her and B) injured. Because she’s a fucking sweetheart, she follows him, despite his protestations, to see if he’s in some kind of trouble. And that’s how Usagi gets bubbled up inside a teleport beam or whatever that grabs Mamoru at the base of the Starlight Tower and takes them both straight to Zoisite inside it.

Once there, Zoisite plays on Mamoru’s sense of fair play in order to get him to reveal his Rainbow Crystals, but of course it’s a trick: Kunzite appears immediately and snatches all of them, leaving Zoisite to deal with Tuxedo Mask and this random girl that they totally don’t recognize. Having got a small cut on his beautiful face, Zoisite retreats to the top floor of the tower, challenging our heroes to follow. Usagi was in a faint for most of the whole scene, so she wakes up confused as to why Mamoru would be fighting Zoisite in the first place, and why he would want the Rainbow Crystals. Also he’s got an injury in the same place as Tuxedo Mask what an utterly strange but definitely not significant coincidence.

Usagi and Mamoru make it to the elevator, which is where they get all their heart to hearts done, and Usagi just asks him why he wants the Rainbow Crystals. Finally: Mamoru exposition. Turns out that when Mamoru was little he and his parents were in a terrible car crash. They died, and he lost all memory of his life before the crash. Ever since he’s had recurring dreams in which a woman with hair exactly like Usagi’s and Sailor Moon’s asks him to find the Legendary Silver Crystal. As repeatedly mentioned: he wants the crystal because his dreams tell him that it holds the key to his identity and past. 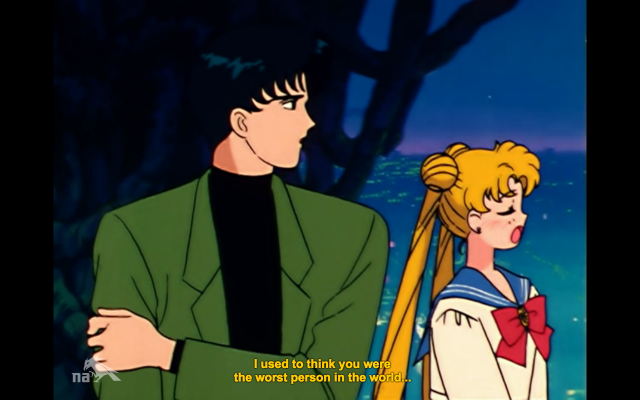 “But I’m bumping you up. To second worst.”

Fuck, I think I’m shipping it. Mamoru thanks her and for a moment, as with ALL MEN in her age range who she doesn’t despise, Usagi imagines him in a Tuxedo Mask outfit and notes the uncanny similarity but still doesn’t put it together that they have the same goals, motivations, hair, wounds, and body type. Let’s get the frak out of this elevator. 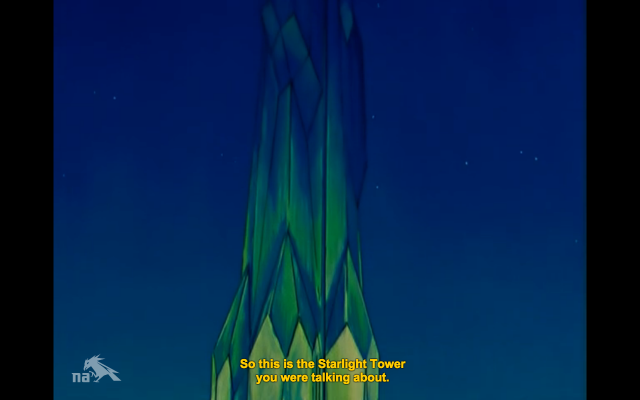 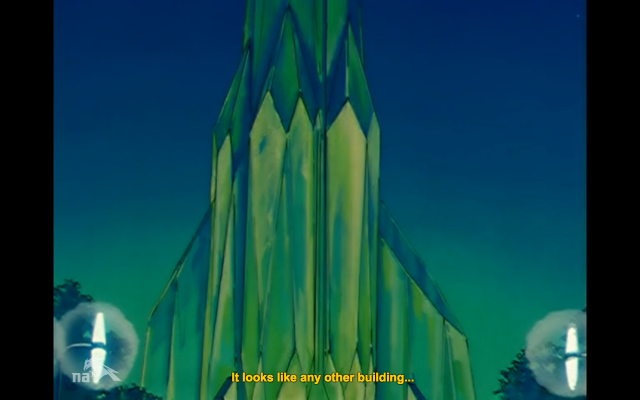 NO, it REALLY DOESN’T.

The Senshi arrive at the Starlight Tower and find the doors barred. This is no problem for Makoto, who thunderblasts her way into one, and they all start dashing up the stairs of this skyscraper, trying to get to the top. Are Sailor Senshi immune to sweating? Kunzite and Zoisite notice that they’ve been discovered by the Sailor Senshi, and decide that it’s time to go whole hog on this mission. Destroying the Sailor Senshi on top of getting all the Rainbow Crystals and capturing Mamoru Chiba? That’ll get them way in with Queen Beryl. “You handle Tuxedo Mask,” says Kunzite. 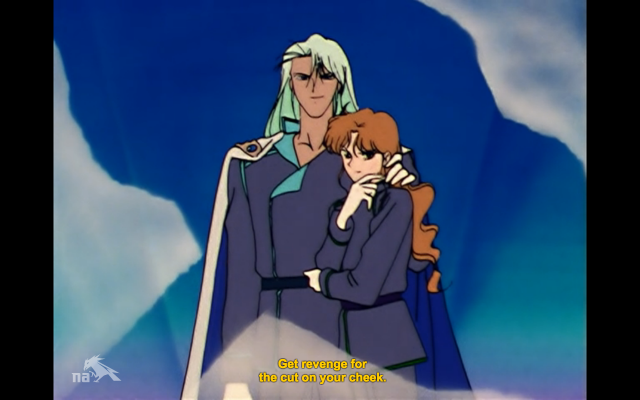 Then Kunzite causes a city-wide blackout and summons a tornado that transforms the Starlight Tower into full on Dark Kingdom architecture. 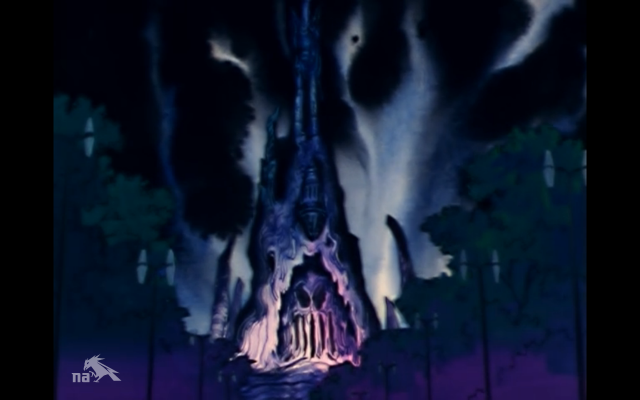 Does it look like a cross between Disney’s Atlantis and a skull? Probably the Dark Kingdom.

Meanwhile, Zoisite sends a giant beam of crackling fire down in to the room that Usagi and Mamoru have just stepped out of the elevator and into, and Usagi is left with a serious dilemma. Transform into Sailor Moon and reveal her identity? Or DIE HORRIBLY? 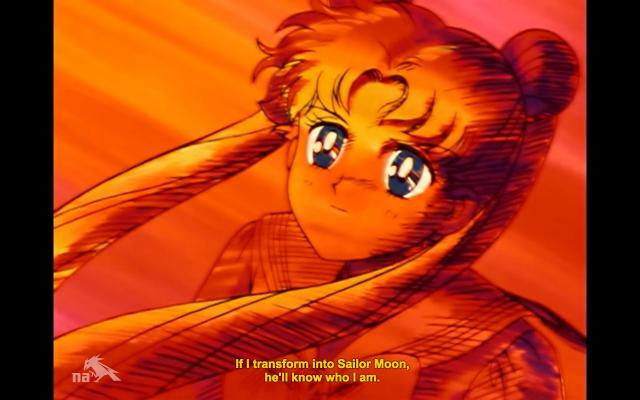 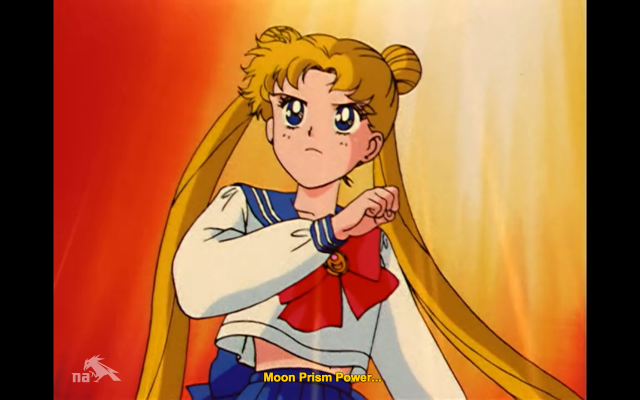 And now, my ugly cackle of the week: 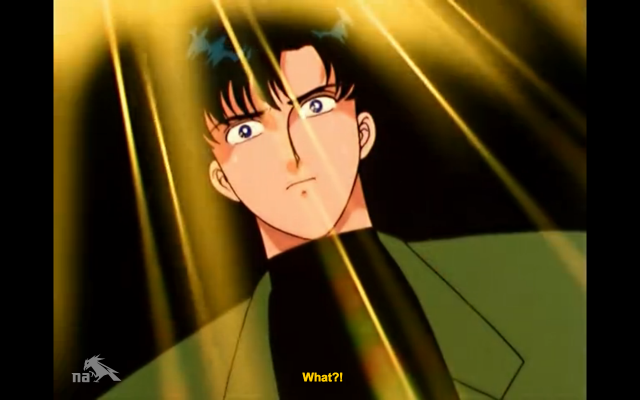 Assuming that everyone had died in the massive explosion, Zoisite begins his badass walk away from the smoke, planning to tell Queen Beryl that Tuxedo Mask died in an accident. Oooh, sneaky Dark Kingdom business. Only he is interrupted by Sailor Moon! Oh well, I’ll just have to kill you and Tuxedo Mask, he sighs. What the hell are you talking about, responds Usagi, Tuxedo Mask isn’t even, like, here. Cue Mamoru’s adorably tiny transformation sequence. 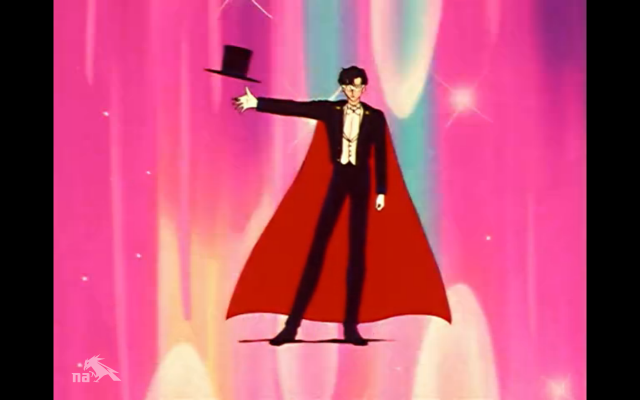 And now, cue my favorite part of the episode, a painterly montage of Tuxedo Mask being nice to Sailor Moon, juxtaposed against Mamoru Chiba being a DOUCHE to Usagi. 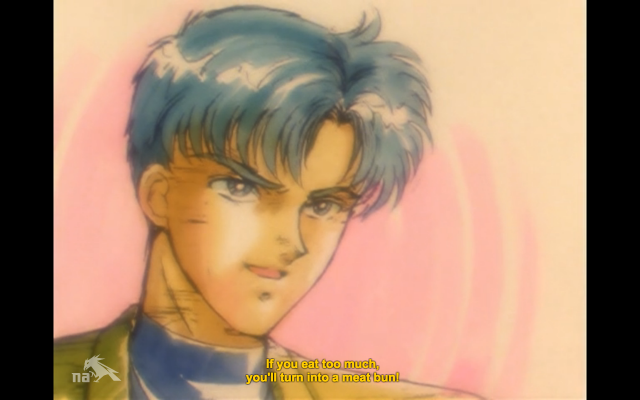 And everything finally clicks. Sailor Moon and Tuxedo Mask finally put two and two together and know each other’s secret identities. They proceed to have a conversation, not about how hilarious it is that they never noticed, oh man, like can you believe? I’ve been seeing you every day. Haha, small world, but about who’s going to protect who now. I mean, Tuxedo Mask usually takes that role, but he’s hurt now and it’s very sweet but the upshot of the whole thing is Zoisite is a dirty cheater and TUXEDO MASK GETS HELLA STABBED. 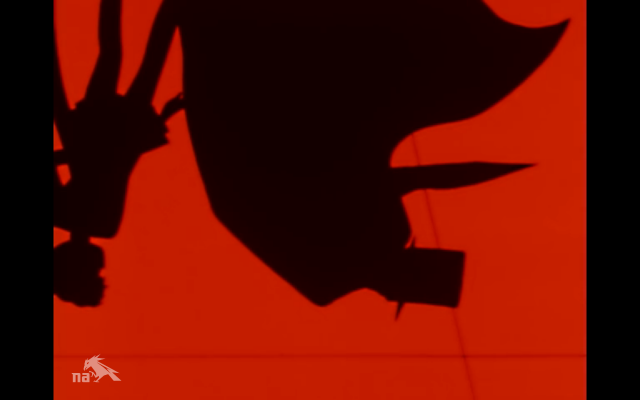 This is the point where the other Senshi finally show up, and I can’t even be mad, ’cause that’s a fuckton of stairs to run up. Zoisite is gloating, Sailor Moon is cradling a dying Tuxedo Mask in her arms, everything is horrible. 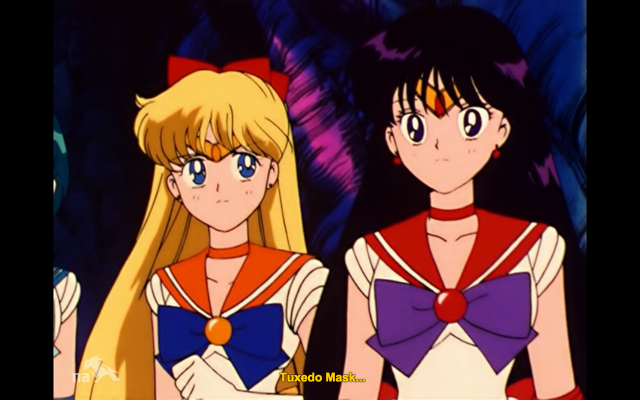 Oh wait, I can’t wait for Rei to find out that her boyfriend is Tuxedo Mask.

Usagi cries a single perfect tear, and at the same time all seven Rainbow Crystals (they’re on top of a velvet pillow and Kunzite is currently admiring them, like you do) levitate, zip off, and then appear above her. They combine with the tear to form the Legendary Silver Crystal, which attaches itself to Usagi’s Moon Wand. Then Usagi transforms into the awakened Moon Princess.

THEN THE EPISODE ENDS.

I really like how easily and skillfully Minako takes the lead with Ami, Rei, and Makoto. It speaks tremendously to what the Senshi have needed for some time now: a real leader, somebody to really ensure that everyone works together. Luna’s a decent guide, but it’s a far cry from her role to real leadership. Of course the ease with which the other Senshi accept Minako also speaks to the show’s core supernatural concept of reincarnation and destiny.

Let’s talk about something I’ve always been kind of uncertain about. Is Usagi’s identity as the Moon Princess meant to be a surprise? I once thought that it might have appeared that way if I hadn’t already known she was before I ever read or watched any Sailor Moon. But now I’m not so certain. Usagi’s name is a literal reference to the East Asian folklore of the rabbit in the moon, she gets special items and abilities that the other Senshi don’t get, she has this strange relationship with Tuxedo Mask, she appears in his dreams… I don’t know. I find the idea of making a show about the person who isn’t the Big Damn Hero to be pretty fascinating, although I’m willing to accept a Second Fiddle is actually a Big Damn Hero twist as a decent replacement.