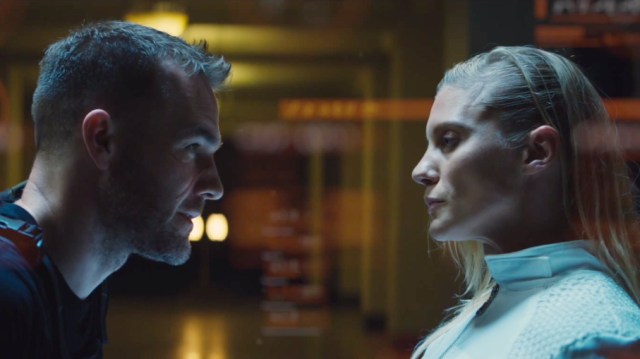 Yesterday the Internet was delighted and/or horrified by the release of Power/Rangers, a fan film from director Joseph Kahn featuring James Van Der Beek, Power Rangers, and Katee Sackhoff (three of our favorite things, in ascending order). But apparently Haim Saban, owner of the rights to the franchise and joint-producer of the upcoming Lionsgate Power Rangers film, was less than enthused by all of that free advertising.

After the video went viral yesterday, Saban Brands made a copyright claim to Vimeo asking that the short be removed, which Vimeo obliged. Kahn protested removal on the grounds that the film contained entirely original shots and no pre-existing footage, explaining over Twitter:

Saban is trying to shut Power/Rangers down. If you’d like to keep watching, tell them to stop harassing me […] Every image in Power/Rangers is original footage. Nothing was pre-existing. There is no copyrighted footage in the short. I am not making any money on it and I refuse to accept any from anyone. It was not even Kickstarted, I paid for it myself. This was made to be given away for free. It is just as if I drew a pic of Power Rangers on a napkin and I gave it to my friend. Is it illegal to give pic I drew of a character on a napkin to someone for free? No.

A “top entertainment industry copyright attorney” told Deadline that the “fair use doctrine,” which allows some freedom to use copyright material, is often not easily definable:

[…] there is a gray area of ‘fan fiction’ where tributes are made by fans and the studios don’t want to piss off their base by going after these people legally. The guy may have a fair use defense, or a de minimis use defense. It’s not a slam dunk by either side. Trademark law applies as well.

In other words, go, Legality Grey Area Ranger, go! Hopefully Saban realizes that, especially in light of the upcoming film, alienating fans might not be the best PR (Power Relations) move. Maybe they should just ask Kahn if he wants to sign on to the actual reboot? I mean, if Power/Rangers gets shut down, Power Rangers Universe logic dictates that it’ll only come back exponentially stronger, anyway. Best to just lean in to this, Saban.