I'm sure God wouldn't mind if we played him just this once. 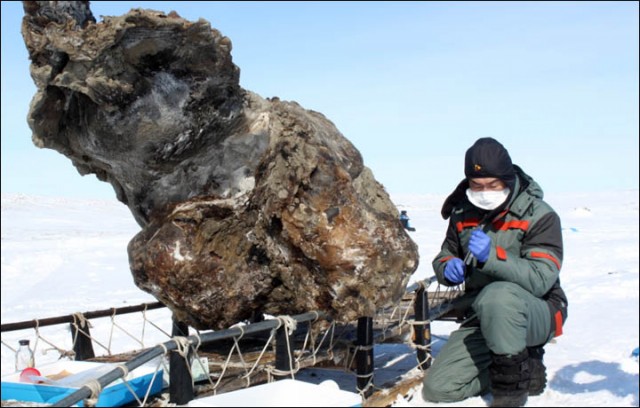 Yesterday, an international team attempted for the second time to determine if they will be able to clone a Woolly Mammoth found with liquid blood in its remarkably preserved remains. Siberian scientists promise they won’t be resurrecting the extinct species without a “scientific purpose,” so don’t get too excited. Yet.

The 43,000 year old specimen was discovered last May in the Arctic Siberian Islands. Researcher Viktoria Egorova explains, “The carcass…has preserved better than a body of a human buried for six months,” providing scientists the ideal opportunity to get up to their elbows in Mammoth guts and discover the tools to create life.

Yesterday, Egorova told the Siberian Times that in the scientist’s second attempt to find preserved pieces of DNA, they were performing an autopsy and collecting tissue samples from the mammoth’s stomach. The team estimated that the autopsy would be completed by yesterday evening, but that it will take months to fully analyze results and determine the feasibility of resurrecting a species extinct for 4,000 years.

Radik Khayrullin, vice president of the Russian Association of Medical Anthropologists, promises that before attempting to recreate a woolly mammoth genome, the team “must have a reason to do this, as it is one thing to clone it for scientific purpose, and another to clone for the sake of curiosity”.

Khayrullin points out that even if scientists do decide to clone the beast, the modern mammoth wouldn’t be identical its frozen parent. “It will be a different mammoth to the one living 43,000 years ago, specially taking into account that there will be interbreeding with a female elephant.”

Semyon Grigoryev, head of the Mammoth Museum in Yatusk, described the team’s experience during their previous attempt to extract DNA:

We thawed it for one day, but not completely, of course. We cleaned it and froze it again. The trunk is the most valuable part of the remains at the moment.

We understood this when we saw the red soft tissues inside. It looked like the meat of a freshly killed animal. It is red and we can see the muscle.

It smells like not very fresh meat. Sometimes the corpse remains of ancient animals are so decomposed that the smell is unbearable. It all depends on the preservation, here it was better and the smell was not so strong.

Yum. So, if the scientists decide their scientific code of honor prohibits them from recreating a race of zombie woolly mammoths to walk the Earth, it sounds like Grigoryev wants to have a cook out.