On Being a Queer Russian Immigrant and Getting to Tell My Own Story, in My Own Words 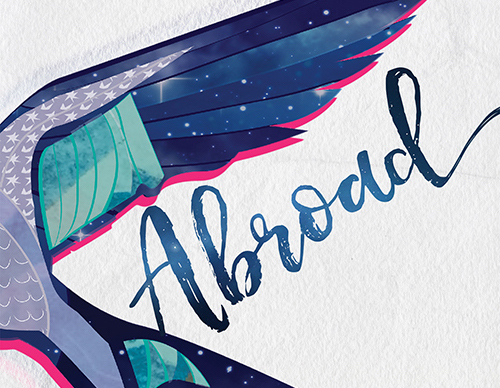 When my family and I all stepped onto our one-way flight from Moscow to New York and were stuck into the middle four-seat section in front of a blank wall for eight hours, I was already gay—I just didn’t know it.

I was eleven. The year was 1993. Coincidentally, the year that Russia finally—for the time being—decriminalized homosexuality.

So there I was—Jewish, scared, not speaking a word of English, clutching the one doll I could take with me, not knowing what lay ahead. When we went through customs, the woman at the counter looked at what we were declaring, then looked at my dad. “You know, you can bring more money with you.”

He knew. We just, you know, didn’t have it. What we did have was bedding, clothes, and my dad’s physics books. We also had a lotto ticket in the form of his invitation to work at an Ivy League school as a visiting scientist. That, above all, put us among some of the luckiest refugees on that plane to New York.

I wouldn’t begin to realize that I was gay for another two years, so I would come up with the wildest explanations for why I would sneak into my parents’ room while they were out grocery shopping to look at the Playboys that they—and I promise, this is true—subscribed to for the articles, and “feel things” while slowly unfolding the centerfold.

Then in eighth grade, we read an article that huffed, and puffed, and blew the walls off my carefully assembled veneer of normalcy. To this day, I cannot tell you why that particular article from YM magazine about a girl coming to terms with her sexuality above all else threw a light onto my own, but there I was—horrified at the dawning realization that, oh shit, dude. I think I’m gay.

Ensue the sort of panic I have never before experienced. As a kid, I could barely conceal a single fleeting feeling from anyone. I had all of the feelings, and I shared them with anyone who’d stand still long enough. But I couldn’t share this. I knew I couldn’t share this, because it would ruin absolutely everything and tear my future away from me. My family had very straightforward expectations of me—finish school, go to college, get married, have kids. That was what you did. It was expected that my sister would do this, and then I’d follow in her footsteps.

What it felt like was a trap. What it looked like was me waiting until I was in the shower to cry, so nobody would hear me sobbing from the panic of realizing I wasn’t normal. I could not bear the weight of it, and spent the whole summer before high school in quiet agony.

First day of high school, and I see this guy across a crowded hallway. Oh, he’s beautiful. It’s like a choir of angels descending and lifting me up—thank God. I’m not gay! I like a guy! What a relief, I think as I find myself zoning out on how cool this one girl is, or how much I want to be just like that other girl. She’s so pretty, I think as I relegate my (now totally mistaken, of course) summer realization to the very back of my mind. It’d be soooo cool to hang out with her all the time.

At the same time, I’m still learning the culture of my new country, and my English, while more or less passable, is far from perfect. I have an accent. I have gaps in my knowledge that I try to fill up with more Full House and VH1 than any reasonable human being should ingest. I’ve started to make friends—even been invited on my first sleepover!—but I’m still different. I’m still weird. I’m still taking my hat off as I walk out of the house in December and my mother yells after me that I’ll get meningitis and die if I don’t put it back on right now. No matter what I try, I don’t quite fit in here; I don’t belong. America doesn’t feel like home, not yet. It feels like a precarious refuge.

And then, in tenth grade, I develop a crush on one of my best friends for the second time in my life.

My older sister—my idol—says in passing that she can certainly understand gay men, but man, she doesn’t understand lesbians. I sink into a new level of despair, only to buoy myself up with a fresh layer of denial. Well, pffft, duh. Of course. Who can understand lesbians? Who would—my God, can you imagine?—want to kiss another woman?

One night, I catch a k.d. lang performance on TV. She’s wearing a suit, her shirt unbuttoned to the top of her chest. The next day, I walk up to my best friend as she’s putting books in her locker and casually tell her that, man, if k.d. lang were a guy, I’d totally have a crush on her.

It takes me another seven years and three straight relationships to gather up the courage to fully admit that I’m gay, begin dating a woman, and come out to my family. The entire time, I feel like I’m segregating parts of myself from everyone I love—my fear of coming out from my queer friends, and my being queer from my Russian immigrant family. I’m bisected, un-whole, and filled with the constant buzzing of fear. I go to Pride and then rifle through every town newspaper just to make sure my picture isn’t anywhere where my parents can find me.

“I don’t even know the words to say,” I complain to my girlfriend on the eve of coming out. She begins to offer suggestions, and I have to interrupt and say, “No, no, like. The actual words. Russian for ‘lesbian’ is too weird for me to say.”

My family doesn’t speak this language. They did not grow up with this, it isn’t a part of them. My sister, when I call and wail at her that I have no idea what to say, heartily sympathizes and says, “I don’t know, man. Good luck.”

As far as I know, nobody else in my family or family circle has ever been gay. As far as I know—I’m certain some have been so deeply in the closet that they have never come out.

That’s what being queer and Russian has meant to me—hiding and fear. All those who are still in Russia, still out, still fighting leave me awed. I cannot imagine that sort of courage.

To this day, whenever I meet another queer Russian in America, I feel breathless—we exist. We exist. And we got out. The realization is bittersweet, at best.

I always knew I wanted to write this story, but I had to find myself first. I had to plant my feet firmly on this soil, take a deep breath, and admit my truth.

I began writing Abroad in the fall of 2014. Four years after marrying the love of my life, seven years after coming out to my family. Until that moment, it had felt like too precarious a thing, too private and precious to share. Knowing that this book will come out in just a few weeks fills me with fear—a fear that feels different from the being unable to tell my truth. It’s fear of exposure, yes. There’s too much of me in this book not to feel vulnerable and frightened. But it is more than that—it feels like the final step out into a new reality. A reality where I felt all of my feelings and splashed them onto the page for anyone to read who stands still long enough.

Russia has gone without me. She has shifted dramatically, changed, reshaped the world in ways that I cannot begin to untangle. But the Russia I have known has left an indelible mark on me that I don’t think I will ever lose. The mark of having been different, having been frightened, and having survived to tell the tale.

Liz Jacobs came over with her family from Russia at the age of 11, as a Jewish refugee. All in all, her life has gotten steadily better since that moment. They settled in an ultra-liberal haven in the middle of New York State, which sort of helped her with the whole “grappling with her sexuality” business.

She has spent a lot of her time flitting from passion project to passion project, but writing remains her constant. She has flown planes, drawn, made jewelry, had an improbable internet encounter before it was cool, and successfully wooed the love of her life in a military-style campaign. She has been nominated for the Pushcart Prize for her essay on her family’s experience with immigration.

She currently lives with her wife in Massachusetts, splitting her time between her day job, writing, and watching a veritable boatload of British murder mysteries.