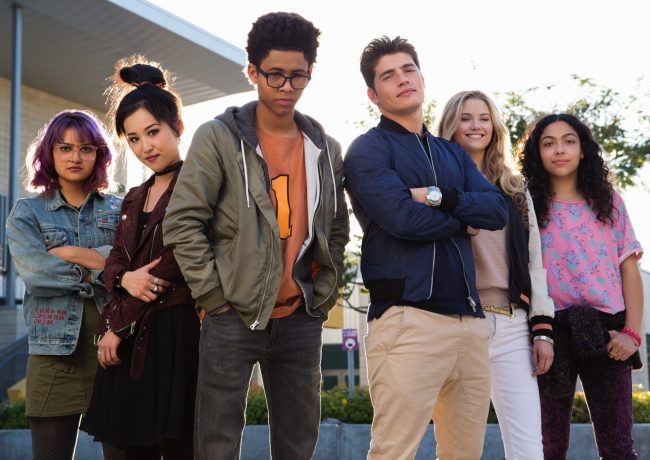 At the Hulu/Marvel Runaways panel at NYCC, anticipation was high—and fans’ long wait was rewarded when we got to meet the cast and watch the pilot episode. The next day, I spoke with Runaways‘ cast and creators to learn more secrets of the show. 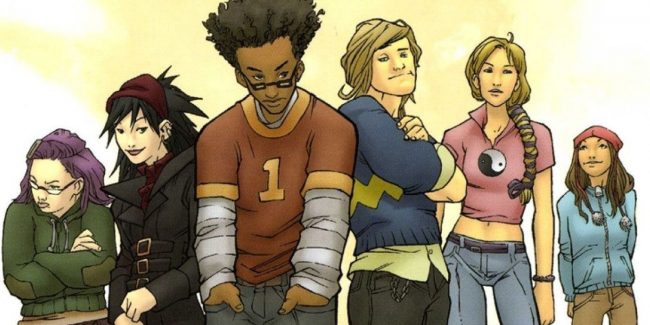 Spoilers for Runaways ahead.

I’m excited to report that the first Runaways was a lot of fun: it laid out an intriguing plot to unravel and introduced a bright, shiny, and refreshingly diverse young cast of would-be superheroes who will no doubt be cosplayed at the Con next year. The series, which is produced by maestros of teenage angst Stephanie Savage and Josh Schwartz (The OC, Gossip Girl) alongside Marvel TV, is skewed toward a younger crowd than Marvel TV’s previous fare, but adults will still find plenty of compelling material here.

The pilot that we saw is smart and fast-paced, and feels much more “plugged in” to our modern world than many of Marvel’s big-tent movies and other TV productions. These could be the kids living next door from you—or the kids sitting next to you in English class—only they end up grappling with unforeseen, out-of-this-world situations and budding superpowers.

Runaways is based on the comic series from Brian K. Vaughan and Adrian Alphona, which achieved a sort of cult status and a few revivals, most recently by writer Rainbow Rowell. While the series’ initial set-up is much the same as Vaughan’s, we heard in the press room that some aspects, powers, and plot points have been somewhat altered, in order to keep the show fresh for longtime Runaways fans as well as new viewers. 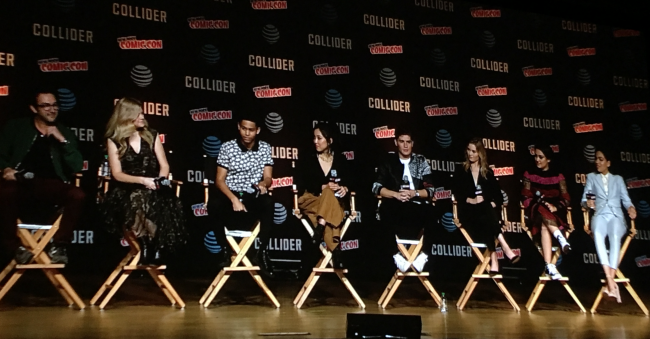 The initial cast of characters will be well-known to Runaways devotees, however. They’re introduced in the first episode as cookie-cutter stereotypes that we quickly discover have hidden depths underneath:

There’s Alex (Rhenzy Feliz), a clever and sensitive guy who is lonely and isolated after the loss of his friend two years before; Nico (Lyrica Okano), clad in an all-black getup and heavy makeup, dabbling with teenage witchcraft fantasies and also struggling with grief, as that friend who was lost was her older sister, Amy; Chase (Gregg Sulkin), the All-American heartthrob, who has taken to hanging out with jock-type Chads; picture-perfect Karolina (Virginia Gardner), who’s meant to be the “millennial face” of her parents’ creepy church; the rainbow-haired “social justice warrior” Gert (Ariela Barer), with her acid tongue and keen observations about the patriarchy; and Gert’s younger sister Molly (Allegra Acosta), navigating early adolescent growing pains and trying to fit in.

We learn that all of them had once been close, prior to Amy’s death, having grown up together due to their parents’ alliance in a “charity” called the Pride. But the loss of Amy drove them apart, and each is very much struggling with their own demons when we meet them.

This is one of the first and most obvious strengths of Runaways translated to TV: these kids are much more complex and nuanced than they initially appear, and they are trying to figure out who they really are—as good a representation of the realities of high school as we can imagine. “All of them have a facade,” the actresses playing Nico and Karolina explained to me, saying that the show went out of its way to eschew stereotypes. “They’re onions; layered.” Part of the first season will be devoted to delving into their backstories and hidden truths, and I was told that we can expect some crucial flashbacks.

Runaways veers into more traditional Marvel superhero territory as the kids start to discover that they possess strange abilities and that their parents are involved in something far stranger. But the conflict with self, self-worth,  friendship, romance, and parental expectations could be played out well without the powers, as it was explored on Savage and Schwartz’s previous shows. The privileged California kids here in glittering mansions have been seen before. It’s the superpowers, and the mystery, that makes everything even more interesting.

In the first episode, we see that Molly can manifest super-strength, and Allegra Acosta explained that it’s when she’s at her most emotional that her abilities are accessed (and since she’s young, Molly needs rest after such exertions; Acosta said that she “powers up” to greater heights with each episode). Molly also catches a glimpse of a strange creature concealed in her house—which got the viewing audience at NYCC clapping and cheering, as we see the briefest shadow of a dinosaur. 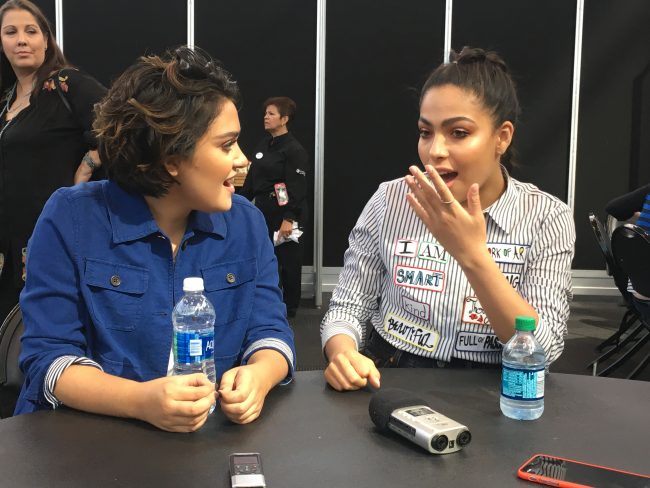 This is the fan-favorite Deinonychus, Old Lace, who will end up having a telepathic connection with Gert. Actress Ariela Barer got me very excited to meet Old Lace, who is apparently portrayed by six puppeteers and is so realistic that Barer said she cried after their first scene together. In the press room, the charming duo of Barer and Acosta waxed rhapsodic about Old Lace: “When she’s around, it’s a party,” they said, assuring that the audience will “fall in love” with Old Lace. “She’s so talented.” 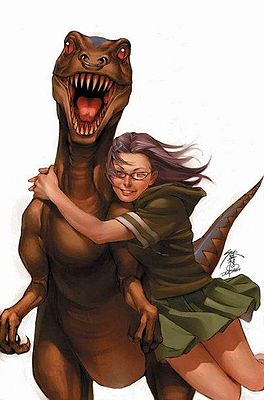 We see Chase, in one scene, striking out against would-be rapists with formidable fists, and we’ve been told we’ll see his special weaponized gloves—the Fistigons—later on (they’re briefly in the trailer). Chase’s icy father is played by James Marsters (Buffy’s Spike) with tightly-held menace, and Gregg Sulkin told me that Marsters is incredible to work with. Marsters has advised Sulkin on how to approach his new fanbase and fame—and relayed mistakes he made as cautionary tales. “The guy is a legend,” Sulkin enthused, seeming thrilled when I asked about his on-screen dad. The British-born, chisel-cheeked Sulkin received high-pitched screams upon his entrance to the Runaways panel, so it’s safe to say those tales from Marsters are going to prove useful when the Runaways fandom kicks into high gear.

We see Nico dabbling with desperate magic that does not work for her in the first episode—but surely will as the series progresses. Lyrica Okano related in the press room that Nico will not be cutting herself as she does in the comics, in order to avoid promoting this sort of self-harm, but mysteriously hinted that her witchy character will explore the idea of “drawing blood.”

In the first episode, Karolina appears under the influence of her parents’ church/cult, but we already witness her yearning to be free and rebel. At a party, she sees her arms as glowing and rainbow-hued, a hint at the powers and origin that will be revealed. I asked Virginia Gardner whether there would be an exploration of Karolina’s queer storyline, as we watch her drawn to two girls kissing on the dance floor in the pilot. Gardner couldn’t reveal much, but she assured me that fans will not be disappointed in this aspect of Karolina’s comic book characterization. 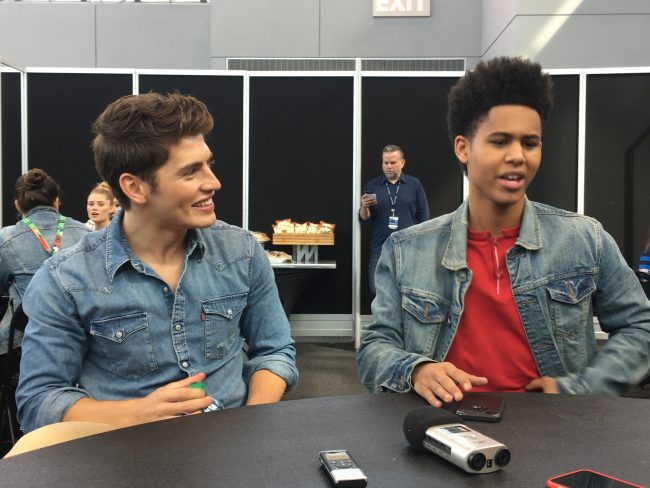 And it is the power-less but brilliant strategist Alex, who manages to reunite his estranged friends before the episode’s end, Rhenzy Feliz is in his element. The audience shrieked with joy when they were all sharing the screen together. (Producer Josh Schwartz related that this was one of the main highlights of NYCC—finally getting to release their work into the wild and experiencing that incredible organic fan reaction.) Feliz had joked on the panel about not getting to have superpowers like his pals, but when I asked him about it the next day, he was keen to discuss Alex’s important role, saying that Alex was “the smart one of the group,” a person who is “calculated, strategic,” which is clearly needed in order to shepherd this misfit band.

The hour-long drama model also enables the creators to tell stories that were not as fleshed out in the comics. We heard that the second episode of Runaways will be a retelling of the first entirely from the parents’ perspective—a viewpoint that muddies the water about motivations and ‘villainy’ and will keep us unmoored as to who to root for. “You’re going to end up conflicted,” producers Stephanie Savage, Josh Schwartz, and Marvel TV’s Jeph Loeb promised. “What about those parents?” teased Schwartz. They mentioned that Brian K. Vaughn remains involved as a consultant on the show, joking that he came for a day and “stayed for a month,” generating a lot of ideas along the way.

When I told them that I was pleasantly surprised by how grown-up the pilot felt, with mentions of sex, drugs, feminism, racism and other present-day elements, the producers spoke enthusiastically of the difference between having a show on network TV versus Runaways on Hulu, which allows them to “push the envelope.” They assured me that this would continue post-pilot.

These up-to-date themes are aspects of Runaways that thrilled me and made me feel like this is the superhero show that we need at the moment. The cast is strikingly diverse—only two of the six main kids are white—and it is majority-female. Runaways features whip-smart dialogue and situations that are rooted in the present, like the kids being made to use standing desks in their classroom, while a sign on the back wall read “Sitting Is The New Cancer.” Gert emerges as a particular voice of her generation, talking about women’s empowerment and undermining the patriarchy, while Karolina seems bound to explore queer sexuality. Racism is approached in how characters interact with Alex’s father.

In short, the show “goes there,” but in a way that feels subtle and real and not like we’re being bludgeoned over the head with social issues. They’re just a part of the complicated lives that all of the characters—and their viewing audience—are trying to navigate. I can’t wait to see where Runaways takes us next.

Runaways debuts on Hulu on November 21st. Jeph Loeb made us all memorize this. Watch the trailer here.