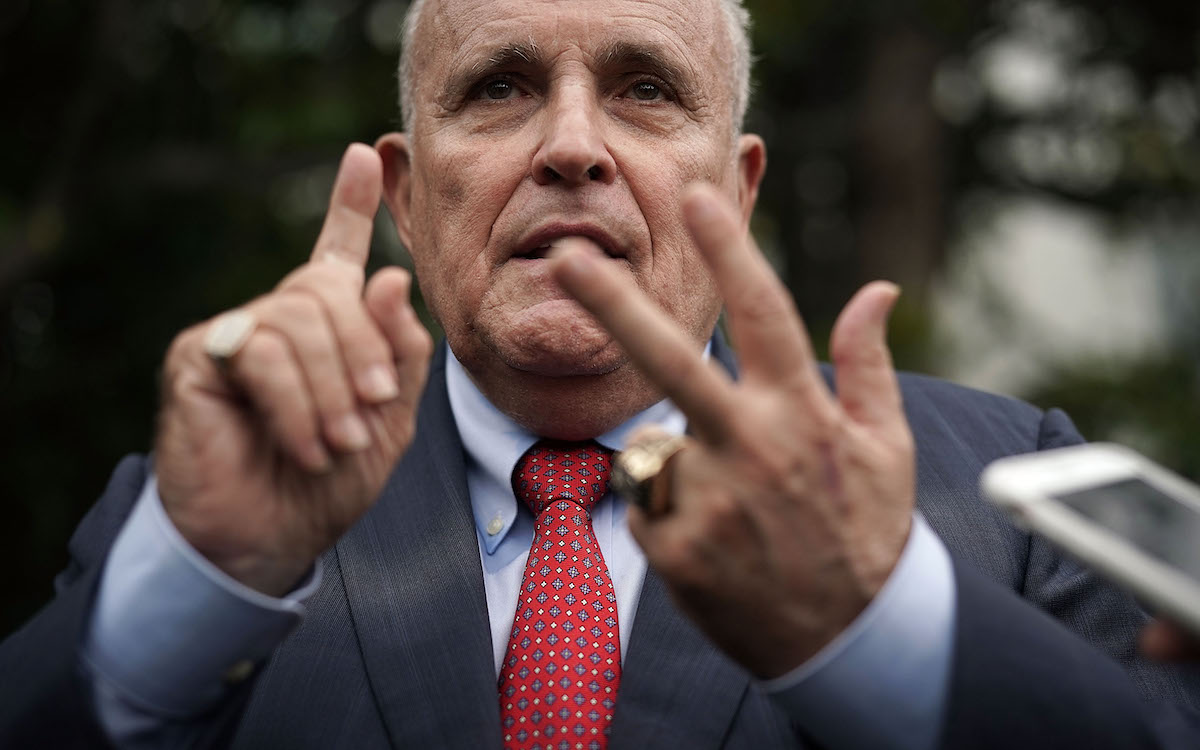 NBC News has published an account of a butt-dial one of their reporters, Rich Shapiro, recently received from Donald Trump’s personal lawyer and admitted crimes-doer Rudy Giuliani.

The three-minute-long voicemail from Giuliani included the lawyer talking to another unidentified man about needing cash. For … things.

The men talk about a Robert and a Charles and some sort of deal in Bahrain. “The problem is we need some money,” Giuliani says at one point.

“The two men then go silent,” writes Shapiro. “Nine seconds pass. No word is spoken. Then Giuliani chimes in again. ‘We need a few hundred thousand,’ he says.”

This is going to be one of those weird days where “butt-dial” is trending, isn’t it?

What pushes this over the edge from worrisome or embarrassing (it is still both of those things) to full-on what is happening??? is the fact that this is not the first time Giuliani has butt-dialed a reporter.

While we’re telling Rudy butt dial stories… he once texted me a voice memo recording of himself talking to a guy. I couldn’t make any sense of it or figure out how he managed to text me a recording inadvertently. https://t.co/SZT09jnOEv

This call was not even the first time he’s butt-dialed this reporter. That last happened just over two weeks earlier!

In that earlier call, Shapiro writes, “Giuliani spends the entire three minutes railing against the Bidens. He can be heard recycling many of the unfounded allegations he has been making on cable news and in interviews with print reporters.”

Giuliani continued to list off accusations against Joe and Hunter Biden.

“There’s plenty more to come out,” Giuliani says. “He did the same thing in China. And he tried to do it in Kazakhstan and in Russia.”

“It’s a sad situation,” he adds. “You know how they get? Biden has been been trading in on his public office since he was a senator.”

Shortly after, Giuliani turns to Hunter Biden. “When he became vice president, the kid decided to go around the world and say, ‘Hire me because I’m Joe Biden’s son.’ And most people wouldn’t hire him because he had a drug problem.”

This was just about a week after the first whistleblower came out to speak publicly about Trump’s phone call on this subject with Ukranian President Volodymyr Zelensky. To be honest, that voicemail reads like a clumsy attempt to deliberately plant a story on a reporter’s radar. A sort of “Look, we must be right about the Bidens because I’m talking about it when I think no one’s listening!” sort of fake-out. I would say Giuliani’s not smart enough to think of that but it’s so poorly executed that it seems entirely too likely.

Whether either of these voicemails were deliberately left or not, it makes one thing very clear: Rudy Giuliani, the person Donald Trump put in charge of overseeing pretty much all Ukrainian-related foreign policy, is very bad at crimes.

i got 6 days to get my sexy “Giuliani butt dial” costume together.

to leave one dubious butt-dial voicemail for a reporter may be regarded as a misfortune; to leave two looks like carelessness, as Oscar Wilde didn’t say https://t.co/HMEl5bJaiJ

just siting here thinking that “butt dial” and “booty call” are both composed of words that are synonyms but they mean very different things pic.twitter.com/GfOiMn0Z66