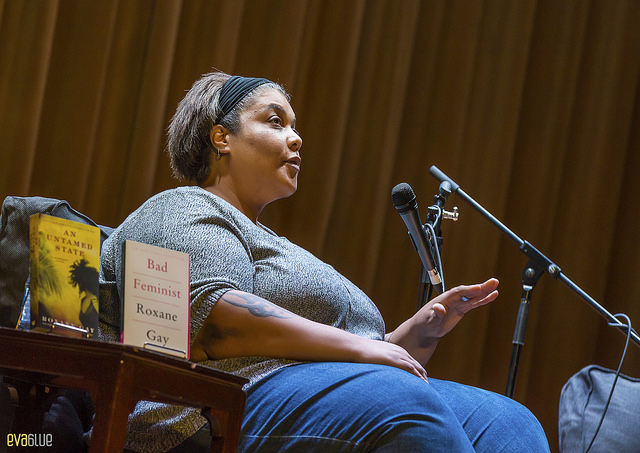 Usually, when interviewers are speaking directly with a well-known writer and activist whose latest book deals with issues of which that writer has first-hand experience, the interviewer’s best bet is to allow the writer to speak on the subject, giving them a platform rather than attempting to describe the experience themselves, or make the experience about themselves. This was not one of those times.

Writer and “bad feminist,” Roxane Gay was being interviewed by Mia Freedman of the feminist Australian site Mamamia for their podcast. Gay did the interview to promote her newest memoir, Hunger: A Memoir of (My) Body, which according to The Daily Dot is about “the anxiety and humiliation that comes with existing in a world that deems you take up too much room, and won’t accommodate your experience.”

What’s sad is that the podcast interview itself is very good. Gay talks about the experiences she describes in the book with candor and grace, and Freedman is very careful in her questioning, specifically talking about the fact that she understands the importance of words, and how easily the wrong ones can hurt. Sadly, the words Freedman used introducing and describing the interview were less-than-stellar.

In a since-deleted (but still archived) post, Freedman writes a super-problematic intro to the Gay interview, which reads in part:

“Hunger is a memoir about Roxane Gay’s body. And I would never normally breach the confidence of what goes on behind the scenes while organising an interview but in this case, it’s a fundamental part of her story and what her book is about.

You see, Roxane Gay is…I’m searching for the right word to use here. I don’t want to say fat so I’m going to use the official medical term: super morbidly obese.”

And there’s the main thrust of the problem right there. Rather than following Gay’s lead about what she calls herself, Freedman decides that she knows better, choosing to use the “official medical term,” which to be honest, sounds way worse. In what universe would calling someone super morbidly obese better than just saying “fat.”

“Fat” is simply a descriptive word, “super morbidly obese” is a judgement about what fat means. Just because it’s the “official medical term” doesn’t make it inoffensive. The medical community has been offensive to fat people forever, with health professionals under and misdiagnosing them for actual medical conditions because they focus too much on “lose weight” as the catch-all solution for anything wrong with them.

And then there’s the fact that Freedman admits that “I would never normally breach the confidence of what goes on behind the scenes while organising an interview…” but she feels completely free to do that in this case. Why? It was completely unnecessary. Gay spoke for herself about her experiences throughout the interview. All Freedman needed to do in her intro was say something to the effect of “Gay speaks to her experiences about x,y, and z.”

Instead, Freedman makes it about her own learning saying, “I’d estimate there were more than a dozen exchanges back and forth between my producer and her people and the details of them both broke my heart and opened my eyes.”

However, the way she breaks Gay’s confidence in a way she admits she doesn’t do for any other guest makes it feel like the details of the behind-the-scenes stuff were meant to shock and sensationalize, rather than illuminate:

“The requirements back and forth with her publishers who had brought her out to Australia to promote her books were extremely detailed.

“How many steps were there from the curb to the door of the building? Were there any stairs? How many? How big was the lift and was there a goods lift? How many steps from the lift to the podcast studio? There was also a lot of talk about chairs – making sure we had one sturdy enough to both hold her weight and make sure she was comfortable.”

And then, there’s the question of how much of this is even true. Gay herself responded on Twitter, and in addition to being hugely disappointed with how all this has gone down, she also seems to be saying that what Freedman wrote wasn’t truthful:

I am appalled by Mamamia. It was a shit show. I can walk a fucking mile. https://t.co/14RNv2Ig0B

It is cruel and humiliating. https://t.co/XY2AU0XPFG

As Gay puts it, this is all a “shit show.” It’s also frustrating that a purportedly feminist website and a self-proclaimed feminist fan of Gay’s work would get it so completely wrong and be so tone-deaf when it comes to fat women. Meanwhile, Mamamia put out an “apology” that is nonetheless defensive about why Freedman did what she did, and doing the equivalent of “I’m sorry this bothered you,” rather than actually being apologetic about what was done.

Next time, I’d recommend they let their guests speak for themselves, and offer the same level of discretion and respect to all of them, no matter their size or the topic they’ll be discussing.