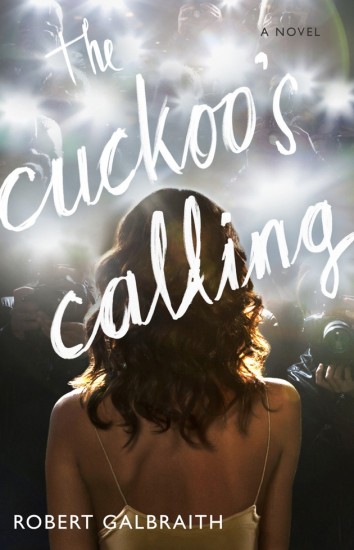 If you somehow hadn’t heard of Harry Potter author J. K. Rowling, you might assume she was a man. In fact, that was done on purpose. She used that pen name rather than her real name,”Joanne,” upon first release of that series at the behest of her publisher, who thought boys might not want to read a book by a woman. But Rowling recently published another novel under a different pseudonym, and it was her idea. The Mary Sue readers, allow us to introduce you to Robert Galbraith.

While the world at large was obsessed with Rowling’s first post-Potter release, The Casual Vacancy, the author was apparently plotting another, secret book. The Cuckoo’s Calling was published in April by Sphere, an imprint of Little, Brown & Co. Here’s the author bio for the book from Amazon:

After several years with the Royal Military Police, Robert Galbraith was attached to the SIB (Special Investigative Branch), the plain-clothes branch of the RMP. He left the military in 2003 and has been working since then in the civilian security industry. The idea for Cormoran Strike grew directly out of his own experiences and those of his military friends who returned to the civilian world. ‘Robert Galbraith’ is a pseudonym.

And the summary of the book:

After losing his leg to a land mine in Afghanistan, Cormoran Strike is barely scraping by as a private investigator. Strike is down to one client, and creditors are calling. He has also just broken up with his longtime girlfriend and is living in his office. Then John Bristow walks through his door with an amazing story: His sister, the legendary supermodel Lula Landry, known to her friends as the Cuckoo, famously fell to her death a few months earlier. The police ruled it a suicide, but John refuses to believe that. The case plunges Strike into the world of multimillionaire beauties, rock-star boyfriends, and desperate designers, and it introduces him to every variety of pleasure, enticement, seduction, and delusion known to man. You may think you know detectives, but you’ve never met one quite like Strike. You may think you know about the wealthy and famous, but you’ve never seen them under an investigation like this.

So how was Rowling found out? The Sunday Times claims they had a feeling something was up. According to the AP report, “The Sunday Times claimed it was investigating ‘how a first-time author with a background in the army and the civilian security industry could write such an assured debut novel’ when it connected the dots. The paper said clues included the fact that Rowling and Galbraith shared the same agent and editor, and that Little, Brown published Rowling’s novel for adults, ‘The Casual Vacancy.’ It also said the book’s style and subject matter resembled Rowling’s work.”

Rowling’s publisher confirmed the Sunday Times’ theory today and said further printings of the book will be updated with a revised author biography. The author said in a statement, “I hoped to keep this secret a little longer because being Robert Galbraith has been such a liberating experience…It has been wonderful to publish without hype or expectation, and pure pleasure to get feedback from publishers and readers under a different name.”