Trump Reportedly Upset Spicer Was Played by a Woman on SNL, so Rosie O’Donnell Offers to Play Bannon

Not the only great manipulator. 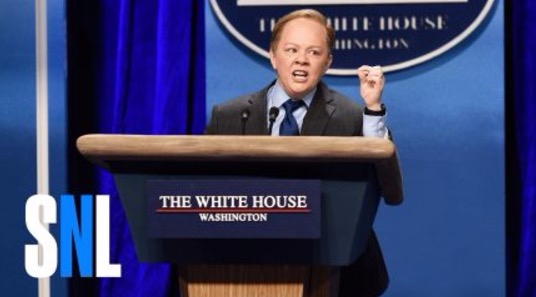 Melissa McCarthy is a comedic genius, and her turn as Sean Spicer on Saturday Night Live will likely be forever remembered as an iconic moment from this political climate—especially to those who have actually watched Spicer’s brutally uncomfortable press briefings live—but word is that while the rest of us were in awe over McCarthy’s performance, Donald Trump only saw one thing during his hate-watch: his press secretary was played by a girl.

Of course, there are no public, on-the-record comments from Trump or his team to that effect, but Politico’s sources told them as much, with a “top Trump donor” apparently explaining that he “doesn’t like his people to look weak,” which should give you a pretty good idea of the sexist mindset we’re working with here. So, because SNL has gotten so mean lately (according to Spicer), how can we best weaponize this childish sexism and turn it against Trump?

Well, he’s already also reportedly (and fairly openly) upset with the idea that Steve Bannon is calling the shots instead of him so why not have Bannon also played by a woman on the show? Up to now, SNL has portrayed Bannon as the grim reaper, but there’s still time to have him throw that cloak off and reveal himself and Rosie O’Donnell, who Trump pretty famously loathes, is up for the task:

There’s probably nothing that could annoy Trump more—except O’Donnell playing Trump himself if Alec Baldwin ever just can’t take it anymore—which means we are very, very into the idea. Please, make this happen, SNL. Annoying Trump has been a solid way of throwing him off balance and helping the fight against what he’s doing. This is your moment! (P.S. You kind of owe us after letting him host.)

By the way, it’d be pretty easy for Bannon to call those shots, considering reports that Trump didn’t even know his National Security Council executive order gave Bannon a seat on it.

(via TVLine, image via NBC)