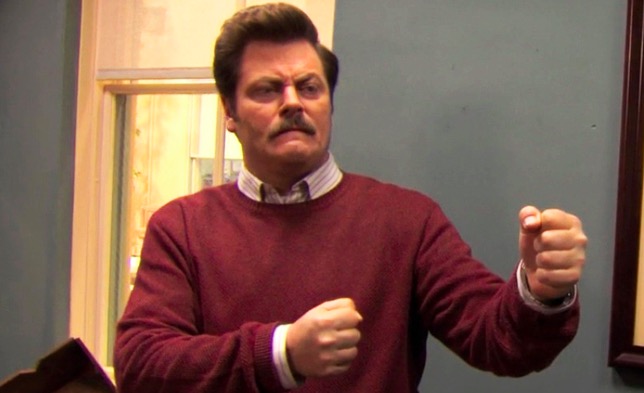 FCC chairman Ajit Pai has been extremely disingenuous in his arguments for removing the “common carrier” classification from broadband internet providers. He’s also a big fan of Parks and Rec’s ultra libertarian Ron Swanson—who one might imagine to be a fan of deregulation—to the point of hanging the character’s “Pyramid of Greatness” outside his office. He seems to have missed, however, Swanson’s penchant for honesty.

Pai has used all manner of specious logic to justify undoing the net neutrality rules that the FCC put in place in 2015. He’s said that they hurt investment in infrastructure, which doesn’t seem to be true when actually looking into the data. He’s said that having different regulations for ISPs, as opposed to online services like Facebook and Google is confusing for consumers, but it’s not consumers who will benefit from changing the current regulations. One look at which side giant, extremely profitable ISPs—the very ones that already have terrible reputations for customer service and quality—are on will tell you who stands to benefit from the removal of the rules.

So it seems that, while Pai’s desire to remove regulations at all costs lines up with the Ron Swanson theory of good governance, he’s not fighting with honor, which is an extreme violation of the Pyramid of Greatness. Due to the constant conflation of actor Nick Offerman with his onscreen character, it seems to have fallen to him to weigh in on Pai’s transgressions, and he came back with a response from “Swanson” himself:

Dear @AjitPaiFCC , I noticed your Pyramid of Greatness and thought it felt strange in your office, given your stance. So I went to see Ron Swanson to ask if he’d care to weigh in & he dictated the below to me 🇺🇸 pic.twitter.com/ZHFrc4Vevf

“I’m flattered that my pyramid of greatness has inspired you. I will remind you that the top category is Honor. Sadly, based on your duplicitous handling of the net neutrality issue, and the way you are willfully ignoring the public you claim to serve, I feel you may need that term defined. Which means, of course, that you don’t have it.”

That last line refers to the text beneath the word “honor” on the pyramid, which reads, “If you need it defined, you don’t have it.” Truly, the last word has been had in this discussion, and Pai needs to find himself a new idol.