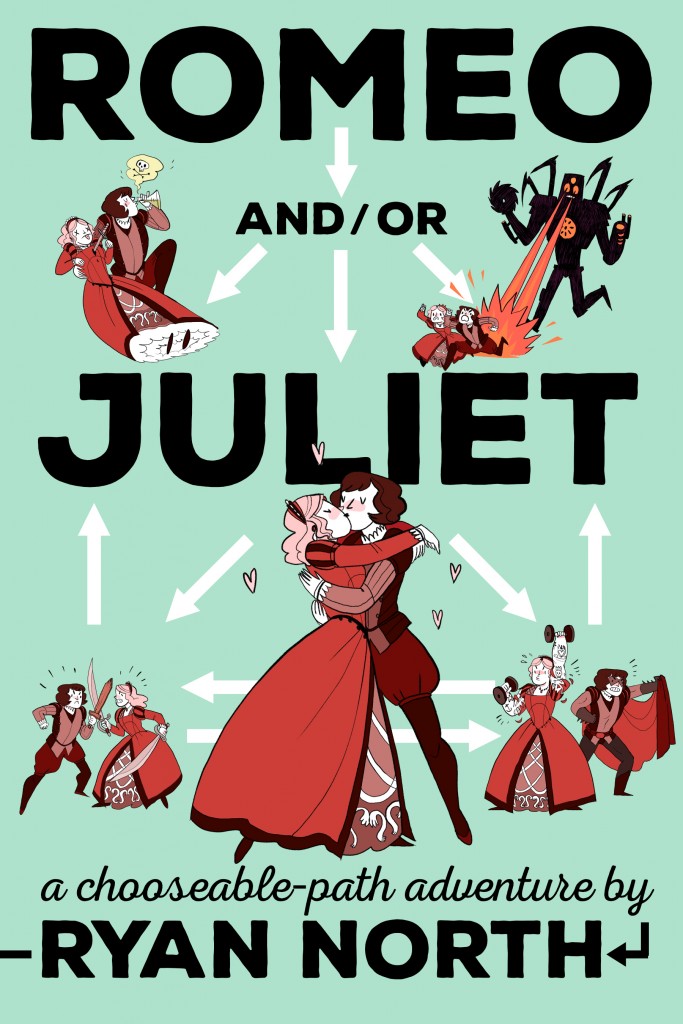 We love Ryan North around here at TMS. We just do. He’s hilarious, a brilliant writer, can escape from swimming pools really well, and we’re always excited when we hear about any new projects he’s working on. So, imagine my excitement when I get an e-mail about a new Shakespearean choose-your-own-adventure book he’s writing titled Romeo and/or Juliet. (Coming June 7th!)

Check out the cover above plus an interview with North about the book and his creative process below!

Jessica Lachenal (TMS): Right off the bat: Why Romeo and Juliet? What made you want to take this story on as your next project?

Ryan North: My last book, To Be or Not to Be, was inspired by me realizing that Hamlet’s famous soliloquy was structured like a choice, and from there it was a short trip to “oh my god what if the entire play was like that, oh my god I HAVE TO WRITE THIS.” And as part of the Kickstarter for that book (which went, uh, really well! We asked for $20k and got $580k, which let us make the best book ever in time!) I’d promised to write a sequel.

Hamlet was great for a choose-your-own-path book because the play is structured like a game: get the mission at the start, screw around with sidequests, then at the end kill the final boss and/or die in the attempt and get your entire party killed.

What attracted me to Romeo and Juliet (honestly it feels weird not to write “and/or” in that title now) was that it wasn’t structured like a game: it’s two teens who fall in love, make some bad decisions, and then die at the end. And you really get the sense that if these teens had made their choices just slightly otherwise, things could’ve turned out way different.

Once I realized that it was pretty much a lock. I did consider Macbeth for a while, but the structure there is “decide to kill final boss / kill final boss / feel guilty about it forever, the end,” which is – less fun? But I ended up putting Macbeth into the story anyway, as one of the (I guess now) trademark aspects of these books: you can choose your way through Macbeth while reading a book-within-a-book in Romeo and/or Juliet. And it’s not the only book-within-a-book you’ll have the chance to play.

TMS: What’s your process like? How do you take a story like Romeo and Juliet or Hamlet and break it up into a choose-your-own-adventure book?

North: It’s super structured and also really organic. For structure, I examined the play, figured out where all the characters were and what they knew at each moment in time, and decided some major choices I wanted to have.

For example, right from the start I knew I wanted an option at the end of the play, when Romeo is making his way back to Juliet, where you can stop to pick her up some flowers instead of just rushing directly there. That delays you, of course, and so when Romeo makes it to Juliet’s crypt instead of finding her (APPARENTLY) dead and then killing himself in grief, you find her restored from her “fake your own death for 42 hours” potion, so everything’s great and it’s a happy ending. Tada! SHAKESPEARE IS FIXED FOREVER.

But when writing it, it’s really a matter of starting with the canonical storyline (which we mark with little hearts throughout the book, so you can see what path Shakespeare took through the story, and then… not do that) and looking for places where the characters could zig instead of zag. Then you fill those out, looking for more places where the characters make decisions, and before long you’ve written a hundred and fifty thousands words of non-linear Shakespeare fiction! And then you realize this is a lot, since To Be or Not To Be was only 90k and that book is a BRICK.

But the nice thing about books like this is that they’re easy to edit: just prune off timelines that aren’t as awesome as the remaining timelines, and that’ll get you down to around 110k words, at which point you can say “done!” and brush off your hands. Mission accomplished!

TMS: How many endings would you say there are in the book?

North: Over 100, and each one is illustrated by one of what I am calling, WITHOUT HYPERBOLE, the Greatest Artists Working Today. You can see a full list of them here: http://www.romeoandorjuliet.com/artists.

We made a program to calculate all the unique pathways through the book, and we’re looking at over 46 quintillion different ways to read this book. That’s a lot! Of course, if you read this book 46 quintillion times a lot of the stories will start to seem PRETTY SIMILAR, so I recommend you stop after the first quintillion or so.

TMS: You’ve got a killer lineup of artists, what is it like working with all of them? I’m imagining it feels like watching all the Power Rangers generations reuniting together… to write Shakespeare, I guess.

North: Oh, it’s great. I give them each an ending, one that I think they’ll a) enjoy and b) be able to illustrate the heck out of. Then they send me pencils, which I asked for just in case another artist landed on something similar. But it turned out everyone had unique ideas so that wasn’t a problem. Then I get to look at final art and get really excited and frustrated that I can’t show everyone these amazing pictures already!

So the process was – just as with To Be or Not To Be – my friend Kate Beaton drew pictures of what our heroes look like. That way each image of Juliet, say, will be done in each artist’s unique style, but also be recognizably her. She went above and beyond, researching period-appropriate attire for each character, and basing their clothing choices on what these characters are actually like. So, not only is everyone wearing clothes that make sense for the time, they make sense for the character too. I love it. Kate’s the best.

I’ve got to give the artists a lot of credit, because I’m sure for most illustration jobs the instructions are like, “Hello, yes, I would like a picture of a robot riding a horse please.” But for this book I sent them their ending to read, as well as a path through the book that led to that ending, so they’d have all the context they’d need, PLUS Katie’s character sketches and eventually location references if another artist had already done an illustration in a similar place. So it’s a lot more detail than they’d normally get, but everyone was a champ about it, and I really appreciate it.

And Noelle Stevenson’s cover! I CAN BARELY HANDLE THAT COVER. It’s amazing, and it’s all thanks to Noelle’s (terrific) illustrations. I sent her some ideas of what it could look like, and she came back with what you see there. SO GREAT. She’s one of the most talented cartoonists working today, both as an illustrator and a writer, and I was super stoked that she was down to come back and do the cover for Romeo and/or Juliet after doing the cover for To Be. It gives the books a continuity, and makes them look great beside each other!

On top of that, she illustrates an ending in the book too, AND she illustrates the full-page smooch scene you can unlock by having Juliet kiss this strange dude she just met at her dad’s party.

TMS: What song from the Romeo + Juliet (the one with Leonardo diCaprio) soundtrack would you say describes you best?

Or do you mean just the soundtrack of the film itself, which would include Radiohead’s “Exit Music (For a Film)” which played over the credits but was not included in either OST release?

Anyway, to answer your question, the song that best describes ME is Garbage’s song “#1 Crush.” Hello!

Anyone else unsurprised by his song choice there? Yeah. Me neither. Here it is because it’s so good why the heck not.

So, friends. Will you be checking out Romeo and/or Juliet when it hits shelves June 7th? You best bet I will be.