Could Another Character We Got to Know in Rogue One Be Headed for Star Wars Rebels? 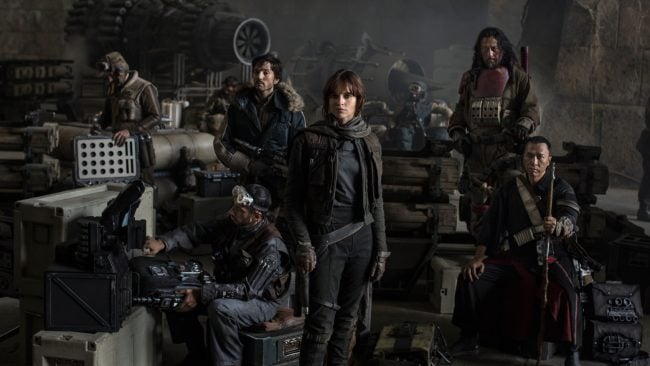 We already know that we’ll be getting a ton more Saw Gerrera via Disney XD’s Star Wars Rebels and that Forest Whitaker, who played him in Rogue One, will be voicing the character. It’s also quite possible that another rebel we got to know in Rogue One could be making their way to the small screen.

According to CBR.com, Pablo Hidalgo’s Star Wars: Rogue One: The Ultimate Visual Guide links Diego Luna’s Cassian Andor to the Star Wars Rebels universe. In the book, it says that “one of Andor’s ‘operational aliases’ is listed as ‘FULCRUM,’ a ‘Recruitment agent in Albarrio sector.’ That codename has been used twice before on Rebels for secret informants; it was originally the codename of Ahsoka Tano and has since been taken on by Imperial Agent Kallus.”

Since Star Wars Rebels takes place five years before A New Hope while Rogue One comes right before it, we know that somewhere between Rebels Season Three and Rogue One, Cassian is supposed to end up with that code name. Meanwhile, the guide lists Cassian as 26 years old, and in the film, he talks about having been a rebel since he was 6 years old. So, Cassian was definitely an active rebel during Star Wars Rebels elsewhere in the galaxy.

What we don’t know for sure is whether that means Cassian will make an appearance on the show, or when, only that it’s totally possible. It would be pretty amazing to see more of pre-Jyn Erso Cassian in action, I’ve gotta say. And if they got Diego Luna to voice him? EEEK!

How might you like to see Cassian incorporated into the show? Or are you over Rogue One Easter eggs? Tell us below!