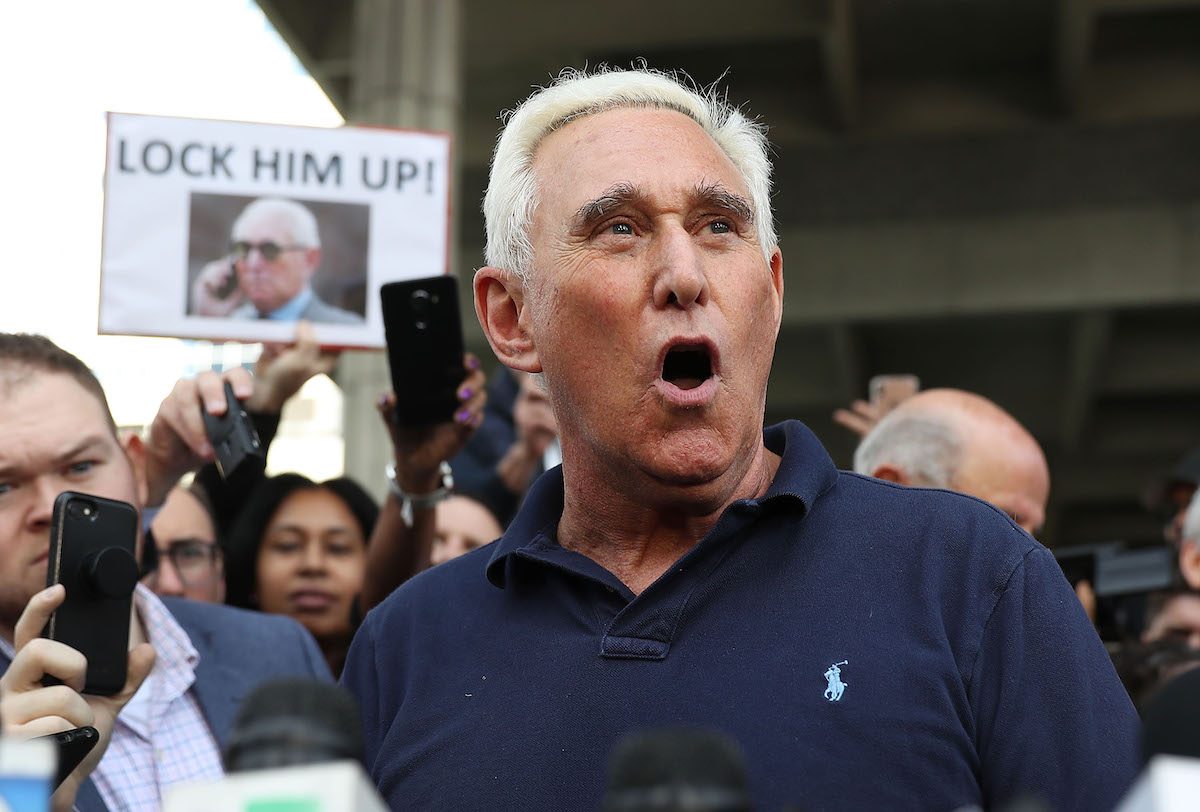 Yet another member of Donald Trump’s criminal web has been arrested and indicted on charges related to his presidential campaign. This time, it’s Trump’s campaign advisor Roger Stone, the self-proclaimed “agent provocateur” with a tattoo of Richard Nixon on his back and a penchant for dressing like a cartoon villain.

Anyone criticizing the use of a S.W.A.T. team in Roger Stone’s arrest clearly isn’t familiar with the danger posed by his collection of trick umbrellas. pic.twitter.com/yrnuk7X398

Breaking: Roger Stone arrested on charges of dunking a cartoon shoe in the Dip. pic.twitter.com/6nenzd14Lc

Stone was arrested by a team of FBI agents early Friday morning–agents who, by the way, essentially did that job for free due to the furloughs of the government shutdown.

CNN footage of the FBI surrounding Roger Stone’s home in Florida as they are about to arrest him in the early hours of the morning. pic.twitter.com/tpA1vMXgxL

It’s always a toss-up as to how Trump will respond to one of his cronies being indicted. Will he go the Cohen route of ‘They’ve always been terrible, I just owed them a favor,’ ‘I barely knew them,’ or maybe the old standby of ‘this good person is being treated unfairly’? For Stone, he apparently just decided to throw all his rage spaghetti at the wall to see if something would stick, citing a “witch hunt” while also making allusions to immigration and, of course, fake news.

Greatest Witch Hunt in the History of our Country! NO COLLUSION! Border Coyotes, Drug Dealers and Human Traffickers are treated better. Who alerted CNN to be there?

Stone was indicted on seven counts, centering on his communications with Wikileaks regarding stolen DNC emails, as well as obstruction of justice in lying to lawmakers about those communications. And as with so many other inept instances of Trump-related crimes, these people really don’t know how not to leave a paper trail.

Wow. Indictment: On or about October 7, 2016, Organization 1 released the first set of emails stolen from the Clinton Campaign chairman. Shortly after Org. 1’s release, an associate of the high- ranking Trump Campaign official sent a text message to STONE that read “well done.”

We are interested in doing a crime. Can you assist?

Roger Stone has been a figure in the most corrupt corners and pivotal moments of American politics since the Nixon years. The Netflix documentary Get Me Roger Stone isn’t something I can exactly recommend because it will make your brain bleed, but it’s a depressingly accurate picture of how a terrible, sleazy, opportunistic, and not too intelligent man helped drive Trump to the White House.

In a 2008 New Yorker profile, Stone said that “Politics is not about uniting people. It’s about dividing people. And getting your fifty-one per cent.” In that way, he was the perfect fit for Trump, who didn’t seem to have any real ideologies of his own, other than getting to the White House. Together, they won by fear-mongering and by spreading misinformation about anyone who could be seen as an opponent–Clinton, liberals, immigrants, etc. Indeed, remember that whole “Hillary is so ill she has a stand-in” conspiracy? That was Stone’s idea.

The indictment reports that Corsi and Stone decided to instigate the “Clinton is sick” lie on August 2. By August 15, Trump was making it a regular part of his campaign. Clinton’s campaign tried to counter the narrative, but media ignored her and ran with it anyway. pic.twitter.com/QmniGemtVT

So it’s a happy Muller Friday for all of us. Except, of course, for the entirely broken justice system that allowed Stone to already be released without bail.

Roger Stone was just released on a $250,000 personal assurance bond.

He does not have to put up one penny. Just to promise to pay that amount if he does not return to court.

Meanwhile, my clients are held in jail on $500 bail they cannot afford for stealing a bar of soap. https://t.co/MnFhr18DiA

This is a bit of a pick-me-up, though:

Roger Stone can hardly hold a press conference to discuss his arrest because the chants of “lock him up!” are so loud. Karma really is a beautiful thing. pic.twitter.com/vV2mjWk2q4

So Sarah Huckabee Sanders can try to distance Trump from Stone all she wants. Everyone else sees Stone for what he is: just one more criminal in a White House full of criminals Trump has surrounded himself with. He told the country he would drain the swamp, and indeed, he’s trying. But only so he can refill it with his own, more lucrative, sludge.

Speaker Pelosi taunts President Trump after “bothersome” Roger Stone indictment: “It’s very interesting to see the kinds of people that the President of the United States has surrounded himself with.” pic.twitter.com/sdnSzr0Za9