The Rocky Horror Remake is Bafflingly Straight | The Mary Sue 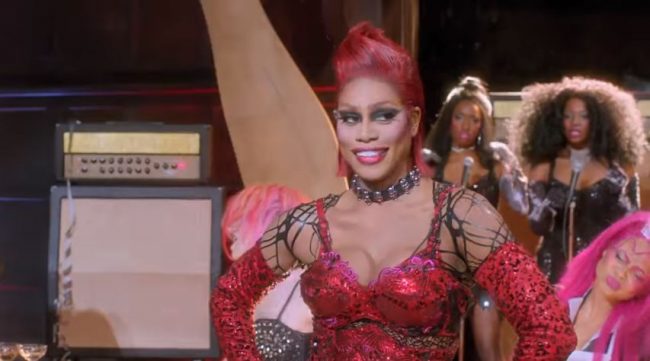 Well, Fox. You did it. And by “it,” I mean you scrubbed and sanded one of the flagship pieces of alternative queer media until it was 87% heterosexual. Congratu-fucking-lations, Murdoch and Co., I knew you had it in you. I just wanted to believe you had more class.

Let me back up a little bit.

I am decidedly one of those folks for whom, as a young person, The Rocky Horror Picture Show was a deeply influential movie–I’ve written about that influence and the impact of the original in some depth, in fact, so I’ll try to keep any personal touch short here. Suffice it to say, it holds a very special place in my heart, not as a group experience but something that I as a rural kid could use as a way to feel slightly less alone in the world.

A remake of The Rocky Horror Picture Show is not the most heinous idea. The show is inevitably a period piece twice over, first of the squeaky clean June Cleaver image of the 1950s in the form of the closeted-and-repressed Brad and Janet (of whom I will always be fond) and then of the 1970s ideal of what queerness and sexual liberation look like. Both of those things have to be grappled with, and you have to get away from the ossified reverence born of the now-stilted and scripted midnight showings, but it’s not impossible.

For example, you could easily get rid of the fact that Frank’s supposed seduction of Brad and Janet is coercion at best by, say, having Frank decide to leave so each party has to actively consent. You could play with various levels of queer interaction rather than playing to Frank as the Evil Seductive Pansexual corrupting everyone around him, not to mention varieties of gender presentation now that there are more terms and flexible concepts available than “transvestite/transsexual” (author Richard O’Brien has since come out as nonbinary, so there’s a start). You could work with diverse casting (the only point on which this adaptation actually succeeds). You could do a whole riff on how respectability politics have swept the very idea and fluidity of queerness that the original celebrated under the rug. There’s stuff to work with here.

Sadly, surprising no one, the RHPS remake (or Rocky Horror Picture Show: Let’s Do the Time Warp Again, as it is laboriously titled) is not interested in playing substantially with the text. It is interested in marketing, and it shows its hand on this front from the credits on by framing the show with a midnight screening (full disclosure: while I’m aware and glad that the midnight shows were a source of comfort and community for many, I’ve never liked them: over time they’ve come to feel something like zoos for straight people, the fact that it makes audiences think they have license to abuse the actors at live stage renditions makes me want to claw my face off, and I’ve heard as many stories of harassment as I have of camaraderie).

And then there’s Laverne Cox, who isn’t so much playing a character as she is modeling a series of admittedly fabulous outfits while doing some better-than-average lounge numbers. She has none of the pathetic, dangerous fury of Tim Curry’s Frank, a comparison I can’t help but make because of how much of the film she spends blatantly echoing his performance. Put simply, she doesn’t feel dangerous or alluring, so while she can hold a crowd I never once forget that I’m watching Laverne Cox. It hurts to watch, it really does, not least because Cox is a demonstrably talented actor in other projects. But with the final project as it is, she feels more like a talisman against cries of straightwashing from people like me than the ideal choice for the role. As if a terrified gaggle of network executives gathered together in a panic to think of all the trans and queer actors they knew, and could think of only one after many hours of effort.

Casting a woman as Frank could’ve been an interesting choice in its own right (and Frank is unambiguously a woman here–they’ve adjusted the script to use she/her pronouns and everything), but the fact that Cox is both a woman and femme-presenting takes a crucial element of genderfluidity away from the character; Curry’s Frank couldn’t be called androgynous so much as picking and choosing conventions as he liked them. And when that goes, a substantial chunk of the movie’s queerness goes with it.

Brad’s whole awakening deal makes exactly zero sense after an apparently positive experience with a woman, the way Janet’s actions are structured means that HER queer experience is glossed over in favor of running to a man, and even the majority of background touchy-feeliness, from the party guests to the theatre goers, is heterosexual. Even the background makeout scene with Columbia and Magenta is gone, and same-gender lips quite carefully never touch during the floor show–Frank tangles tongues with Rocky in the pool and then…very delicately hugs Columbia around the shoulders. It’s baffling.

What’s worse, the bare, grasping bits of non-heteronormativity that do survive only throw the rest of it into sharper relief: Cox and Victoria Justice are basically the only two people with any genuine chemistry (Justice is impressive in general, actually, bringing a great playfulness to Janet from the word go), and Ryan McCartan sells Brad’s embrace of sensuality during the floor show better than any other actor I’ve seen do the scene (including Bostwick). But the majority of it feels like so much surface-level lip service, placing rainbow flags in the background of a supposedly 50s satire when that flag wasn’t in use until four years after the release of the original film.

If I’ve spent a lot of time on this one particular element, I hope you’ll forgive me–it’s just that it’s by far the only interesting thing going on. The rest of it is just run-of-the-mill bad television. The covers of most of the songs range from middling to pretty awful; the blatant attempts to mine the camp of the original by and large fall flat, because attempts to create camp purposefully are doomed from the word go, and some of the choreography was so stunted as to make my skeleton crawl out of my skin for a brief flesh nap.

“Sword of Damacles,” which in the film attained at least a degree of franticness thanks to the POV camera and Curry’s madcap flailing, now consists of the cast patiently backing up so that Staz Nair’s Rocky can walk his few steps in time with the music while Cox steps lightly to the place where she needs to fail to “catch” him until the next phrase. “Planet Schmanet, Janet” is bizarrely cruel after Cox’s put-together performance and her genuine spark with Justice. It’s just a weird, failed mess, and the brief glimmers of potential and thought – the diverse cast, the escaped bits of eroticism, Adam Lambert’s passable Meatloaf impression, the really great costuming, and the inclusion of the crucial thematic clincher “Superheroes”–just make it more enraging than if it had been totally throwaway.

If you’re really looking for a different experience than the usual rewatch of the original, I’d suggest the 40th anniversary staging the BBC filmed last year–it’s the original production, warts and all, but at least I didn’t walk away from that version feeling insulted.

Vrai is a queer author and pop culture blogger; they’ve been listening to the original soundtrack on repeat since the remake ended. You can read more essays and find out about their fiction at Fashionable Tinfoil Accessories, listen to them podcasting on Soundcloud, support their work via Patreon or PayPal, or remind them of the existence of Tweets.