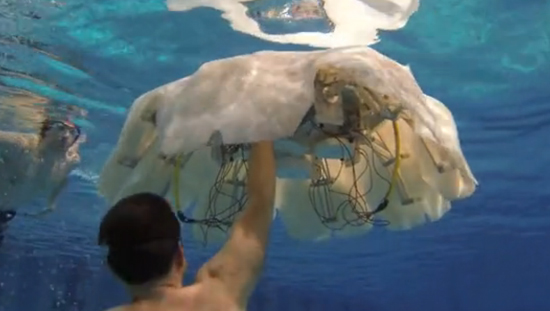 Scientists have been hitting the pool lately. First they were building hive-minded, water-floating robots on behalf of DARPA, and now Virginia Tech’s College of Engineering has created a giant, autonomous robot jelly fish. They’re even jumping into the pool with that thing, which doesn’t sound safe, but hey, more power to ’em.

Measuring nearly 6 feet in length and weighing in at 170 pounds, Cyro is the big-daddy version of the hand-sized RoboJelly Virginia Tech created last year. Taking its naming inspiration from the lion’s mane jellyfish, Cyanea capillata, this prototype robotic jellyfish has got a squishy “blob of silicone” serving as its gelatinous body, which is then wrapped around a bowl-shaped mechanical system.

If you were lost at sea somewhere and saw Cyro or one of its descendants, you could be forgiven for thinking that your life was about to end in a flurry of poisonous stings. Seeing Cyro, though, would actually be a good thing, as these robots are built for reconnaissance.

The idea is that they imitate the real jellyfish — a ubiquitous animal that uses less energy than other ocean dwellers due to its low metabolic rate and unique way of moving through the ocean — to monitor marine environments, clean oil spills, or conduct military surveillance. Both RoboJelly and Cyro are part of a $5-mil project funded by U.S. Naval Undersea Warfar Center and the Office of Naval Research, which are in the market for self-powered machines that can last for months or years drifting through Earth’s oceans gathering as much intel as possible.

And, I hope, keep an eye out for the rising of Cthulhu so it gives us a fighting chance to be ready.

“We hope to improve on this robot and reduce power consumption and improve swimming performance as well as better mimic the morphology of the natural jellyfish. Our hopes for Cyro’s future is that it will help understand how the propulsion mechanism of such animal scales with size.”

This video shows Cyro in action, and Villanueva explains its use:

Strangely, one seems to be concerned whether future Cyros will confused real marine life. What if a great white sees it and thinks it’ll have an easy meal? Indigestion, I guess, and some weird readings back at the Warfare Center.