But What Do You Tip? Sushi Restaurant Brings In Flying Drones To Wait Tables

Watch out, waitstaff -- yours could be the next job to get outsourced to a bunch of robots. 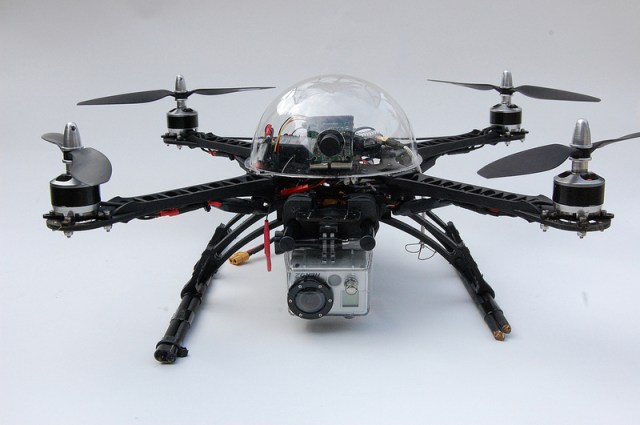 The role of a waiter is a fairly straightforward one that really hasn’t changed much for most of human history…until we arrived at the Age of the Food Service Drone, that is. A sushi restaurant in London has taken that bold step forward by delivering its new rice burgers to sidewalk tables on trays carried by iPad-controlled quadrocopters.

The YO! Sushi chain’s SoHo location in central London promoted the release of its new ‘YO! Burger‘ — a rice bun filled with teriyaki chicken, tofu, prawn, or salmon — by unveiling a new way of serving their food. A video captured the mini-copters as they brought out orders on mounted trays to the surprise of customers and bystanders. The contraption is controlled by an employee with an iPad who can steer the copter at a range of 50 yards by tilting the tablet in the right direction, and is called the ‘iTray’. iCan think of no better name.

YO! Sushi is no stranger to putting technology to work in their restaurants. CEO Robin Rowland boasted about the chain’s past adoption of food conveyor belts as well as “introducing interactive call buttons, speaking robot drinks trolleys, self-heating plates and video game toilets.” That’s admittedly a pretty interesting list, even if you don’t really get to bonus points for the conveyor belt thing. You run a sushi joint. Conveyor belts come kind of standard.

If successful, the iTrays could be introduced to YO! Sushi’s 64 UK locations next year. Now the question is, will robots replace waiters entirely? And what’s the appropriate tip? Someone get MIT on this, stat! Or, you know, at least Zagat’s