There are more robotic fish than you might think out in the world right now, but this is the first one that can move in three dimensions. 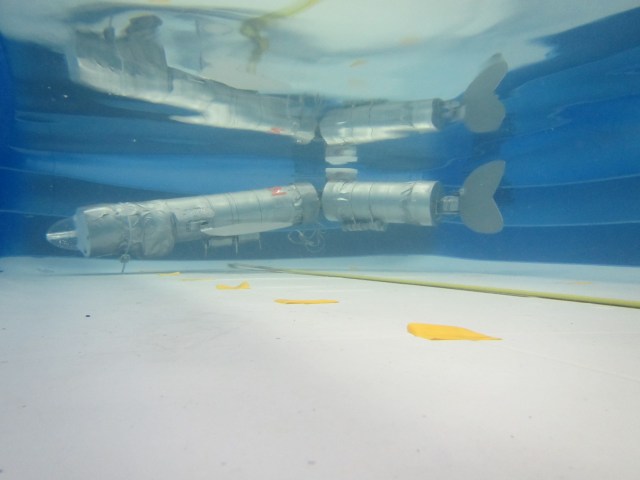 Scientists have been attempting to perfect the robotic fish for years in order to perform difficult underwater maneuvers such as exploring sunken shipwrecks or detect leaks in pipelines. Now, we’re one step closer to robot fish perfection, as the National University of Singapore has released a next generation fish-bot that, in addition to being able to move laterally from side to side, can also dive and float just like a real fish. Naturally, this machine is being called “RoboCarp,” because it’s probably illegal to name it anything else.

According to Fan Lupeng, a graduate student at the NUS Department Electrical & Computer Engineering, the team used a camera to capture all the possible motions that a carp uses to swim and translated it into mathematical data, eventually translating that data into a program that amounts to an advanced carp simulator. The team then programmed that information into into several actuators that help RoboCarp maneuver. In order to achieve the right amount of flexibility and buoyancy in the tail and fins, the team used fine acrylic board and attached plastic foam on either side of the fish. Meanwhile, an internal ballast system changes the density of the robot to ensure that it’s able to successfully dive and float.

This is the first time that a robotic fish has ever be able to move in all directions three-dimensionally, according to the researchers involved. In the future, they plan on equipping the little guy with a GPS and video camera and entrusting him with more complicated tasks than just swimming around and being a robot fish. Presumably, they also plan on eventually evolving RoboCarp to RoboGyarados, an act which will certainly doom us all. Until then, RoboCarp will be featured at the IEEE/RSJ International Conference on Intelligent Robots and Systems in Tokyo this November.

(via Phys.Org, image via NUS)