Rob Schneider Tries to Be Relevant With Defense of Louis C.K. and Kevin Hart 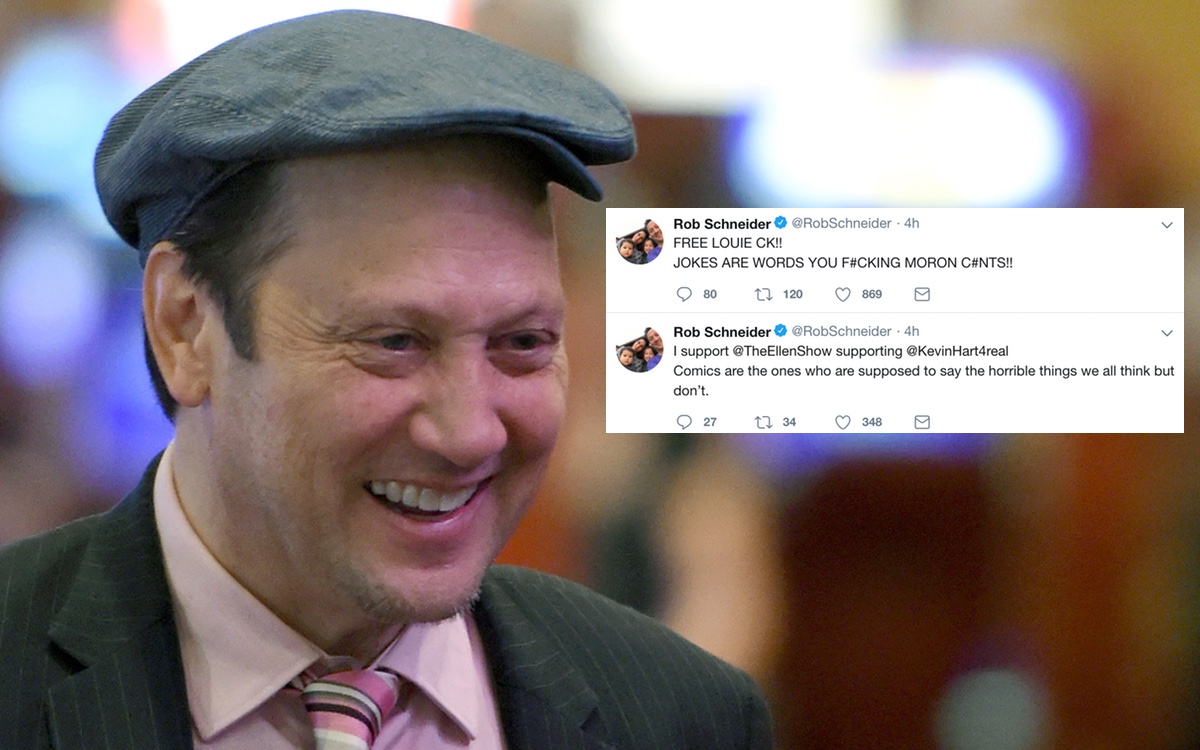 As Louis C.K. digs himself into a deeper hole with terrible sets and use of the n-word, and Kevin Hart embarks on a pseudo-apology tour, their defenders are rising to the occasion and making scenes about how they should be forgiven and accepted. One such scene is by comedian Rob Schneider, who hasn’t really been relevant in a while, so he’s probably trying to gain some notoriety here.

Schneider tweeted in defense of both C.K. and Hart, and used some terrible language to do so, proving he’s just as bad as those he’s defending.

I support @TheEllenShow supporting @KevinHart4real
Comics are the ones who are supposed to say the horrible things we all think but don’t.

The first tweet reads “I support @TheEllen show supporting @KevinHart4real. Comics are the ones who are supposed to say the horrible things we all think but don’t.” His Louis C.K. tweet reads: “FREE LOUIE CK!! JOKES ARE WORDS YOU F#CKING MORON C#NTS!!”

Firstly, nice misogynistic language there. Nothing says “I’m a good guy” like using a vitriolic gendered slur, as well as an ableist slur. “Jokes are words” also doesn’t work as a defense when the words in question are actually hurtful. In one of Hart’s tweets, he “jokes” about physically assaulting his son if he thought he was gay. LGBTQ youth still face intense homophobia and high suicide rates, so there isn’t much that’s funny in joking about that.

There also isn’t anything funny about a white guy using the n-word or joking about school shooting survivors. We’re living at a time when kids are traumatized by school shooting drills and where we had the highest year of school shootings on record. What is funny about children being terrified and killed? Seriously, explain that joke to me, because I must not get it.

Schneider also tweeted a George Carlin quote that states, “Political correctness is just fascism disguised as manners,” and that he’ll boycott the Academy Awards if Hart is not reinstated as host. Given Hart’s recent appearance on The Ellen DeGeneres Show, he might get his wish. However, that just perpetuates harmful behavior, as Hart still has not fully apologized for his words.

The idea that comics have to say horrible things that we “all think” is also ridiculous. Plenty of people never thought these things or, if they did, realized they were wrong and tried to become better people. Humor should not be based around shocking people or deliberately saying horrible things but actually crafting jokes, or even punching upwards at social systems rather than punching down at vulnerable groups.

Schneider’s words are indicative of a culture that would rather defend powerful men and their right to punch downwards than do any sort of actual reflection on the way jokes can assist in oppression. There are ways to be funny without being hurtful, and it’s about time the comedy world actually reckoned with that. If you’re in need of some good comedians to host the Oscars, though, try John Mulaney or Hannah Gadsby.

They manage to be funny without being jerks about it, which is a low bar that many cannot clear.

(via The Hollywood Reporter, image: Ethan Miller/Getty Images and Twitter)