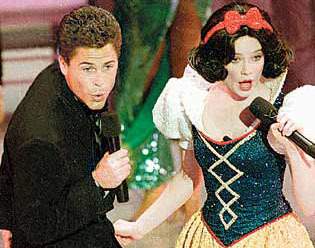 Even if Sacha Baron Cohen‘s blue-skinned love child takedown of James Cameron somehow gets reinstated for tonight’s Oscars, it’ll be hard to match the 61st Academy Awards in 1989. What has been called the worst Oscar ceremony ever opened up with sex scandal-ridden actor Rob Lowe teaming up with Snow White — yes, an actress dressed up as the Disney character — to perform an übercampy duet of Creedence Clearwater Revival’s “Proud Mary.”

Disney actually sued the Academy for copyright infringement for grossly misappropriating Disney’s likeness of Snow White, although they withdrew their suit when the Academy formally apologized.

Now you made it big in the movies

Came to Hollywood, learned to play the game

You became a star

Earned yourself a place in the Walk of Fame

Ali G would be hard-pressed to beat that, Na’vi or no.

Here’s the surreal, how-did-this-actually-happen-at-the-Oscars video of Snow White and Rob Lowe tearing it up: