I was already on board for how incredibly bizarre The CW’s Riverdale looks, but this latest teaser is even more fun. I love mysteries and whodunnits, and this teaser revolves entirely around the central arc that’s going to kick off the first season: the mysterious murder of Jason Blossom.

I have a feeling our hero Archie will be implicated in the murder, since in the comics, Jason was often vying for Betty’s affections. Jason and Archie were usually positioned as rivals. The show descriptions haven’t hinted at that yet, or anything–it’s just a prediction that I’m making. Then again, anything could happen, since Archie has a lot of enemies in the comics… and a lot of love interests!

Which brings us to Cheryl Blossom. Longtime Archie Comics fans will also remember that Jason is the twin brother of Cheryl Blossom, a rich girl who’s got a sometimes-crush on Archie… and, as we all know, she’s got stiff competition when it comes to vying for that boy’s affections. She appears briefly in this trailer, understandably sobbing over her brother’s murder. It’s clear that some sort of foul play has unfolded, and I expect plenty of twists and turns about how it all went down.

I still have absolutely no idea how anyone looked at Archie Comics and thought to themselves, “What if this was a Twin Peaks-meets-Pretty Little Liars mystery series?” But, apparently, Roberto Aguirre-Sacasa and Greg Berlanti thought of that, and, yeah, it does look fun. Or, at least, these trailers so far make the world of the show look fun.

Also, in this trailer, we got a good look at Jughead’s iconic crown hat, as he yells at Archie to take this whole murder mystery thing a bit more seriously: 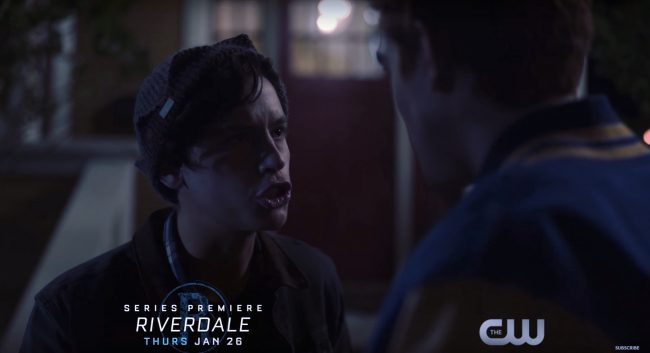 I love that silly, silly hat.

Plus, of course, there’s the release date right there on the screen. Mark your calendars for Thursday, January 26th, folks!