River Song: The Greatest Mary Sue of All Time 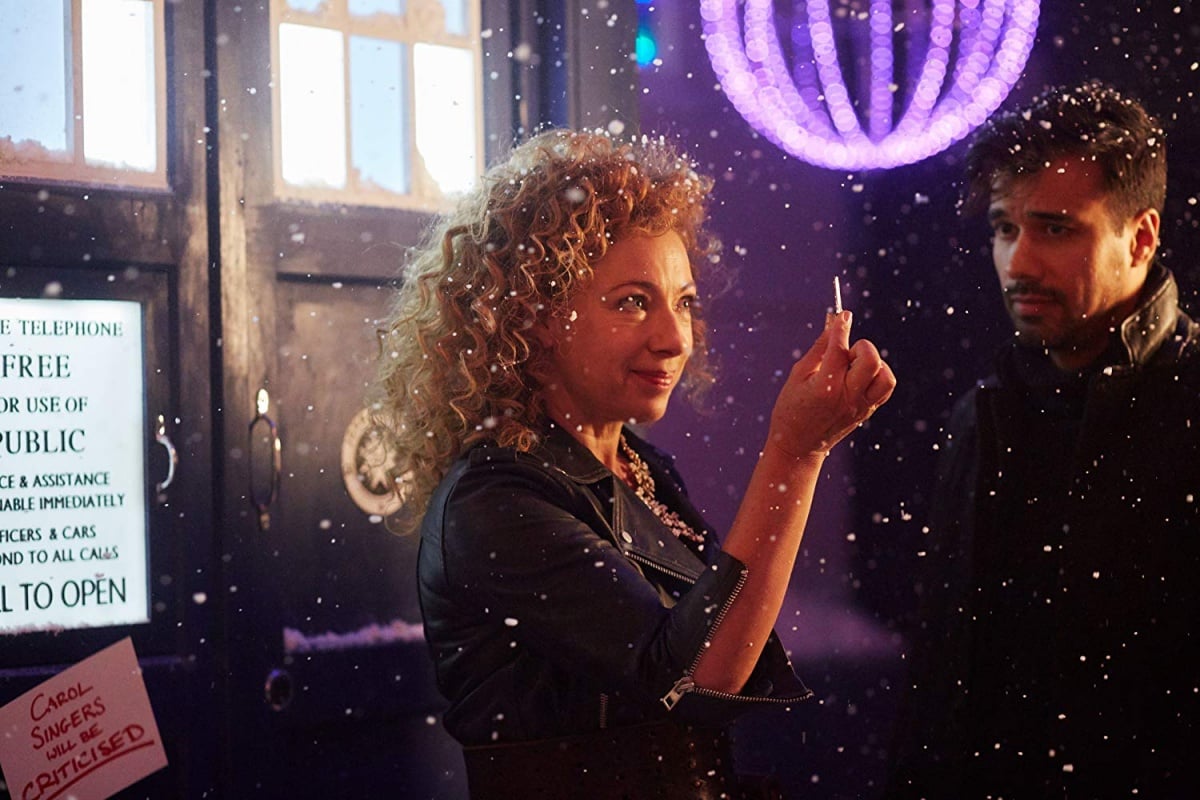 I got into Doctor Who through a handful of episodes but fully committed during the series five, which brought me Matt Smith as my first full-time Doctor and Steven Moffat as showrunner. As I’ve gone back throughout NuWho history, watching from the glorious first series with Nine all the way up to series six, where I tapped out because I just … couldn’t with Moffat anymore, one character has always pulled me back for a stand-alone or two-part arc: River Song.

On paper, River should be the worst, and I’m sure that for many, she is. She enters the show in the two-parter of “Silence in the Library” and “Forest of the Dead,” which introduce us to Professor River Song, a mysterious woman from the Doctor’s future who is also a time traveler, has a sonic screwdriver, and knows the Doctor’s name. Um, girl, who are you? Everything about River Song screams OC from a Doctor Who fanfiction. Not since Galahad has a character been inserted into mythology to be the bestest ever so on the nose.

But not only was she real, but there were ways in which River was always subverting expectations about what a female love interest for the Doctor could look like—to a point, of course.

To start off, we need to begin with Alex Kingston herself. While she is without a doubt a gorgeous woman with a head of hair angels long to rest in, she is older than David Tennant, Matt Smith, and Christopher Eccleston, which already subverts the idea of the Doctor only being able to be with a young ingenue he plucks from the world of the mundane and helps reform into a better person.

River is very much the result of Moffat’s idea that the Doctor would only be drawn to mysterious women, rather than just appreciate the beauty of humanity and humans themselves. It’s a mindset I don’t enjoy when it comes to how Moffat writes his companions, but when it comes to River, it seems refreshing, because older women don’t usually get to be that.

River’s character exudes joy while still being someone with experience. When we first meet her, she’s able to go toe-to-toe with the Doctor, and continues that throughout the series, not just in terms of general skills, but knowledge of the TARDIS and future events. It is no wonder that the Doctor finds her fascinating, as did I, until the eventual backstory reveal. So, yeah, I hate that River Song is the gamer name of Melody Pond, and that she’s Amy and Rory’s daughter and best friend that they accidentally grew up with because time travel. It’s really contrived, and the way it’s handled ignores the sadness of the fact that Amy and Rory weren’t allowed to raise her own child.

It also makes River’s entire existence literally revolve around the Doctor, which is my biggest problem with her character, despite how much I love her.

Yet, in a lot of ways, because of Kingston’s performance, it works for me—at least with River. She still feels like her own person, definitely has a lot of Amy’s personality (which makes sense, mostly), and I enjoy that she has other relationships, is always dripping with double entendre, and really knows how to keep Eleven and others on their toes. It’s refreshing to see that in an “older” woman (the Doctor’s in-universe numerical age notwithstanding), without it being mocked (well, beyond the cheeky Mrs. Robinson jokes).

However, the thing that I feel always surprises me about why I like River, beyond her being fun, sexy, and a bad-ass, is that I really do enjoy her romance with the Doctor—partly because I love star-crossed romances, but also because I enjoy that River’s relationship with the Doctor is truly beautiful to watch. It’s a story of two time travelers only half knowing each other throughout their lives. When River gives up her life for Ten, she does so in order to save all the memories she knows they will have together, but it doesn’t mean that her life is only about the Doctor. We know she’s had at least two wives and four husbands, including the Doctor.

Doctor Who: The Husbands of River Song ends the story between the Doctor and River, with her finally being taken to the Singing Towers of Darillium, which was meant to represent what the audience already knows to be the last night she spends with the Doctor, before she ends up going to the Library to die and eventually save Ten. With Twelve (played by a delightful Peter Capaldi), River gets to express that she doesn’t want to live forever, but that happily ever after just means time—time together, which is what they get when the Doctor reveals that a night on Darillium lasts twenty-four years.

It’s a beautiful ending to a relationship that was always meant to end, and that’s fine. I don’t think that the Doctor marrying and loving River means she’s the best, not by far, but I think their romance is a great representation about what all love, at its best, should be about: the time you spend together, making it count, and knowing that just because it ends, that doesn’t invalidate it.

A great love doesn’t have to be your only love, and sometimes one night together can feel like twenty-four years.

So, despite the fact that River is written to be the coolest ever, it works because she’s never there for too long, her presence don’t step on the Doctor’s relationships with anyone else, and when she does show up, she owns her cool label without hesitation. In many ways, she is one of the great modern “Mary Sue”-type characters, and I wouldn’t have it any other way.

Who are your favorite non-companion Doctor Who characters? Let us know below!