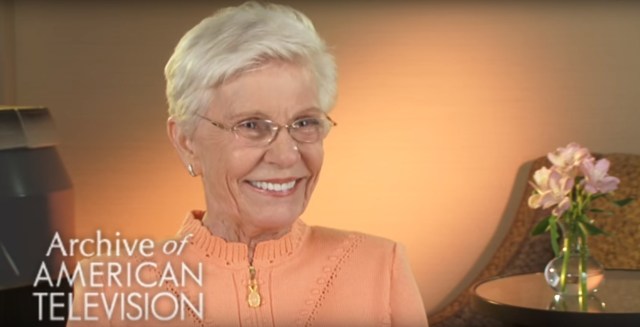 I’m totally going to show my age, but when I was a kid Nick at Nite was new, and the “old shows” on it were from the 1950s and 60s (now, they’re from my childhood). One of the shows I loved the most was The Patty Duke Show, a show that—even though it was “old” was still one of the rare sitcoms with not only one, but two girls as its protagonists. The teen girl on that show was basically Tatiana Maslany before Tatiana Maslany, playing two roles every week, and she was amazing. Her name was Patty Duke, and she died this morning at the age of 69.

The cause of death was sepsis related to a ruptured intestine that she suffered on Thursday. According to The Hollywood Reporter, her family released the following statement:

This morning, our beloved wife, mother, matriarch and the exquisite artist, humanitarian and champion of mental health, Anna Patty Duke, closed her eyes, quieted her pain and ascended to a beautiful place. We celebrate the infinite love and compassion she shared through her work and throughout her life.

She’s survived by her husband, Michael Pearce, and her two sons Sean and Mackenzie Astin, whom she had with her former husband, John Astin (Sean, from a previous marriage, was adopted by Astin, and Duke and Astin had Mackenzie while together). And she’ll be remembered for a long, brilliant career in theater, film, and television, as well as for her mental health advocacy after she revealed in her 1987 autobiography Call Me Anna that she had bipolar disorder (which was then called “manic depression.”).

It was her performance as Helen Keller in the film adaptation of The Miracle Worker that won her an Oscar for Best Supporting Actress at 16 years old, and she was then the youngest person to receive an Academy Award in a competitive category. If you watch the clip above, the climactic scene where Keller’s teacher Annie Sullivan (played by Anne Bancroft) finally gets through to her and teaches her that things have names, it’s easy to see why.

But it’s not as if this was her first go-round. She first tackled the role on Broadway at 13 years old (also opposite Bancroft), having trained with her manager to do things blindfolded for a year beforehand. She was the first kid to have their name above the title of the play on a Broadway marquee, and ended up winning the Theater World Award as Most Promising Newcomer (but not a Tony, which boggles my mind!)

She was the youngest actress to do a lot of things—like starring in an eponymous sitcom, for instance. The Patty Duke Show ran on ABC from 1963-1966, making her the most popular child star in America. It was about, well, identical cousins, as you’ll learn in the super-catchy theme song above.

She conquered television, film, theater, and a battle with mental illness (and even had some pop hits!). She was an advocate, activist, author, and has won three Emmys and one Oscar for her work. Her accomplishments are incredible, and if her last tweet was any indication, she ended her life surrounded by love:

30 years ago today, Mike and I married. We having a very happy and quiet day. Love and hugs to all

Rest in Peace, Patty. Thank you for being such an inspiration with your work on-screen and off.