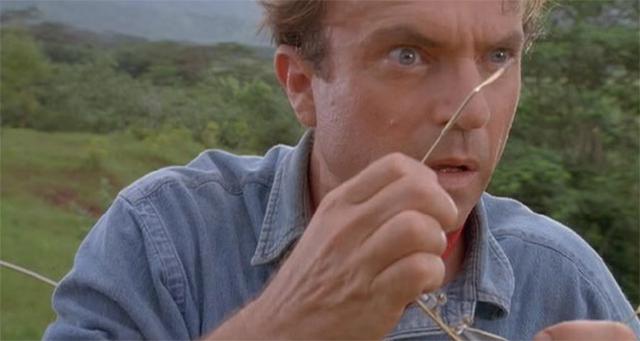 Watching Sam Neill and Jeff Goldblum take the screen together in Thor: Ragnarok might be the closest thing we get to a Jurassic Park reunion, as Neill, who played Dr. Grant, has said that he’s not likely to appear in Jurassic World 2. But what was the in-story reason Neill gave as to why Dr. Grant won’t be coming back to fight some dinos again? It came down to one of two things: He’s either an accountant or dead. Yeah, that got super dark, didn’t it?

This depressing hypothesis came about as Neill was being interviewed about Hunt for the Wilderpeople. When asked if he considered coming back to the dinosaur theme park business, Neill said (via /Film):

I think the problem is that no one knows where Alan Grant is anymore. He’s retired from paleontology. He’s sick to death of dinosaurs and running. He’s not quite as fleet of foot as he was, and he’s now retired to Dayton, Ohio, and has a very successful accountancy business… I think that’s what’s happened to Alan. Either that or he’s dead.

See? I wasn’t kidding when I said the explanation got pretty dark. While Dr. Grant certainly is a bit of a hero in his own right, he’s not impervious to tragedy. It’s possible (however sad and hopefully unlikely) that he met his end saving some other poor tourists from the misguided business plans of another wealthy investor elsewhere. Or, you know, he just retired and met a nice, gentle end surrounded by family and friends and maybe a raptor butler or two. I don’t know.

What I do know, though, is that life, uh … finds a way, and however unlikely it might be, I would be unsurprised (though thrilled) to see Dr. Grant pop up in one form or another in a future Jurassic World movie. Or maybe that’s just wishful thinking at this point.